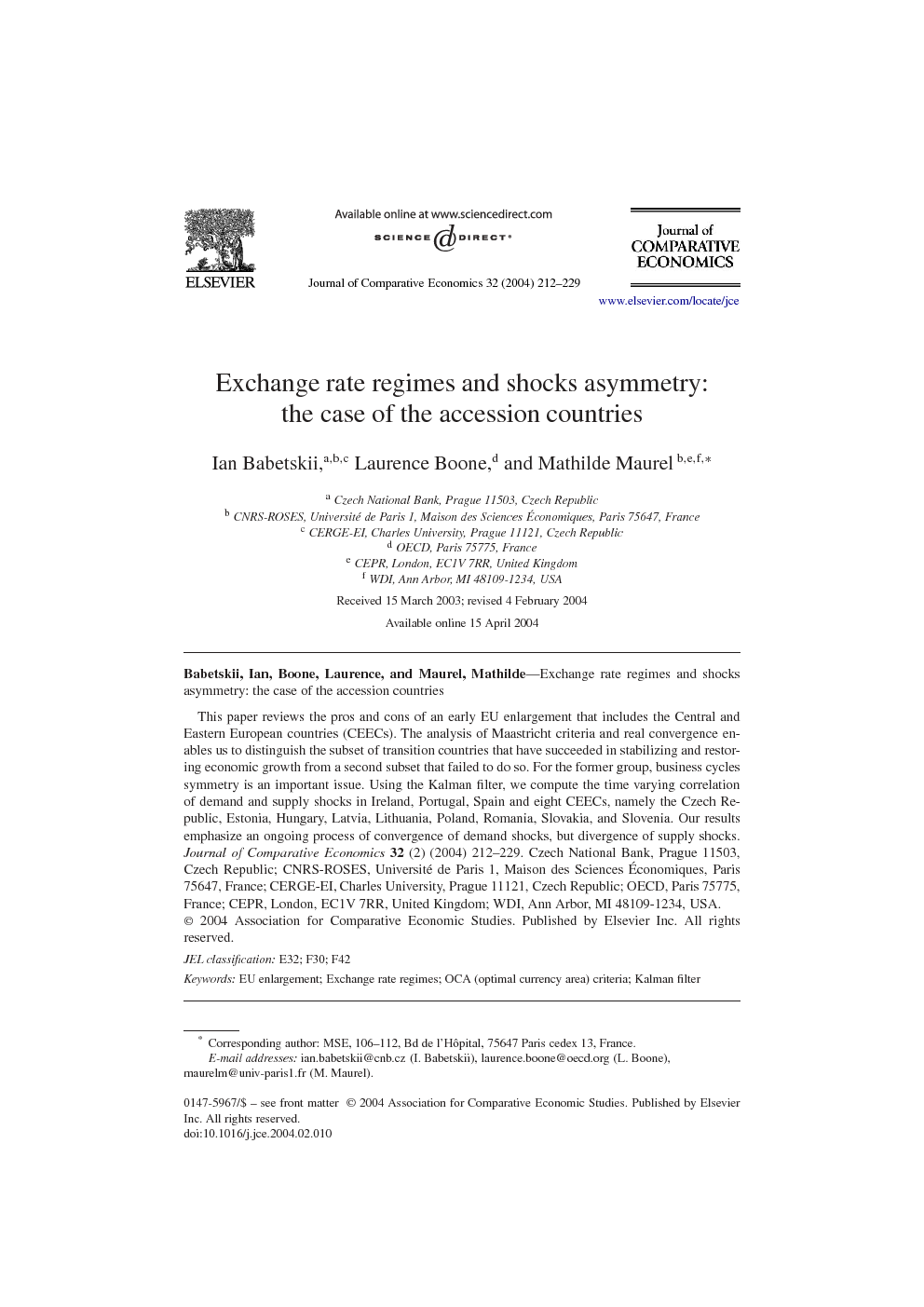 This paper reviews the pros and cons of an early EU enlargement that includes the Central and Eastern European countries (CEECs). The analysis of Maastricht criteria and real convergence enables us to distinguish the subset of transition countries that have succeeded in stabilizing and restoring economic growth from a second subset that failed to do so. For the former group, business cycles symmetry is an important issue. Using the Kalman filter, we compute the time varying correlation of demand and supply shocks in Ireland, Portugal, Spain and eight CEECs, namely the Czech Republic, Estonia, Hungary, Latvia, Lithuania, Poland, Romania, Slovakia, and Slovenia. Our results emphasize an ongoing process of convergence of demand shocks, but divergence of supply shocks. Journal of Comparative Economics32 (2) (2004) 212–229.

EU enlargement towards the East is unprecedented. The situation of the Central and Eastern European Countries (CEECs thereafter) is dramatically different from that of the previous entrants into the EU, e.g., Spain, Portugal, and Greece. First, the institutional environment in the CEECs must be improved. According to Berglöf and Roland, 1998 and Sgard, 1995, finance and banking institutions are underdeveloped, although progress has been made to reduce the gap between the CEECs and the EU countries. Second, if the CEECs enter the EU in 2004, the delay between formal candidacy and actual admission would be exceptionally short. More generally, the wide range of possible macro-economic situations, both in terms of growth and inflation, may raise questions regarding the possibility of a common policy mix. For this unprecedented enlargement, different conditions might seem, at first glance, contradictory. Maastricht criteria are not compatible with catching-up objectives because nominal exchange rate stability implies relatively high inflation for accessing countries with growth rates higher than the European average. Catching-up is measured not only in terms of macro-economic aggregates but it also has an institutional dimension that, although harder to evaluate, is essential. Nevertheless, our purpose is not to review the necessary conditions for the enlargement to be successful but rather to focus on a subset of macro-economic criteria. When joining the EU, the CEECs will have to adopt the acquis communautaire, including eventually the EMU, if not the Euro itself.1 Although this does not mean that the Maastricht criteria must be satisfied before joining the EMU, it does imply convergence and stability along these lines.2 Moreover, nominal convergence is a necessary, although not sufficient, condition for real convergence so that similarity in terms of GDP per capita and GDP volatility can serve as an additional criterion to evaluate whether joining the same economic area is in each country's interest. Finally, sharing the same monetary policy does not depend only on GDP levels but also on the similarity of business cycles. If two countries have the same business cycle around a different trend, they can share the same monetary policy. The real exchange rate can adjust to changing economic circumstances and shocks through changes in wages and prices rather than through changes in the nominal exchange rate. This paper examines the pros and cons of the CEECs joining the EMU. Section 2 discusses how the CEECs perform with respect to the traditional Maastricht criteria. Although these criteria are not required for candidate countries, they allow us to distinguish between two groups of countries. Countries having a sound macro-economic environment and in which the process of catching up is progressing are contrasted with those who still experience large imbalances and hyperinflation, so that the convergence process is lagging.3 Nominal convergence is a prerequisite for real convergence in term of GDP per capita, because economic recovery cannot occur without stabilization. For analytical purposes, Section 3 separates these two types of countries, namely those that would benefit from anchoring their currency to the Euro for stabilization purposes, e.g. Bulgaria and Romania, and those that have the option of keeping their monetary and exchange rate policies independent because stabilization has occurred. For these two groups the rationale for euroization or participation in the EMU is different. In Section 4, we use the optimal currency area (OCA) approach of Bayoumi and Eichengreen (1999) to distinguish between countries for which a common monetary policy is a useful stabilization tool and those for which the costs would outweigh the benefits. Policy implications regarding the exchange rate strategies for EU candidate countries are drawn in the concluding section.

Currently, the institutional criteria are not satisfied evenly by the CEECs; however, these criteria are not required for entrance into the EU. The current levels of inflation in these countries reflect the transition process and, as long as their rates of growth are expected to be higher than those in EU countries, keeping inflation at low levels and fixing nominal exchange rates at the same time is not appropriate; Gros (2000) contends that the inflation differential induced by the catching up process can reach three or even four percent. The evidence that some of the CEECs are subject to shocks similar to the German or EU ones is rather weak, especially on the supply side. However, the pattern of convergence observed when Spain or Portugal were candidates did not continue over the last decade. Therefore, business cycle convergence should not be overemphasized. Supply shocks are not converging, perhaps due to the Balassa–Samuelson effect operating in CEECs that are open economies not dependent on primary resources but growing fast by changing industrial structure and export composition (Ito et al., 1999). However, the absence of supply convergence is not necessarily a deterrent to EMU membership. The CEEC countries were often unable to engage in counter cyclical policy because they followed the monetary policies of the German central bank. Hence, productivity gains translate into inflation differentials endogenously. These equilibrating inflation differentials are consistent with international competitiveness and preferred to policy-induced differences in inflation rates that imperil the credibility of any exchange rate regimes. Demand shocks do converge, which is consistent with Brada and Kutan (2001), who show that CEECs were able to mimic European Central Bank policies regarding the money base growth. Like Brada and Kutan, we conclude that giving up monetary policy independence will not be so costly at the time of EU entry. Furthermore, fiscal policy was able to smooth business cycles, within the limits imposed by the Stability Pact and Maastricht criteria, for the three Baltic States (Kutan and Pautola-Mol, 2001). Although we consider the classical OCA criteria applied to the CEECs that qualify for EU entry as soon as 2004, we do not discuss the institutional aspects of that enlargement. Up to now, current EU members have not shown a strong enough intent to implement the necessary reforms to the EU budget and to institutional operations. However, a date has been set and great expectations exist in the CEECs. For enlargement to be a complete success, the conditions ensuring more rapid convergence of the CEECs must be implemented. Such a policy will not only benefit the accession countries but it will also alleviate the implied burden for the existing EU members, so that both sides can reap the full benefit of EU enlargement.