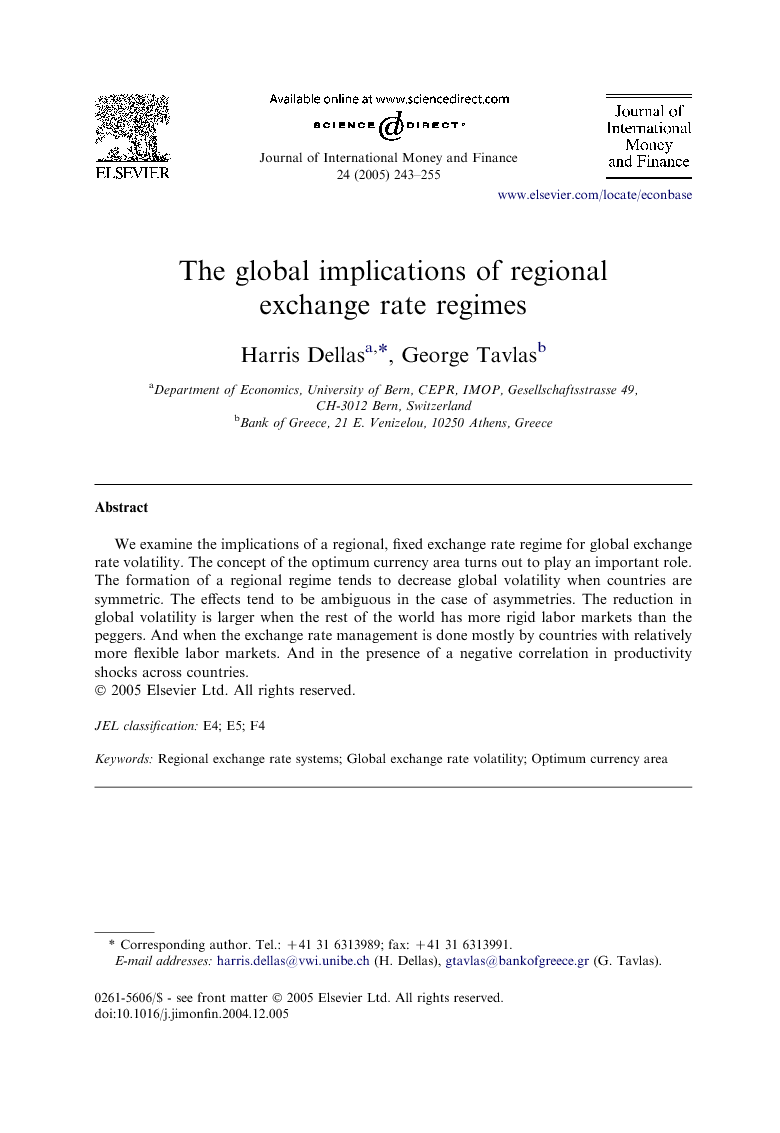 We examine the implications of a regional, fixed exchange rate regime for global exchange rate volatility. The concept of the optimum currency area turns out to play an important role. The formation of a regional regime tends to decrease global volatility when countries are symmetric. The effects tend to be ambiguous in the case of asymmetries. The reduction in global volatility is larger when the rest of the world has more rigid labor markets than the peggers. And when the exchange rate management is done mostly by countries with relatively more flexible labor markets. And in the presence of a negative correlation in productivity shocks across countries.

The post Bretton Woods international monetary arrangements have been asymmetric. Typically, some countries maintain a system of—more or less—fixed parities among themselves while, at the same time, allowing the external value of their currencies to move freely against currencies that do not belong to their monetary arrangement. We call such a regime a mixed system. The EMS and the EMU are the most important examples in recent history of such regional, mixed regimes (other examples include unilateral pegs, currency boards and so on). Although a great deal of attention has been devoted to the study of fixed and flexible exchange rate regimes as well as of monetary union1in isolation, to the best of our knowledge, no attempt has been made to study mixed systems. The objective of this paper is to fill this gap. We are mostly interested in the global implications of a regional fixed exchange rate regime and, in particular, whether such a regime leads to a global reduction of exchange rate volatility or simply transfers volatility from one part of the global system to another. Also, we examine the factors that determine the type and magnitude of volatility transfer that takes place. Note that our analysis is also applicable to currency unions, not only fixed regimes. While in principle, a currency union may seem different from a bilateral peg, in practice they have very similar properties. The answers to the questions raised above are of practical importance. For instance, they can help evaluate the contribution of the EMS (or EMU) to global exchange rate volatility (for instance, its effects on the DM/USD or the DM/GBP rate). They can also form the basis for assessing the implications of EMU for the EUR and USD exchange rates. If the formation of EMU brings about greater global stability in exchange rates by itself then there may be less of a need for explicit international policy coordination (e.g. the adoption of target zones by major currency blocks) in order to achieve such an objective. Finally, one can use our findings to think about what would happen to the rest of the world (say, China's exchange rate) if the EU, the USA and Japan decided to limit fluctuations in their exchange rates. The existing literature has not yet provided a concrete framework for thinking about these issues. And a priori, there does not seem to exist any strong presumption concerning the sign of the global effects. Volatility eliminated in one place (say, in the DM/FF rate or in economic activity in Germany) may completely disappear from the system. Alternatively, it may simply resurface elsewhere (say, in the DM/GBP rate and in British macroeconomic activity). Moreover, general arguments of the type that “…if the fixed exchange rate system lowers macroeconomic volatility in the pegging countries then it will also reduce exchange rate volatility…” may not be informative because the direction of volatility changes is not uniform across the main economic variables. We believe that these questions can be best addressed within the context of a multi-country, general equilibrium model of the type commonly used nowadays in the exchange rate literature (for examples of a two country version, see Chari et al., 2003 and Collard and Dellas, 2002). We use a three country model whose main features include perfect competition, nominal wage rigidities,2 active monetary policy (forward looking Taylor rules) and a variety of shocks (supply, fiscal and monetary). We use a generic calibration of the model that relies heavily on parameters commonly used in the literature and serves as a useful benchmark. Its purpose is to illuminate the role played by various factors that have been emphasized in the optimum currency area literature (the degree of labor market flexibility and the existence of various types of international asymmetries). We find that a regional fixed exchange rate regime tends to decrease global exchange rate volatility if there is sufficient symmetry in the world economy. The results tend to be more ambiguous in the presence of asymmetries, a factor that has been emphasized by the optimum currency area – OCA – theory. In particular, the reduction in volatility is greater when the “ins” have more flexible labor markets than the “outs”, when the pegging is done by a country with a relatively more flexible labor market and with more volatile productivity, and in the presence of negative correlation in productivity across countries. Based on the obtained relationship between country characteristics and volatility, we speculate that global exchange rate volatility would be more likely to decline under a bilateral EUR/USD targeting or if it were the US – rather than the EMU members – that unilaterally targeted the EUR/USD rate. The remainder of the paper is organized as follows. Section 1 presents the three country model. Section 2 describes the calibration and Section 3 presents the main findings.