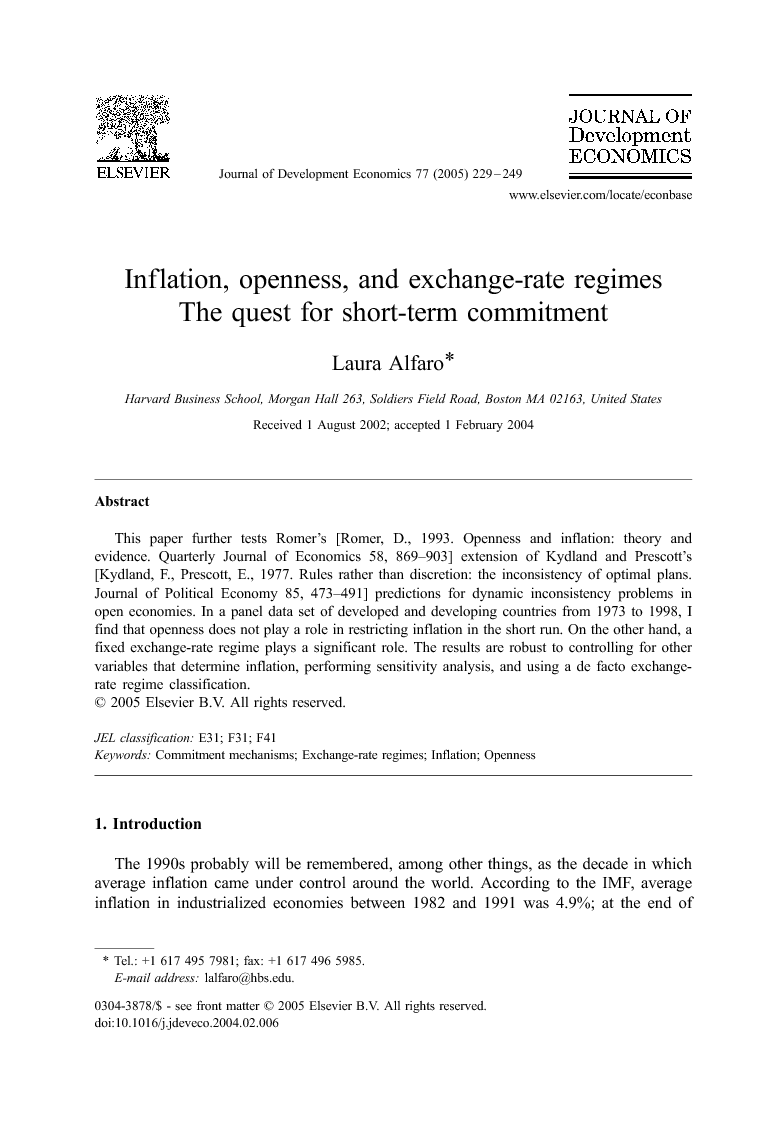 This paper further tests Romer's [Romer, D., 1993. Openness and inflation: theory and evidence. Quarterly Journal of Economics 58, 869–903] extension of Kydland and Prescott's [Kydland, F., Prescott, E., 1977. Rules rather than discretion: the inconsistency of optimal plans. Journal of Political Economy 85, 473–491] predictions for dynamic inconsistency problems in open economies. In a panel data set of developed and developing countries from 1973 to 1998, I find that openness does not play a role in restricting inflation in the short run. On the other hand, a fixed exchange-rate regime plays a significant role. The results are robust to controlling for other variables that determine inflation, performing sensitivity analysis, and using a de facto exchange-rate regime classification.

This paper demonstrates empirically the non-significant role openness seems to play as a commitment mechanism in the short term. Pegged exchange-rate regimes, however, have been associated with significantly better inflation performance. These results hold after controlling for country and time-fixed effects and using Rogoff and Reinhart's (2004) de facto exchange-rate regime classification. The negative and strong relationship between inflation and a fixed exchange-rate regime is consistent with the classical literature, which argues that fixed exchange-rate regimes impose “discipline” on individual countries, reflecting the greater observability, accountability, and transparency of the exchange rate over openness. The relationship is consistent as well with the literature on dynamic inconsistency problems, which suggest that the absence of precommitment in monetary policy leads to inefficiently high levels of inflation. A government that decides to pursue an inflationary policy risks undermining the viability of the fixed exchange-rate regime, which can constrain its intentions. There being a stronger link between the exchange rate and inflation than between inflation and openness in the short term, inflation might be more effectively restrained through economic cooperation and by integrating the design of macroeconomic policies consistent with maintaining fixed exchange rates. The message of the paper is not that a peg inconsistent with fiscal and monetary policies can achieve low, long-term, sustainable inflation. Rather, this paper argues that, in the short run, a fixed exchange rate has served as a commitment mechanism and thereby limited inflation