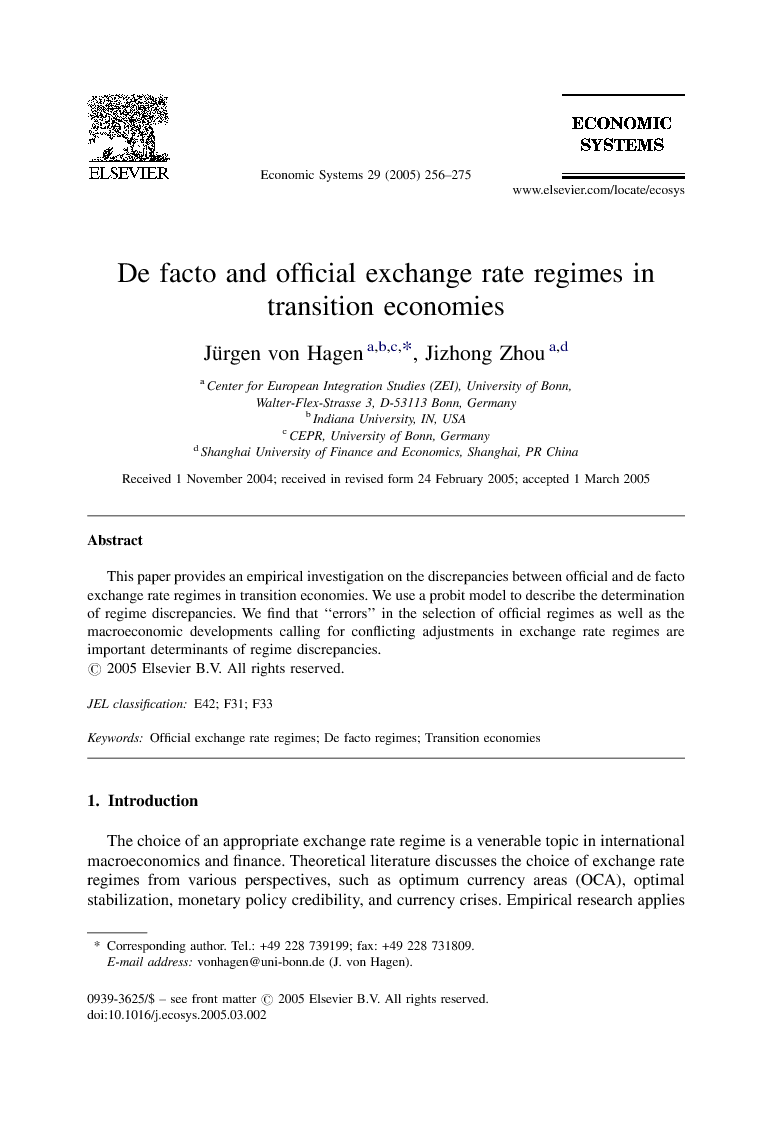 Several recent studies have pointed out that official and de facto exchange rate regimes often differ in practice. While documenting these discrepancies, the existing studies do not attempt to provide an empirical answer to the obvious question, why countries choose different official and de facto regimes. This is the purpose of the current paper. We have presented an empirical study of the choices of official and de facto exchange rate regimes of 25 transition countries during the 1990s. We have shown, first, that regime discrepancies are frequent among these countries. Furthermore, official regimes are more persistent and change in less frequent but larger steps than de facto regimes. This is consistent with the notion that official regime changes carry a cost that exceeds the cost of changing the de facto regime, and that countries use the latter as a policy instrument to adjust their exchange rate policy to macroeconomic developments earlier and faster than they respond with their official regime. We develop a discrete choice model of regime discrepancies to explain deviations between the official and the de facto regimes. A first result of interest here is that regime discrepancies respond to the inappropriateness of the observed official regime. Specifically, if a country's official regime is too rigid as suggested by our discrete choice model, its de facto regime is likely to be more flexible than its official one. Conversely, if a country's official regime is too flexible, its de facto regime is likely to be more rigid than the official one. Thus, the widespread observation of fear of floating, where countries run de facto pegs although they declare themselves officially to have floating exchange rates, reflects cases where the underlying fundamentals contained in our model favor a more rigid official exchange rate regime than that actually declared. Such a pattern could rise, if the underlying fundamentals favour fixed exchange rates, or if countries preferring exchange rate pegs are reluctant to declare official pegs because of reputational constraints and the fear of being exposed to speculative attacks. We find that countries less diversified in the commodity structure of foreign trade, with more developed financial market, or having complete exchange-rate pass-through tend to exhibit fear of floating, i.e. with flexible official regimes combined with de facto stable exchange rates. In contrast, countries with larger economic sizes, more sufficient international reserves, or larger budget deficits are more likely to show fear of pegging. Their de facto exchange rate regimes are usually more flexible than the official exchange arrangements.