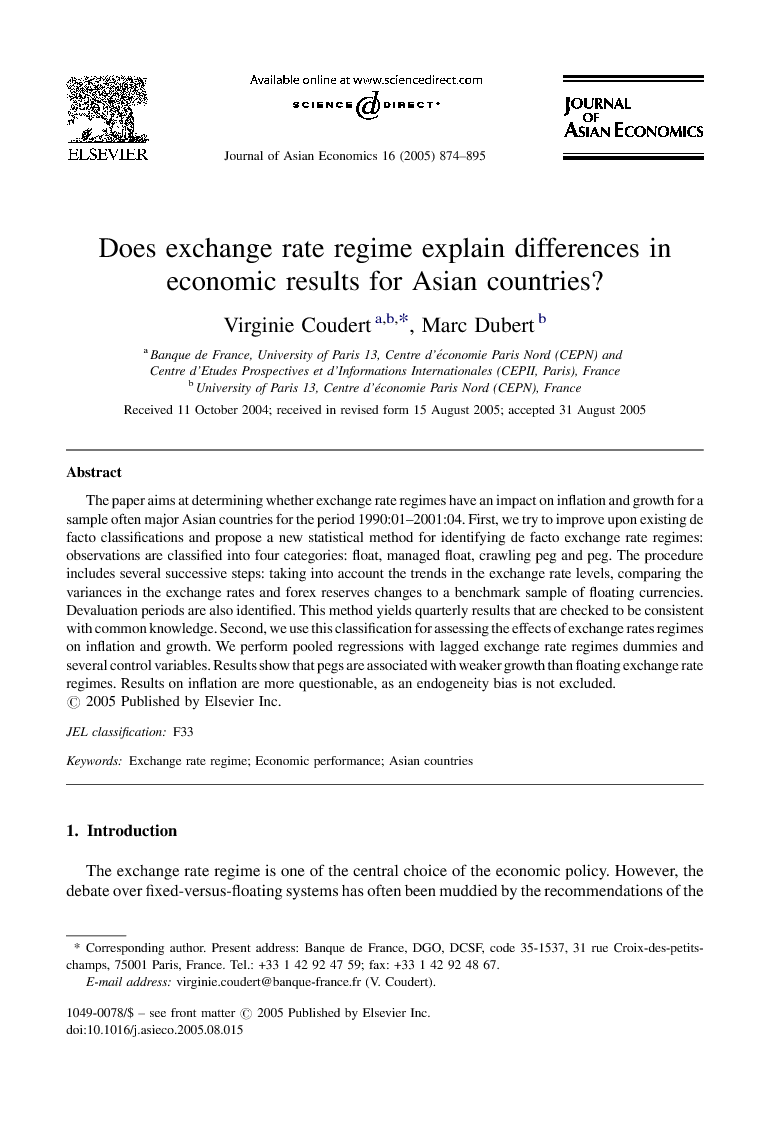 The paper aims at determining whether exchange rate regimes have an impact on inflation and growth for a sample often major Asian countries for the period 1990:01–2001:04. First, we try to improve upon existing de facto classifications and propose a new statistical method for identifying de facto exchange rate regimes: observations are classified into four categories: float, managed float, crawling peg and peg. The procedure includes several successive steps: taking into account the trends in the exchange rate levels, comparing the variances in the exchange rates and forex reserves changes to a benchmark sample of floating currencies. Devaluation periods are also identified. This method yields quarterly results that are checked to be consistent with common knowledge. Second, we use this classification for assessing the effects of exchange rates regimes on inflation and growth. We perform pooled regressions with lagged exchange rate regimes dummies and several control variables. Results show that pegs are associated with weaker growth than floating exchange rate regimes. Results on inflation are more questionable, as an endogeneity bias is not excluded.

The exchange rate regime is one of the central choice of the economic policy. However, the debate over fixed-versus-floating systems has often been muddied by the recommendations of the International Monetary Fund (IMF), which have shifted according to circumstances. In the wake of the 1997 Asian crisis, the IMF accused “soft” pegs, not really of playing a part in the Asian meltdown, but of amplifying the cost of the crisis. It is true that pegged exchange rates encouraged growth in unhedged foreign-currency debt and currency mismatch of balance sheets. This pushed up the costs of devaluation for borrowers, triggering chains of business and bank failures. These events, together with the massive losses incurred by the monetary authorities as they sought to defend their exchange rates from speculative attack, resulted in an even higher bill for the crisis resolution and, hence, played a role in the ensuing IMF's doctrinal shift. Having long supported fixed exchange rate regimes as a weapon in the fight against inflation, the IMF turned to “corner” solutions, based on hard pegs – currency boards or dollarisation – or pure floats, in the late nineties (Fischer, 2001). However, there was another shift of doctrine, after the Argentine crisis in 2001–2002. Since that time, the IMF has stopped recommending currency boards as a credible solution and has switched to its current doctrine of floating arrangements with inflation targeting (Rogoff, Husain, Mody, Brooks, & Oomes, 2003). Such changes in recommendations show the great uncertainty, that still undermines this issue. Accordingly, the debate must be recast to include research that analyses countries’ macroeconomic performances according to their exchange rate regime. In theory, the nominal regime should be able to influence inflation, by creating an external anchor for the currency, and thus have a neutral impact on long-term growth. However, in the medium run, keeping exchange rates fixed may bring about real appreciation and affect macroeconomic performance. To briefly sum up this long debate, let us go back to Obsfeld and Rogoff (1995), whose article, “The Mirage of Fixed Exchange Rates”, warns against fixed regimes. Their paper argues that such systems last on average for a couple of years and are regularly followed by a collapse in the exchange rate and a currency crisis. In countries with stubborn inflation, a fixed exchange rate often causes the real exchange rate to become overvalued. This turns out to be unsustainable in the medium term, leaving the regime vulnerable to speculative attack. Williamson (2000) therefore recommends making fixed exchange rate regimes more flexible by introducing soft crawling bands pegged to currency baskets. In her famous article, “The Mirage of Floating Exchange Rates”, Reinhart (2000) says that floating rates are even more of a delusion than fixed ones, for the simple reason that they do not exist. Looking at a large sample of countries, she demonstrates that no emerging country actually allows its exchange rate to float, because the governments of these countries suffer from what Calvo and Reinhart (2002) dubbed the “fear of floating”. This subject has spawned an ample literature. But in the end, few empirical studies have considered the issue of how exchange rate regimes affect countries’ economic performances. Most existing studies to offer a statistical analysis of this question are those commissioned by the IMF: Ghosh, Gulde, Ostry, and Wolf (1997) and Levy-Yeyati and Sturzenegger (2001), Rogoff et al. (2003). In this paper, we have focused on a sample of ten Asian countries – China, South Korea, Hong Kong, India, Indonesia, Malaysia, Pakistan, the Philippines, Singapore and Thailand – over the period 1990–2001. This sample is of particular interest, for several reasons. First, these countries employed a diverse array of exchange rate systems during the period under review. Second, they share common features that allow a comparative analysis: export-oriented strategies, which involve an active exchange rate policy, high growth, common chocks, high attractivity for foreign investment. Third, the crisis that marked this period allows to test the vulnerability of different regimes to speculative attacks. An important preliminary stage of this study was to identify the “de facto” exchange rate regimes in each country. The recent literature contains several methods for this, notably those of Calvo and Reinhart (2002), and Levy-Yeyati and Sturzenegger, 2005 and Levy-Yeyati and Sturzenegger, 2003. However, having conducted a critical examination of these methods, we opted to construct one of our own, explained in detail below. The second stage consisted in performing an econometric analysis of the macroeconomic performances of countries according to their identified exchange rate regime. We concentrate on the results in terms of growth and inflation. The rest of this paper is organised as follows. Section 2 describes the methods used in the economic literature to identify the de facto regimes actually in use in different countries. Section 3 explains and justifies our method. Section 4 sets out the findings and compares them with those of the other available studies. Section 5 consists of an econometric analysis of the effects of exchange rate regimes. Section six concludes.

This analysis brings light to bear on several interesting aspects of the de facto regimes followed by Asian countries in the 1990s and the linkage between these regimes and macroeconomic performance. By putting forward a new method of classifying countries by exchange rate regime, based on statistical observation, we avoid the pitfalls of the existing approaches and can thus trace accurately the presence of different regimes across the period. Like Calvo and Reinhart (2000), we found major discrepancies between what countries said they did in terms of their exchange rate policy and what they actually did. Our classification highlights the policy of pegging to the US dollar that most Asian countries followed until the 1997 crisis. It also clearly demonstrates that the Asian countries loosened their exchange rate policies in the aftermath of the 1997 devaluations, which is consistent with the findings of Hernandez and Montiel (2001). The econometric results show that fixed exchange rate regimes are associated to better performances in terms of inflation. This confirms those of previous studies, as those of Levy-Yeyati and Sturzenegger (2001) and of Ghosh et al. (1997). This result appears here more clearly because, thanks to a quarterly classification, we are able to separate the periods of peg – which are associated with low inflation – from the ruptures of anchoring, which generally correspond to devaluations generating a strong inflationary effect. Nevertheless, we cannot exclude the hypothesis of an endogeneity bias, by which countries with low inflation are more likely to choose a pegged exchange rate. The regressions also show that pegs dampened GDP growth, compared to managed floats. This result persists after correcting for endogeneity. Furthermore, pegs are sometimes followed by severe devaluation, which causes growth to collapse, in the concerned countries. Floating regimes are shown to be linked to mitigate results. On one hand, pure floats do not allow better performances than crawling pegs. On the other hand, managed floats produce moderate growth performances and high inflation. Finally, crawling pegs appear to be a reasonable option: they yield average GDP growth and intermediate results in terms of inflation. These results are consistent with those of Williamson (2000), who found that intermediate arrangements were the most suitable for emerging economies.