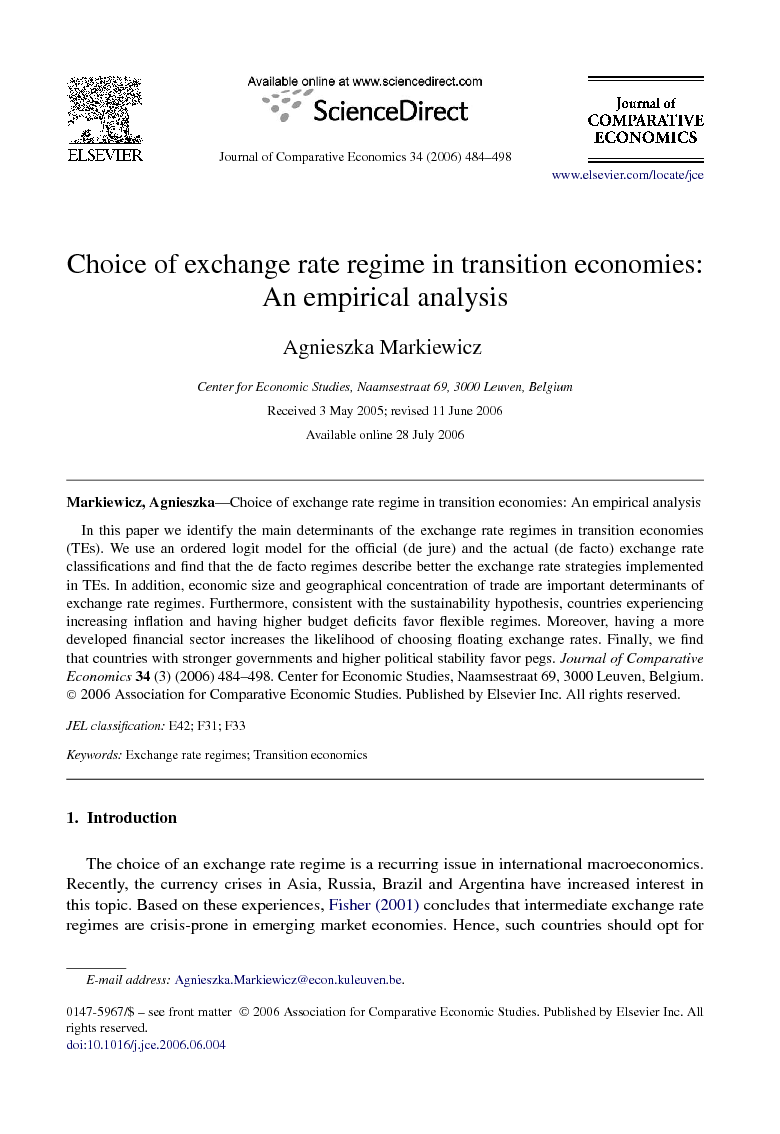 In this paper we identify the main determinants of the exchange rate regimes in transition economies (TEs). We use an ordered logit model for the official (de jure) and the actual (de facto) exchange rate classifications and find that the de facto regimes describe better the exchange rate strategies implemented in TEs. In addition, economic size and geographical concentration of trade are important determinants of exchange rate regimes. Furthermore, consistent with the sustainability hypothesis, countries experiencing increasing inflation and having higher budget deficits favor flexible regimes. Moreover, having a more developed financial sector increases the likelihood of choosing floating exchange rates. Finally, we find that countries with stronger governments and higher political stability favor pegs. Journal of Comparative Economics34 (3) (2006) 484–498.

The choice of an exchange rate regime is a recurring issue in international macroeconomics. Recently, the currency crises in Asia, Russia, Brazil and Argentina have increased interest in this topic. Based on these experiences, Fisher (2001) concludes that intermediate exchange rate regimes are crisis-prone in emerging market economies. Hence, such countries should opt for the corner solutions of the spectrum of exchange rate regimes, namely either hard pegs or pure floats.1 As a subset of emerging market economies, transition economies (TEs) are moving from a centralized economy to an open market economy. As such, these countries are embarking on economic reforms that aim at improved economic performance levels along with transparency and efficiency in the capital markets. However, this group of countries is not homogeneous. Some TEs, e.g., the new European Union (EU) members, have virtually finalized their transition process. Others, e.g., the Commonwealth of Independent States (CIS), have implemented stabilizing reforms relatively recently. Exchange rate regimes also differ considerably among TEs with countries choosing currency pegs or free floats or variations in between. In this paper, we investigate the determinants of exchange rate regimes in TEs, proceeding in two steps. First, we consider both modern and traditional approaches to the choice of an exchange rate regime and compare their abilities to explain the existing exchange rate regimes in TEs. The traditional approach consists of the theory of an optimum currency area (OCA) pioneered by Mundell (1961) and McKinnon (1963). Among the modern perspectives, we consider the impossible trinity view, the currency crises approach, and the political economy view. Second, we classify the choice of exchange rate regime according to the officially announced or de jure type and the actually implemented or de facto policy. Calvo and Reinhart (2002) demonstrate that the lack of credibility of monetary authorities in emerging economies often leads to a fear of floating phenomenon. As a result, many countries that announce floating exchange rate strategies do not apply them in reality. Alternatively, Levy-Yeyati and Sturzenegger (2005) argue that a country can manifest a fear of pegging behavior by claiming to have a pegged exchange rate but undertaking frequent changes in parity. We take into account these potential discrepancies by using both de jure and de facto classifications. Furthermore, we enlarge the scope of classification of exchange rate regimes by distinguishing between a hard peg and a soft peg. This additional category is important to the corner-solution hypothesis, according to which, the authorities' commitment to the peg is crucial for the sustainability of the fixed exchange rate. To test these hypotheses, we use an ordered logit model for an unbalanced panel of 23 TEs between 1993 and 2002.2 Our reason for choosing 1993 as the starting date is unavailability of data for earlier years. The remainder of the paper is organized as follows. In the second section, we describe the evolution of exchange rate strategies in TEs and the discrepancies between de facto and de jure classifications in these countries. In Section 3, we review the theoretical hypotheses based on the different approaches to the choice of an exchange rate regime. In Section 4, we develop the baseline econometric model and we present the results of our estimations in Section 5. Finally, Section 6 concludes with policy implications.

In this study, we identify the determinants of exchange rate strategies in TEs. To avoid potentially misleading classification, we use two different measures of the dependent variable, namely the official (de jure) and actual (de facto) choice of exchange rate regimes. In addition, we consider the relevance of variables suggested by traditional and modern theories of exchange rates using an ordered logit framework to test the validity of the resulting hypotheses. The estimations of the de jure and the de facto specifications generate different results. In particular, the de facto model produces a better fit and does not have the puzzling result for political variables found in the de jure specification. Hence, the de facto categories are preferable descriptions of exchange rate policies in TEs so that we focus on the results obtained using this classification. Although de facto exchange rate regimes are affected by most of the variables suggested by traditional and modern theories, our measures have different units so that we cannot assess their relative importance. However, we can discern the statistically significant determinants of the choice of exchange rate regimes in TEs between 1993 and 2002. Confirming OCA theory, a fixed exchange rate regime is associated with smaller economies. However, contradicting OCA theory, a country is less likely to adopt a fixed exchange rate if its external trade is highly concentrated with the EU. We interpret this result to indicate that open economies with high geographical concentration of trade are more vulnerable to external shocks. These shocks make it more difficult to sustain pegs; hence, the likelihood of these countries adopting rigid regimes is reduced. Consistent with the sustainability hypothesis, we find that higher inflation and a higher budget deficit decrease the probability of a country adopting a pegged exchange rate. In addition, having a more developed financial sector increases the likelihood that a country will choose a floating exchange rate. Moreover, the link between political conditions in TEs and the choice of an exchange rate regime is consistent in the de facto specification but not in the de jure one. Both stronger governments and higher political stability favor actual use of pegs even though the two effects work in opposite directions when the announced policy is considered. Finally, the CEECs have a significantly higher tendency to adopt an actual flexible regime than do the other TEs.