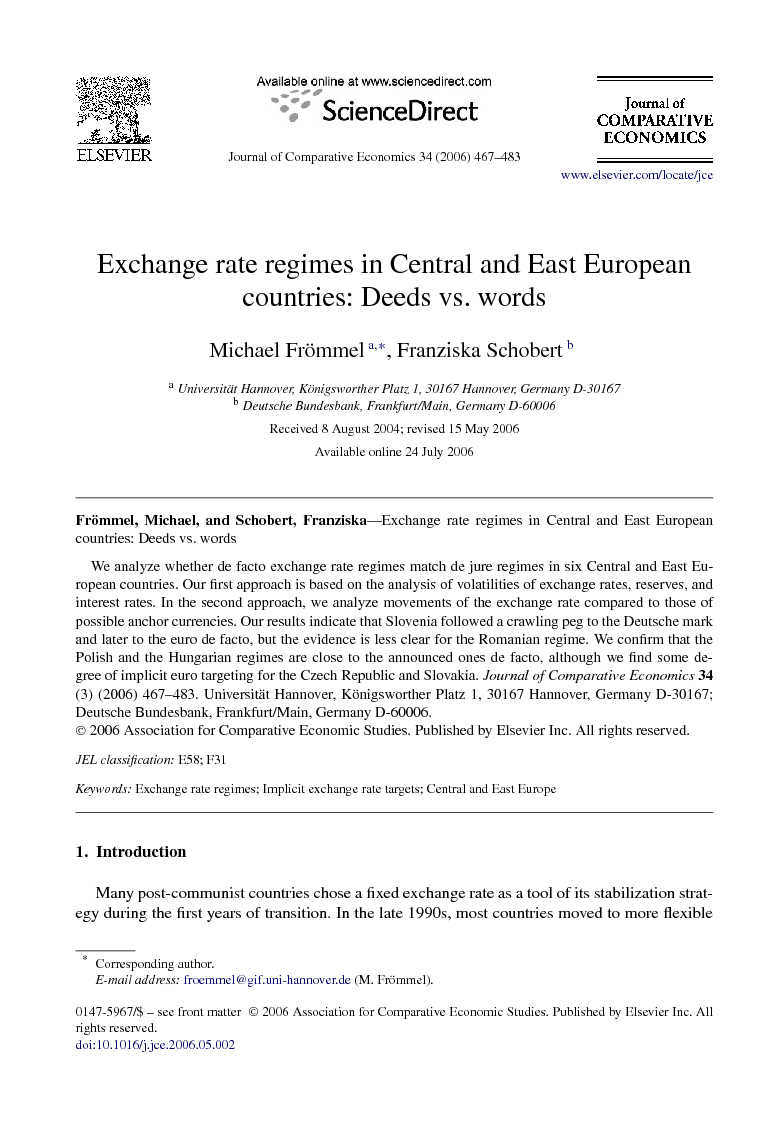 We analyze whether de facto exchange rate regimes match de jure regimes in six Central and East European countries. Our first approach is based on the analysis of volatilities of exchange rates, reserves, and interest rates. In the second approach, we analyze movements of the exchange rate compared to those of possible anchor currencies. Our results indicate that Slovenia followed a crawling peg to the Deutsche mark and later to the euro de facto, but the evidence is less clear for the Romanian regime. We confirm that the Polish and the Hungarian regimes are close to the announced ones de facto, although we find some degree of implicit euro targeting for the Czech Republic and Slovakia. Journal of Comparative Economics34 (3) (2006) 467–483.

Our paper is a contribution to the existing literature on de jure versus de facto exchange rate regimes in Central and East European countries in that we combine two approaches. First, we analyze relative volatilities of exchange rate changes to reserves and interest rates following Hausmann et al. (2001). Then, we analyze the movement of the exchange rate compared to possible anchor currencies using a general econometric approach proposed by Frankel et al. (2001). This dual approach allows us to determine the de facto exchange rate regimes from a quantitative analysis and to perform various statistical tests. Our findings indicate that the Slovenian regime has the weakest match with its official policy. Our results indicate that the IMF's classification as a crawling peg is the de facto regime in Slovenia. In contrast, we cannot confirm the Romanian regime as a de facto crawling peg. Rather, our results suggest that, from time to time, the Romanian regime appears to be a crawling peg using a basket of euro and US dollar. Nonetheless, we cannot confirm the official announced managed float for Romania. Perhaps, the best interpretation of the Romanian regime is an unsuccessful de facto crawling peg. Our findings do confirm that the Polish zloty and the Hungarian forint have behaved according to their officially announced regimes during periods of more exchange rate flexibility, while the Czech and Slovak regimes exhibit limited implicit Deutsche mark or euro targeting within a horizontal band. Our results offer some policy implications concerning the preparation for entering the EMU to supplement the results in von Hagen and Zhou (2004). Due to its implicit crawling peg regime, Slovenia has exhibited some hysteresis in inflation. It must now tackle the task of staying within ERM-2 and, at the same time, achieve the inflation criterion for joining EMU. Romania is challenged with building up the credibility of its exchange rate regime before joining ERM-2. The Romanian authorities must choose either to move to a clear managed float or to shift the implicit anchor to the euro only rather than a basket of the euro and the US dollar. The Czech and Slovak regimes have mirrored implicitly the ERM-2 in that their exchange rates to the euro and Deutsche mark stayed within a ±15%±15% band around an average exchange rate since they shifted to managed floats. Last but not least, remaining successfully within ERM-2 will depend not only on past experience but also on a sustainable policy mix.