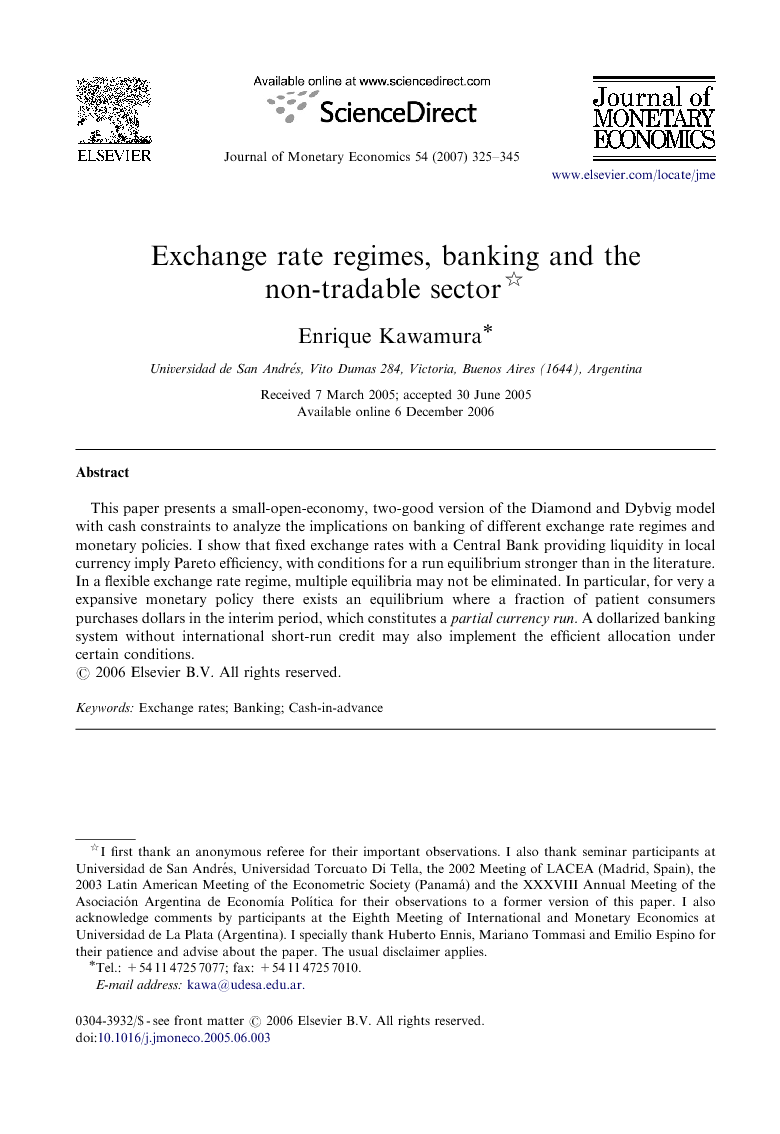 This paper presents a small-open-economy, two-good version of the Diamond and Dybvig model with cash constraints to analyze the implications on banking of different exchange rate regimes and monetary policies. I show that fixed exchange rates with a Central Bank providing liquidity in local currency imply Pareto efficiency, with conditions for a run equilibrium stronger than in the literature. In a flexible exchange rate regime, multiple equilibria may not be eliminated. In particular, for very a expansive monetary policy there exists an equilibrium where a fraction of patient consumers purchases dollars in the interim period, which constitutes a partial currency run. A dollarized banking system without international short-run credit may also implement the efficient allocation under certain conditions.

This paper has developed a small-open-economy version of the Diamond and Dybvig (1983) model with two commodities and cash-in-advance constraints, to analyze the interaction between banks, exchange rate regimes and monetary policy. This model generates the following results (all of which are clearly different from the literature). In a banking system with deposits in local currency, fixed exchange rates with a Central Bank issuing non-convertible pesos for transactions in the non-tradeable good market, conditions for self-fulfilling currency runs are more demanding than in the literature. Those conditions essentially depend on preferences, features of the first-best allocation, the liquidation policy of the non-tradeable good technology and the monetary policy in the interim period. The second important result is that, given a sufficiently expansive monetary policy, a flexible exchange rate regime does not eliminate multiple equilibria (although still eliminating bank failures) provided that the productivity of the non-tradeable sector is large enough. This regime generates a new type of inefficient equilibrium, one where banks do not fail but where impatient consumers bear the cost of the very expansive monetary policy. Finally, a dollarized banking system with no international short run credit implements the optimal allocation under certain conditions. This framework can be extended to consider other questions that are relevant. Specially important seems to consider solvency shocks to banks's investment and crisis due to fundamentals, as analyzed by Allen and Gale, 1998 and Allen and Gale, 2000b. They show that flexible exchange rates may imply better risk-sharing than nominal pegs. It seems relevant to extend such a one-good model to a framework considering one non-tradeable commodity and fiat currency as a mean-of-exchange, like in this paper, to evaluate the robustness of that result to these modifications. Also, this framework has also a natural two-country extension. This is interesting to study the interaction between international banks, monetary and exchange rate policies and the possibility of contagion, as studied in the real version of the Diamond and Dybvig framework in Allen and Gale (2000a). Perhaps one of the most fundamental limitations of this model is the assumption of ad hoc cash-in-advance constraints. The model takes this assumption as given to address issues on the relationship between banks and monetary and exchange rate policies. Although not completely satisfactory, the cash-in-advance approach adds at least a more explicit role for money, which was absent in the banking literature available up-to-date. However, in this economy money cannot be considered as essential, at least in the sense of Wallace (2000). The ad hoc assumption is specially problematic if we want to study, for example, the interaction between currency substitution and monetary and exchange rate policies and banking stability. This calls for endogeneizing the use of money for transactions, as studied by the growing search literature starting from Kiyotaki and Wright (1989). However, this implies a modeling a Diamond–Dybvig banking system with infinitely-lived households, which to my knowledge was not fully addressed in a satisfactory manner. This last extension seems much more complicated to construct.