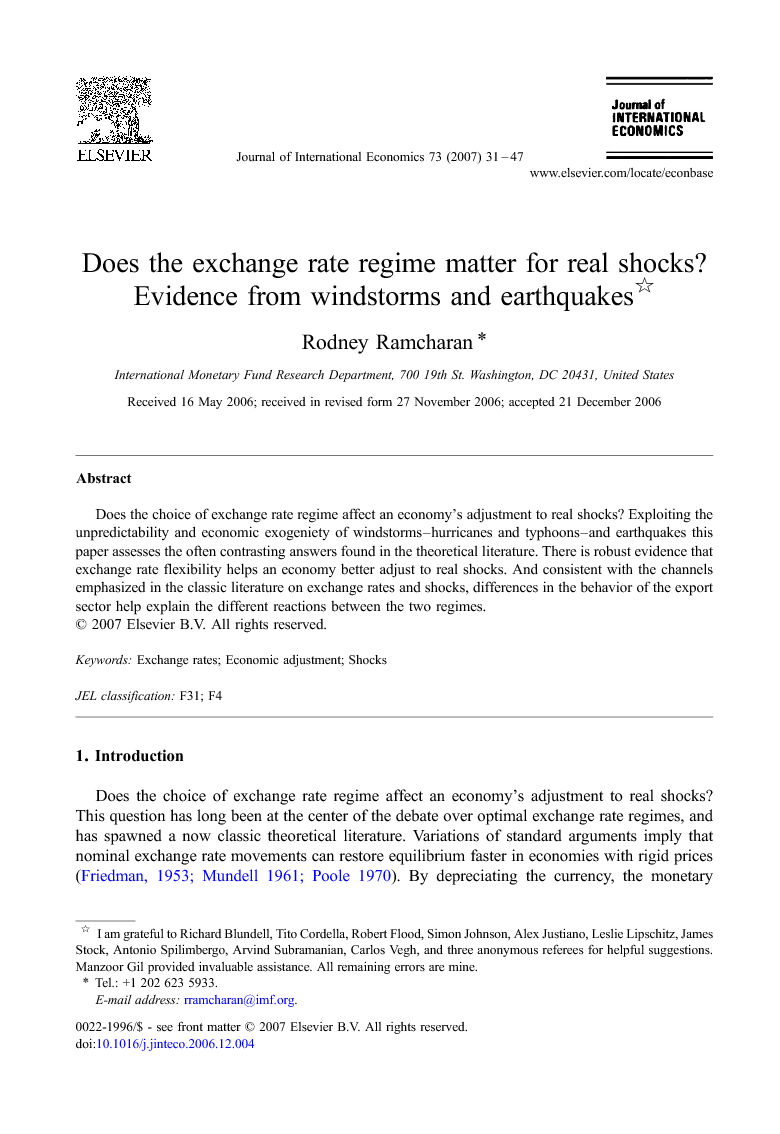 Does the choice of exchange rate regime affect an economy's adjustment to real shocks? Exploiting the unpredictability and economic exogeniety of windstorms–hurricanes and typhoons–and earthquakes this paper assesses the often contrasting answers found in the theoretical literature. There is robust evidence that exchange rate flexibility helps an economy better adjust to real shocks. And consistent with the channels emphasized in the classic literature on exchange rates and shocks, differences in the behavior of the export sector help explain the different reactions between the two regimes.

Windstorms and earthquakes disrupt economic activity, are easily observable, and are inherently unpredictable. This paper has exploited these features to understand better the relationship between the choice of the exchange rate regime and the economic adjustment to real adverse shocks in a large panel of developing countries. There is robust evidence that exchange rate flexibility can help mitigate the impact of these shocks. Across a wide variety of specifications, recovery after these events is significantly faster and larger in flexible rate regimes. The evidence also indicates that the response of the export sector in flexible rate regimes is again both bigger and faster—consistent with the classic adjustment through a depreciation of the exchange rate. In both regimes however, fiscal policy appears to be equally procyclical. If one is willing to believe that natural disasters resemble other real economic shocks–a defensible belief given the nature of these shocks and the similarities between these results and those obtained using the terms of trade in the literature–then this evidence suggest that the choice of exchange rate regime can have large consequences for economies the experience adverse real shocks. And the classic prescription of exchange rate flexibility to counter the effects of real shocks in developing countries can be welfare improving, especially for those economies where the shocks are large and frequent. Of course, the reaction to real shocks is one of several factors when deciding upon optimal exchange rate policy, and these results add to rather than settle the debate. Indeed, these findings should be interpreted with some care. The observability and unpredictability of natural disasters are helpful in identifying the role of the exchange rate regime in the adjustment process, but the economic damage caused by these shocks can depend on the existing level of social vulnerability (Pielke and Pielke, 1997). Social vulnerability remains a nebulous concept at the macro level—building codes, construction standards and the like. And although I have included many plausible macroeconomic controls, these results could still be biased to the extent that the unobserved component of social vulnerability is correlated with the choice of exchange rate regime. That said, the long run implications of the different adjustment mechanisms across exchange rate regimes is an important area of future research. Small developing countries frequently experience adverse real shocks. Does the bigger and faster export response to these shocks significantly impact long run development in flexible rate regimes? Separately, fiscal policy appears to be equally procyclical across exchange rate regimes. But because of the different output responses, does the reaction of long term debt levels to real shocks differ across regimes?