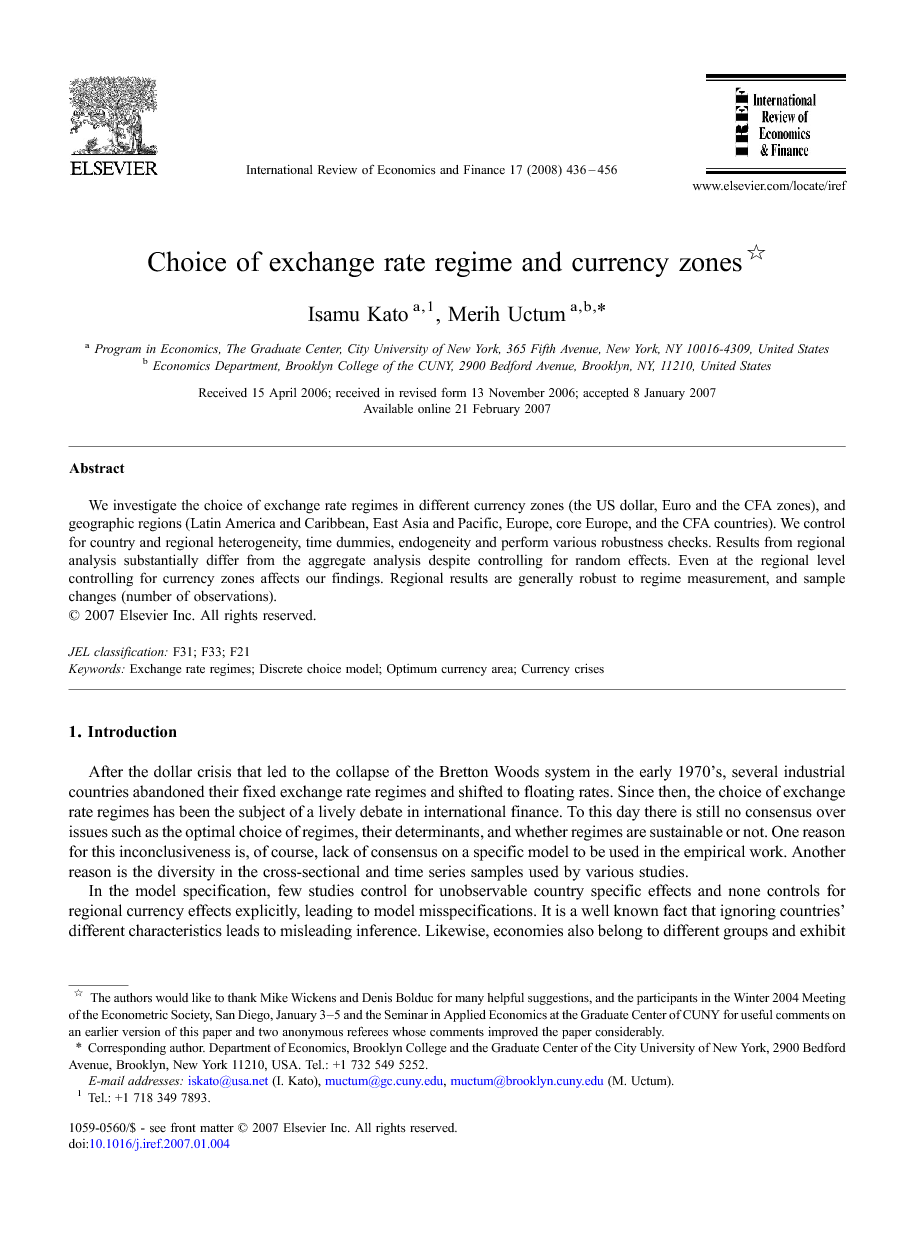 We investigate the choice of exchange rate regimes in different currency zones (the US dollar, Euro and the CFA zones), and geographic regions (Latin America and Caribbean, East Asia and Pacific, Europe, core Europe, and the CFA countries). We control for country and regional heterogeneity, time dummies, endogeneity and perform various robustness checks. Results from regional analysis substantially differ from the aggregate analysis despite controlling for random effects. Even at the regional level controlling for currency zones affects our findings. Regional results are generally robust to regime measurement, and sample changes (number of observations).

After the dollar crisis that led to the collapse of the Bretton Woods system in the early 1970's, several industrial countries abandoned their fixed exchange rate regimes and shifted to floating rates. Since then, the choice of exchange rate regimes has been the subject of a lively debate in international finance. To this day there is still no consensus over issues such as the optimal choice of regimes, their determinants, and whether regimes are sustainable or not. One reason for this inconclusiveness is, of course, lack of consensus on a specific model to be used in the empirical work. Another reason is the diversity in the cross-sectional and time series samples used by various studies. In the model specification, few studies control for unobservable country specific effects and none controls for regional currency effects explicitly, leading to model misspecifications. It is a well known fact that ignoring countries' different characteristics leads to misleading inference. Likewise, economies also belong to different groups and exhibit group characteristics. More specifically, a number of currency zones exist in the world, and many currencies are linked to currencies other than the US dollar. Shocks that affect the euro area for example, are not necessarily the same as the ones hitting the dollar area because the anchor currency country is likely to have a greater impact on member countries of the currency zone than the United States. The existing studies on exchange rate regime determination lump all foreign variables into a single “foreign country”, which consists of either the United States or an average of the OECD countries. This methodology implicitly assumes the US economy or the OECD is the key external factor for all currencies. Not recognizing this currency-zone effect is likely to bias the results by introducing cross-sectional dependence into the analysis. This paper attempts at filling this gap by investigating whether these two types of heterogeneity play a role in the determination of the exchange rate regimes. The first objective of this paper is, therefore, to decompose the choice of exchange rate regime into components attributable to the effects of observed variables and unobserved heterogeneity. We find that in most cases, controlling for country heterogeneity affects estimates. The second and more important objective goes one step further and aims to explore the differences attributable to different currency zones. This represents a major departure from the existing studies because our analysis covers three distinct currency zones. The currency zones we consider consist of countries that tie their currencies to the US dollar, those that anchor to the ECU/euro, and the countries belonging to the franc zone of the African financial community, the CFA franc zone, which linked their currencies to the French franc and now to the Euro. For each zone, we compute the foreign variables with respect to the anchor currency country's variables.2 Our findings show that results controlling currency zone/regional analysis can substantially differ from the aggregate analysis even when country-specific effects are accounted for. The second reason that contributes to inconclusiveness in the literature is the variety of period averages used in the existing studies. These analyses are based on period averages, and treat the choice of the exchange rate regime as permanent throughout the sample period. Although this methodology is believed to help avoiding business cycle effects and biases due to autocorrelation and simultaneity problems, it is undesirable for several reasons. First, it throws away valuable information and eliminates the dynamic interaction of different factors. Over a period of 15–20 years, very few countries stick to their choice, and a majority changes it more than once to respond to domestic and foreign shocks to the economy. As a result of this fact, empirical results also change depending on which period average is used and where the cutoff point is set. Second, it is not clear that even the business cycle effects are eliminated since the cutoff point for time averaging is arbitrary and cycles may last through any two time intervals. To capture the change in countries' choice of exchange rate regime and control for factors affecting the choice, we favored using a larger data span than typical in these studies, and keep its time dimension. This allows us to take into account both the time series characteristics of the data as well as their cross-section aspects. We perform several robustness tests and check the sensitivity of the results to factors such as regime categorization (de facto versus de jure), sample specification, and also time series characteristics such as regime persistence, multicollinearity, and endogeneity. Our findings indicate significant differences between pooled data, which does not differentiate between currency zones, and individual currency zones. Country size is in general robust across the groups and results show that as countries grow, they tend to choose more flexible rates. Exchange rate volatility is a significant determinant in Europe, Latin America and Caribbean (LAC), and in the CFA countries where it increases the probability of choosing relatively flexible regimes. It is significant in East Asia and Pacific (EAP) countries only if the Asian crisis is controlled for. Openness and inflation unambiguously affect the regime choice in LAC, CFA, the EAP regions and inflation in CFA and the LAC regions. This is in contrast to pooled sample results where they are not robust to sample change. Finally, although we find a general move towards relatively flexible rates, in both Latin America and Europe, the end of the 1990s are marked by the return of relatively fixed regimes. Our findings thus indicate that full sample results can mask regional differences and should be dealt with cautiously, in particular by controlling for geographical/regional idiosyncrasies.

In this paper we examine countries' choice of exchange rate regimes with an ordered choice variable analysis. Within a framework of optimal currency area, we consider three different currency blocks, the US dollar–consisting of the Latin America and the Caribbean (LAC), and the East Asian and Pacific (EAP) regions–, the EU (ECU/Euro) area, and the CFA franc region. By breaking down the data in currency blocks, we control for one type of regional heterogeneity in the sample. We run various robustness checks, including different sample length, different country samples, comparison of de jure and de facto measures of exchange rate regimes. Our methodology, data span and the comparison of different currency zones provide a framework that allows a detailed analysis of the exchange rate regimes. Our findings suggest that, even when we control for factors such as unobservable country heterogeneity, time dummies, and different samples, substantial regional differences remain, a result that calls for disaggregation of the data such as currency zones. The pooled results indicate that among the explanatory variables analyzed, openness, exchange rate volatility and the institutional variables are the most likely to affect the exchange rate choice of a country. Inflation and GDP are significant only in the full sample. However, these results mask the differences at the regional level. The GDP is consistently an important determinant of the exchange regime determination in all currency zones. Openness is an important determinant in EAP, exchange rate volatility in EU15 and LAC, and inflation in the full samples of CFA and LAC, after 1985 in EAP and EU15. We also show that samples incorporating countries with a single regime often lead to different conclusions than samples consisting of only countries with variation in the regimes. In the EU zone, adding the floaters to the sample increases the significance of openness and the volatility of real exchange rate. In the LAC area, adding pure pegs increases the significance of inflation differential and capital flows, consistent with the view that currency boards and hard fixes provide low inflation and lead to greater international financial integration due to lower risk of exchange rate uncertainty. By contrast, adding the pegs to the sample in the EAP region reduces the significance of openness and capital flows if the period after 1997 is included, reflecting the disturbance caused by the Asian crisis.