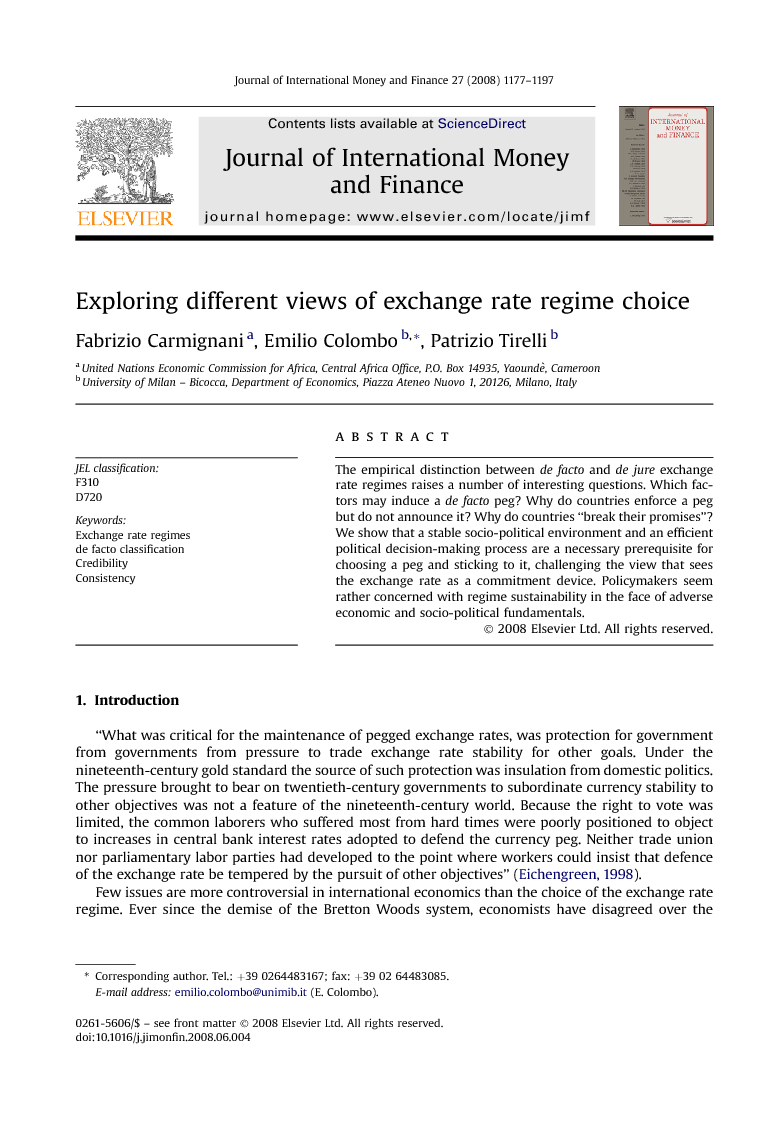 The empirical distinction between de facto and de jure exchange rate regimes raises a number of interesting questions. Which factors may induce a de facto peg? Why do countries enforce a peg but do not announce it? Why do countries “break their promises”? We show that a stable socio-political environment and an efficient political decision-making process are a necessary prerequisite for choosing a peg and sticking to it, challenging the view that sees the exchange rate as a commitment device. Policymakers seem rather concerned with regime sustainability in the face of adverse economic and socio-political fundamentals.

“What was critical for the maintenance of pegged exchange rates, was protection for government from governments from pressure to trade exchange rate stability for other goals. Under the nineteenth-century gold standard the source of such protection was insulation from domestic politics. The pressure brought to bear on twentieth-century governments to subordinate currency stability to other objectives was not a feature of the nineteenth-century world. Because the right to vote was limited, the common laborers who suffered most from hard times were poorly positioned to object to increases in central bank interest rates adopted to defend the currency peg. Neither trade union nor parliamentary labor parties had developed to the point where workers could insist that defence of the exchange rate be tempered by the pursuit of other objectives” (Eichengreen, 1998). Few issues are more controversial in international economics than the choice of the exchange rate regime. Ever since the demise of the Bretton Woods system, economists have disagreed over the relative merits of fixed and flexible exchange rates. In the profession and among laymen, the consensus shifted from the “naive” enthusiasm for flexible exchange rates in the late sixties, to the preference for fixed rates in the early eighties and for intermediate regimes in the early nineties. After the Asian crisis the consensus changed again embracing the bipolar view of exchange rate regimes,1 i.e. either irrevocably fixed rates (currency board, dollarization) or truly flexible rates. The empirical evidence presented in the seminal contribution of Calvo and Reinhart (2002) challenged this view, suggesting that many countries follow de facto a regime which is different from what officially declared. On the one hand, pegs are often announced but not implemented in practice. On the other hand, several countries seem to “fear of floating” adopting de facto a peg (or a regime close to it) while officially declaring a float.2 The empirical distinction between de jure and de facto regimes raises a number of interesting questions. Which factors may induce the choice of a de facto peg? Why do countries enforce a peg but do not announce it? Why do countries “break their promises”? Is there a difference between countries that renege on a peg and those that “fear of floating”? In our opinion, an answer to these questions is to be found by looking at the double-edged incentives behind the adoption of an exchange rate regime. Models in the Barro–Gordon (1983) tradition, that we label as credibility view, point to the signalling content of the regime choice: governments that suffer from a credibility deficit can signal their commitment to “tough” policies by appropriately choosing the exchange rate regime. However, these strategies may backfire if the underlying fundamentals do not support the regime choice. For instance, resisting a devaluation under adverse economic circumstances may raise the incentives to devalue in the future, harming the credibility of the peg and hence triggering speculative attacks ( Bartolini and Drazen, 1997, Drazen, 1997 and Drazen and Masson, 1994). As shown in Velasco and Neut (2004), tough policies may indeed raise inflation expectations. In contrast to the credibility view, the consistency view therefore maintains that governments should pick the regime that best fits with the underlying economic and political fundamentals. In other words, the consistency view calls for retaining the option of flexibility when the potential inflation bias is stronger. In this paper, we estimate an empirical model of exchange rate regime choice. We use a general baseline specification and then note that the two views yield different predictions on some of the political and economic variables included in this specification. Thus, estimated coefficients on these variables will allow us to disentangle between consistency and credibility. Our work provides several contributions to the existing literature. First, we go beyond the standard de jure and de facto dichotomy and analyse a taxonomy of regimes (de jure-non-de facto pegs, de facto-non-de jure pegs, de facto-de jure pegs, fear of floating, etc.). This allows us to identify the determinants of specific regime choices and the value of breaking certain “promises”. Second, the focus on the credibility-vs-consistency dilemma leads us to study three channels that link politics to the choice of the exchange rate regime: (i) the electoral cycle, (ii) government termination and socio-political unrest, (iii) institutional arrangements concerning the decision-making process. Other contributions focused on broad dimensions such as the level of democracy (Leblang, 1999), the transparency of the political process (Broz, 2002), the quality of institutions and governance indicators (Alesina and Wagner, 2006). We analyse factors which are more closely related to the macroeconomic policy stance and to the choice of the exchange rate regime. To our knowledge, ours is the first systematic and comprehensive assessment of the role played by political variables in exchange rate regime choice.3 Third we extend our analysis on the credibility-vs-consistency dilemma by performing a duration analysis on the survival of de facto pegs. Fourth, we generalise, integrate and expand existing results by estimating a rich model specification on a large (96 countries) data set of developing and advanced economies spanning from 1974 to 2000. Our results support the consistency view. Indicators of socio-political risk and political fragmentation are positively related to the chances of observing a de facto float. Moreover, whenever a country is already de facto implementing a peg, the same factors make it less likely that the peg will also be announced. The same result holds for indicators of financial fragility; for instance countries heavily indebted in foreign currency are more likely to de facto peg and less likely to publicly announce it. In line with the predictions of the consistency view, we find that socio-political unrest and political fragmentation increase the chances that a promise to implement a peg will be broken. Finally, duration analysis of de facto pegs broadly confirms our previous results. The remainder of the paper is organised as follows. Section 2 discusses the channels underlying the two views. Section 3 describes the data set and the econometric methodology employed. Section 4 summarises the empirical results. Finally, Section 5 concludes.

We have shown that the exchange rate regime is chosen consistently with a set of underlying economic and socio-political conditions. In particular socio-political variables explain not only the regime choice, but also why some regimes are announced and why they are subsequently sustained or reneged upon. This should not come as a surprise: political economy models have taught us that government's preferences and political incentives are crucial in shaping macroeconomic policies. The empirical evidence presented in this paper challenges the standard view that sees the exchange rate as a commitment device. In choosing the exchange rate regime, policymakers seem to be concerned with its future sustainability. This is a wise approach as adverse economic and socio-political fundamentals raise the chances that regime choices will be reversed.