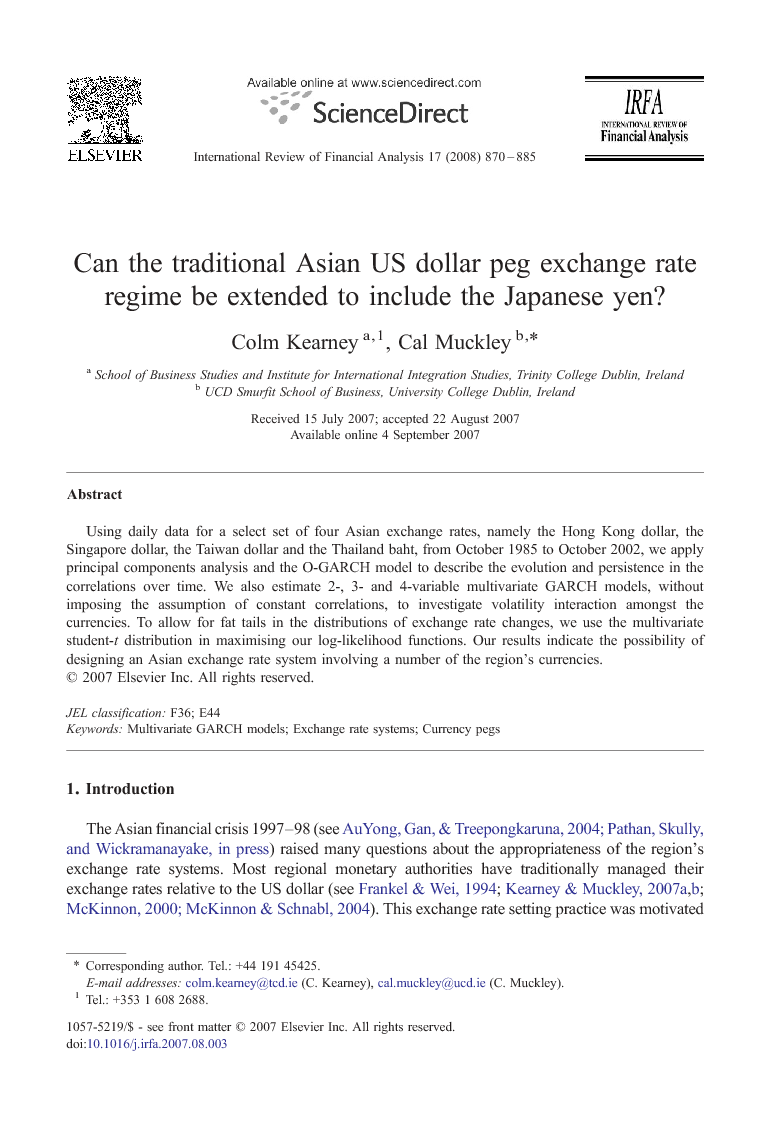 Using daily data for a select set of four Asian exchange rates, namely the Hong Kong dollar, the Singapore dollar, the Taiwan dollar and the Thailand baht, from October 1985 to October 2002, we apply principal components analysis and the O-GARCH model to describe the evolution and persistence in the correlations over time. We also estimate 2-, 3- and 4-variable multivariate GARCH models, without imposing the assumption of constant correlations, to investigate volatility interaction amongst the currencies. To allow for fat tails in the distributions of exchange rate changes, we use the multivariate student-t distribution in maximising our log-likelihood functions. Our results indicate the possibility of designing an Asian exchange rate system involving a number of the region's currencies.

An extension of the traditional North and Southeast Asian exchange rate regime, i.e., an exclusive US dollar peg, to a common currency basket including the Japanese yen, is motivated by the emerging intra-regional and international nature of regional investment and trade linkages. These emerging linkages underscore the deficiencies of the traditional US dollar peg exchange rate regime and exacerbate the corresponding intrinsic susceptibility of that regime to financial crises. In the light of this motivation, this article has specified three simple and intuitive statistical pre-conditions for the successful extension of the traditional exchange rate regime to include the Japanese yen. These pre-conditions relate to the stability, multivariate correlations and volatility of yen exchange rate returns. Overall, the evidence gathered is consistent with the contention that the Hong Kong dollar, the Singapore dollar, the Taiwan dollar and the Thailand baht comprise an eligible nucleus to a more co-ordinated regional exchange rate arrangement, based on the extension of the traditional US dollar peg, to a basket of currencies including both the Japanese yen and the US dollar. Specifically, this article examined nine North and Southeast Asian currencies, observed at a daily frequency, over the period 1st October 1985 through 1st October 2002. The unconditional statistical properties motivated the adoption of the multivariate student t distribution in our volatility modelling and the aforementioned set of yen rates was identified as exhibiting the greatest degree of stability. This evidence concerns the first statistical pre-condition. This article then adopted a principal components framework alongside the orthogonal GARCH model and found that the same set of currencies exhibits the highest degree of multivariate correlation, of all sets of that size. The correlations were demonstrated to be markedly time varying, however, it was established that there was also a high degree of persistence in the level of correlation in this set of currencies. The persistent co-movements lend considerable support to the prospect of managing these currencies as a homogeneous set relative to the Japanese yen as well as the US dollar. This constitutes evidence that the selected set of currencies satisfies, to a convincing extent, the second pre-condition. Finally, the article calibrated the degree of volatility transmission in the set of currencies using a suite of 2- 3- and 4-variable, BEKK specified, t-distributed multivariate GARCH models. This multi-model approach, in conjunction with a carefully implemented estimation procedure, yields results that are relatively robust to idiosyncracies in the likelihood space. Evidence consistent with common factors determining volatility was revealed. This evidence pertains to the third statistical pre-condition. As the three statistical pre-conditions are approximately satisfied it is apparent that, from a time series perspective, these bilateral yen rates might act as the nucleus of a more integrative exchange rate arrangement in North and Southeast Asia.