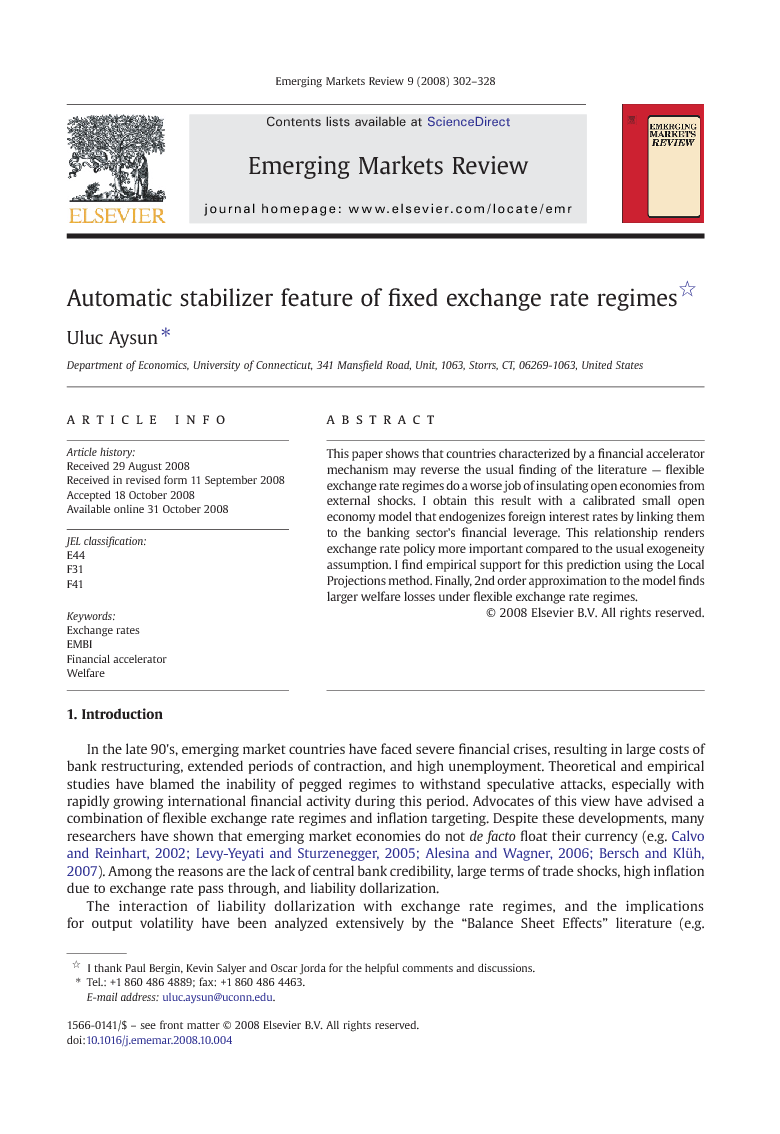 This paper shows that countries characterized by a financial accelerator mechanism may reverse the usual finding of the literature — flexible exchange rate regimes do a worse job of insulating open economies from external shocks. I obtain this result with a calibrated small open economy model that endogenizes foreign interest rates by linking them to the banking sector's financial leverage. This relationship renders exchange rate policy more important compared to the usual exogeneity assumption. I find empirical support for this prediction using the Local Projections method. Finally, 2nd order approximation to the model finds larger welfare losses under flexible exchange rate regimes.

Recent empirical and theoretical literature on emerging markets has favored flexible exchange rate regimes considering the vulnerability of fixed regimes to speculative attacks. Despite this fact, countries have been observed to control their exchange rate fluctuations. This paper has shown one reason for this so-called “Fear of Floating” or “Hidden Pegs” as it links the banking system's balance sheets to the country risk premium. The paper finds that in the absence of a financial crisis, exchange rate regimes that limit the effect of external and technology shocks on balance sheets perform better in terms of limiting output volatility when the economy is unable to borrow in terms of its own currency. It is important to note, however that the results of the paper do not necessarily favor fixed exchange rate regimes, but rather should be seen as a case against perfectly flexible exchange rate regimes in a majority of emerging market countries. The analysis suggests that countries with shallow financial markets that have significant foreign exchange exposure should limit exchange rate fluctuations until their markets are developed enough to sustain a flexible regime. In this respect, it would be interesting to investigate how exchange rate regimes interact with the level of financial development to determine the vulnerability of these economies to external and domestic shocks.