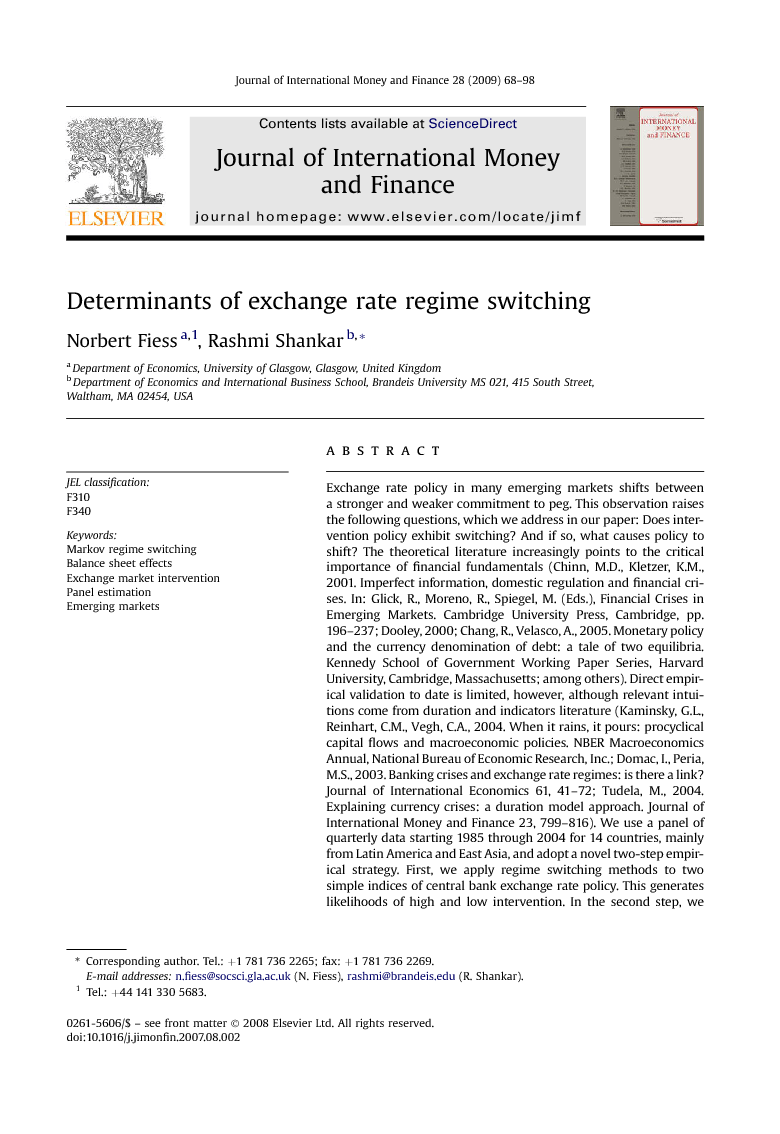 Exchange rate policy in many emerging markets shifts between a stronger and weaker commitment to peg. This observation raises the following questions, which we address in our paper: Does intervention policy exhibit switching? And if so, what causes policy to shift? The theoretical literature increasingly points to the critical importance of financial fundamentals (Chinn, M.D., Kletzer, K.M., 2001. Imperfect information, domestic regulation and financial crises. In: Glick, R., Moreno, R., Spiegel, M. (Eds.), Financial Crises in Emerging Markets. Cambridge University Press, Cambridge, pp. 196–237; Dooley, 2000; Chang, R., Velasco, A., 2005. Monetary policy and the currency denomination of debt: a tale of two equilibria. Kennedy School of Government Working Paper Series, Harvard University, Cambridge, Massachusetts; among others). Direct empirical validation to date is limited, however, although relevant intuitions come from duration and indicators literature (Kaminsky, G.L., Reinhart, C.M., Vegh, C.A., 2004. When it rains, it pours: procyclical capital flows and macroeconomic policies. NBER Macroeconomics Annual, National Bureau of Economic Research, Inc.; Domac, I., Peria, M.S., 2003. Banking crises and exchange rate regimes: is there a link? Journal of International Economics 61, 41–72; Tudela, M., 2004. Explaining currency crises: a duration model approach. Journal of International Money and Finance 23, 799–816). We use a panel of quarterly data starting 1985 through 2004 for 14 countries, mainly from Latin America and East Asia, and adopt a novel two-step empirical strategy. First, we apply regime switching methods to two simple indices of central bank exchange rate policy. This generates likelihoods of high and low intervention. In the second step, we establish the variables that determine these probabilities. We find strong evidence that the economy's balance sheet and economic performance determine the likelihood of switching in the exchange rate regime. Specifically, an increase in reserve currency debt relative to assets raises potential capital losses from devaluation and reduces the probability of switching to a low intervention regime, as does a decline in growth. The purpose here is not to present an alternative regime classification (Levy-Yeyati, E., Sturzenegger, S., 2005. Classifying exchange rate regimes: deeds vs. words. European Economic Review 49, 1603–1635; Reinhart, C.M., Rogoff, K., 2004. The modern history of exchange rate arrangements: a reinterpretation. Quarterly Journal of Economics, Available at: http://www.puaf.umd.edu/faculty/papers/reinhart/papers.htm), but to establish the relative importance of different constraints on the central bank, which has policy implications. The empirical approach and specification is flexible to whether intervention is discrete or gradual and to whether or not the central bank sterilizes

This paper is a step forward in the empirical validation of the theoretical literature that models the interaction between the economy's balance sheet and the sustainability of the exchange rate regime. Our results are consistent with the insights provided by the duration and indicators literature. We adopt a novel empirical strategy in order to shed light on the key constraints on the central bank's exchange rate policy. First, we model two standard measures as independent Markov processes. This enables us to identify well-defined switching behavior between states of high and low intervention. Next, we condition the likelihood of the regime switch on a wide range of macroeconomic while controlling for country fixed effects. The empirical approach and specification is flexible to whether intervention is discrete or gradual and to whether or not the central bank sterilizes. We find strong support for the thesis that financial responsibility determines the sustainable level of intervention across our sample of 15 countries. This was found to be true not only around points of crisis. Boom-bust cycles less dramatic than those observed during crises are observed on a regular basis for most of the countries in our sample, as evident from the graphs displayed in Section 2 and in Appendix 2. Our primary focus is to predict the likelihood of a change in the central bank's policy choice conditional on rising external debt and contingent liabilities. We find that higher reserve currency debt constrains the central bank's intervention policy in at least two different, opposite ways. For one, given limited reserves and unreliable capital inflows, the burden of intervention is more difficult to sustain as the central bank's uncovered contingent liabilities rise. This raises the costs of a peg and generates an incentive to cease intervention. At the same time, devaluation implies capital losses on external debt and generates “fear of floating” (Calvo and Reinhart, 2002). This raises the benefits of a peg and provides an incentive to cling to intervention. Our econometric results indicate that the fear of floating effect dominates: the likelihood of moving from high to low intervention is significant and decreasing in the ratio of external liabilities to assets. However, as the threshold analysis in Section 3 indicates, there is a large increase in the ratio of external liabilities to assets in the pre-floating period. High reserve currency debt does therefore reduce the central bank's willingness and ability to intervene in currency markets. This constraint on the policy maker is tighter when capital inflows are dwindling, or in a sudden stop situation, or when US interest rates are increasing. Interestingly enough, for most variables we found no significant difference in performance across fixed and floating regimes that are sustained (turning points are one-year windows at both ends of the regime); though as expected, inflation and stock market volatility are significantly higher under floating relative to fixed. The higher macroeconomic volatility under floating creates the desire to stabilize, which is typically the rationale for adopting the high intervention regime. Our results are robust across the two policy response indices and changes in specification. We identify the following country-specific constraints, which appear to drive policy regimes in a systematic way: High inflation and the desire to gain access to international capital markets create the incentive to fix. Worsening debt, increasing contingent liabilities, rising stock market volatility, and declining rates of growth determine the likelihood of switching away from the fixed regime. In validating the constraints on central bankers and decision-makers in emerging markets, we find strong support for policy recommendations that focus on improved debt management and development of domestic capital markets (Goldstein and Turner, 2004).