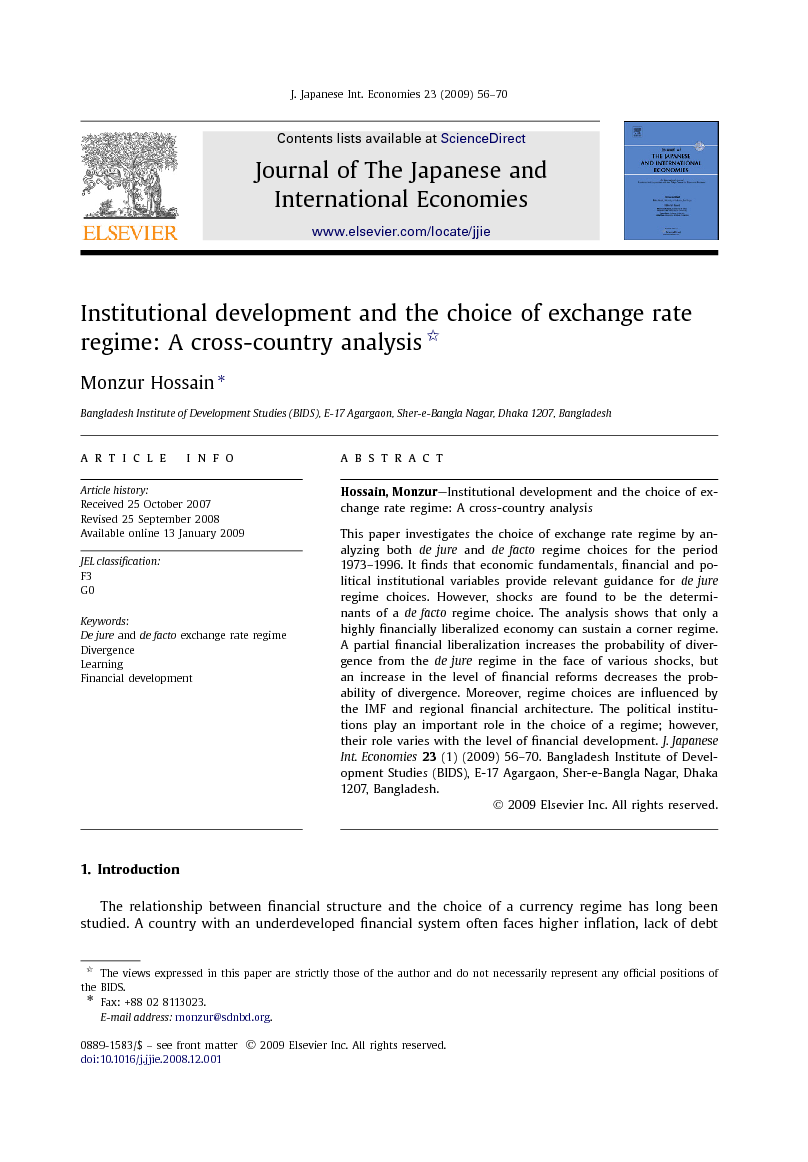 This paper investigates the choice of exchange rate regime by analyzing both de jure and de facto regime choices for the period 1973–1996. It finds that economic fundamentals, financial and political institutional variables provide relevant guidance for de jure regime choices. However, shocks are found to be the determinants of a de facto regime choice. The analysis shows that only a highly financially liberalized economy can sustain a corner regime. A partial financial liberalization increases the probability of divergence from the de jure regime in the face of various shocks, but an increase in the level of financial reforms decreases the probability of divergence. Moreover, regime choices are influenced by the IMF and regional financial architecture. The political institutions play an important role in the choice of a regime; however, their role varies with the level of financial development. J. Japanese Int. Economies23 (1) (2009) 56–70.

This study provides a comprehensive analysis on the choice of an exchange rate regime. The empirical results indicate that economic fundamentals, political and financial institutional variables provide relevant guidance to the de jure regime choice. Although the literature of the 1980s identified an important role of shocks on the choice of a (de jure) currency regime, this study specifies that shocks are the determinant of a de facto regime choice. The analysis finds that countries with weak financial institutions often diverge from the de jure fixed (intermediate) or floating regime in the face of various shocks. But countries work toward increasing the level of financial development (liberalization) during the period of divergence as it is found that an increase in the level of financial liberalization decreases the probability of divergence. And in this way countries taper off the risks of the initially chosen de jure regime. Hence, the period of divergence can be viewed as the “period of learning” as to how to increase the sustainability of the de jure regime, in other words, how to reduce the risks associated with the de jure fixed or floating regime. It is found that financial liberalization increases the probability of banking crisis in intermediate regimes but decreases the probability of banking crisis in floating regime. From the analysis, financial liberalization seems crucial for the choice of a floating regime. Moreover, it is seen that political institutional variables behave differently at different financial environments, indicating that the role of the financial institutions is important for the choice of an exchange rate regime. This study identifies a significant role of the IMF programs on the choice of a floating regime. However, IMF programs are also found significant to the divergence from both intermediate and floating regime, indicating a failure of IMF's stabilization programs in these two regimes. Such a failure lead countries diverge from their official regime and they do not declare the divergence officially perhaps from the “fear of the IMF”, that is, the fear that they will loose financial assistance from the IMF. These findings call for a careful reappraisal of the exchange-rate based stabilization programs from the part of the IMF. Moreover, it is evident from the analysis that regime choices are also influenced by the regional financial architecture. This study considers financial liberalization as a proxy for financial development. Although financial liberalization ensures more efficient allocation of capital and higher levels of savings and investment, the relationship between financial liberalization and financial development still remains ambiguous. For example, financial liberalization is not always ensuring equity market development unless a certain level of legal attainment achieved. On the other hand, an increased banking sector competition, following financial liberalization, will not necessarily induce efficient financial intermediation. Increased competition is likely to erode franchise values, which may, in turn, generate a fragile banking system where speculative behavior on the part of the banks is more likely. Increased competition can also discourage relationship-banking, which is sometimes deemed as efficient mode of contracting in a dynamic setting characterized by asymmetric information. We have ignored such feedback channels in our model. It would be useful to distinguish between various types of liberalization and reform in line with the existence of an appropriate institutional and regulatory framework designed to effectively curb imprudent bank behavior. Combining some of the above elements with our analysis may help elucidate the impact of financial development on the choice of a currency regime more appropriately. However, our understanding on financial development is still limited and much further work should be done.