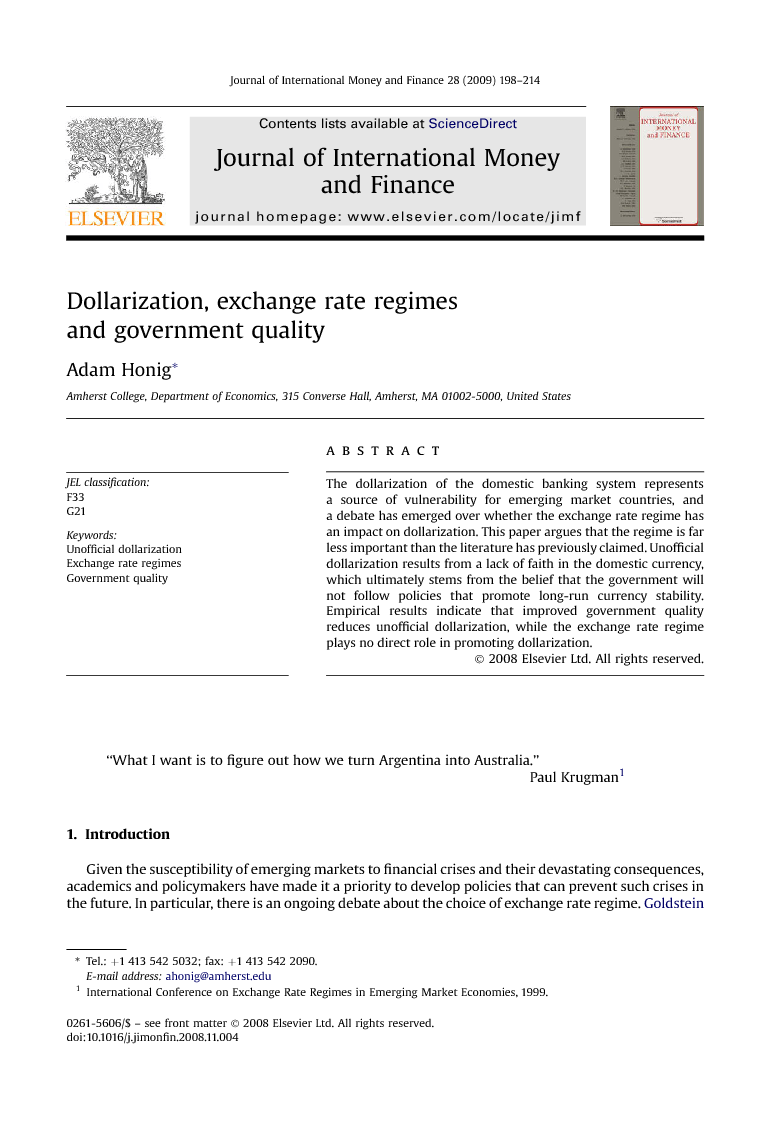 The dollarization of the domestic banking system represents a source of vulnerability for emerging market countries, and a debate has emerged over whether the exchange rate regime has an impact on dollarization. This paper argues that the regime is far less important than the literature has previously claimed. Unofficial dollarization results from a lack of faith in the domestic currency, which ultimately stems from the belief that the government will not follow policies that promote long-run currency stability. Empirical results indicate that improved government quality reduces unofficial dollarization, while the exchange rate regime plays no direct role in promoting dollarization.

Given the susceptibility of emerging markets to financial crises and their devastating consequences, academics and policymakers have made it a priority to develop policies that can prevent such crises in the future. In particular, there is an ongoing debate about the choice of exchange rate regime. Goldstein (1999), for example, has blamed fixed exchange rates for recent financial meltdowns and recommends floating, while others have suggested pegging or even official dollarization as the best path towards stability (Calvo, 1999 and Hausmann et al., 1999). For developed economies, the choice of exchange rate regime should still be analyzed in the context of the traditional optimum currency area literature (Mundell, 1961 and McKinnon, 1963). Unfortunately, this decision is more complicated for emerging markets and developing nations, which face a host of additional concerns. A serious concern that has received much recent attention, although little empirical treatment, is the liability dollarization of the domestic banking system.2 Unhedged foreign-currency-denominated liabilities are a major source of vulnerability for both firms and banks because large depreciations can lead to significant reductions in net worth (De Nicoló et al., 2005 and Mishkin, 1996). This process can lead to sharp contractions in output, producing a “fear of floating” among emerging markets (Calvo and Reinhart, 2002). It is, therefore, possible that a country that is unable to reduce this risk might choose to peg or officially dollarize even though it would otherwise prefer to float. Clearly, this is a suboptimal outcome. Not surprisingly, economists have begun to analyze the causes of unhedged dollar liabilities, and a debate has emerged over the role played by the exchange rate regime. The moral hazard view stresses that fixed exchange rates discourage hedging of dollar debt (Goldstein, 1999, Burnside et al., 2001 and Mishkin, 1999) because banks and firms believe that the peg protects them from exchange rate risk. On the other hand, exchange rate volatility increases the cost of hedging and so floating regimes may increase the amount of unhedged dollar debt (Eichengreen and Hausmann, 1999). Unfortunately, detailed data on forward contracts necessary to determine the extent to which dollar liabilities are hedged are unavailable. However, the total amount of dollar liabilities should at least be indicative of the total amount of unhedged dollar liabilities for two reasons. First, not all forward contracts eliminate foreign exchange risk. If a forward contract is made with other domestic banks or firms who earn revenue in pesos, the country's aggregate net foreign exposure remains unchanged. It is unclear whether domestic redistribution of this risk is stabilizing (Eichengreen and Hausmann, 1999). Second, as Eichengreen and Hausmann (1999) point out, foreigners are usually unwilling to sell dollars forward in exchange for domestic currency, thereby limiting hedging opportunities. Therefore, the debate over the effect of the exchange rate regime on unhedged dollar liabilities boils down to the effect of the regime on the total amount of dollar liabilities. This debate over the causes of liability dollarization requires empirical resolution and motivates the analysis of this paper. This paper estimates the effect of the exchange rate regime on a country's exposure to foreign exchange risk by determining the effect of the regime on unofficial dollarization of the domestic banking system. Thus I focus on the domestic component of “Original Sin,” that is, the inability to borrow locally in local currency, which has received less attention in the literature. The determinants of domestic dollarization are likely to be different than that of external liability dollarization. For example, a history of high inflation is likely to result in domestic dollarization, but would probably not predict a country's external debt (Reinhart et al., 2003). Finally, as this paper argues, domestic dollarization may be reversible, as opposed to external liability dollarization that exists irrespective of country heterogeneity because of the “Original Sin” of emerging markets (Eichengreen et al., 2002). The empirical evidence indicates that the exchange rate regime does not significantly affect domestic dollarization. Instead, unofficial dollarization results from a lack of confidence in the currency, which ultimately stems from the belief that the government will not follow policies that promote long-run currency stability.3 A fixed exchange rate does not ensure this stability, and the choice of exchange rate regime is not an easy fix. Using indicators of government quality, I demonstrate empirically that government quality is the key driver of domestic dollarization.4 Therefore, improvements in institutions are a requirement for reducing emerging market vulnerability to large depreciations.5 I also find that government quality has an effect after controlling for inflation and periods of past high inflation, thought to be key determinants of dollarization. This suggests that government quality has a residual effect on dollarization, above and beyond its effect on dollarization through inflation. Throughout the 1990s, unofficial dollarization progressed steadily despite falling inflation and attempts to limit exchange rate movements. One explanation is a continued lack of faith in underlying government fundamentals, even if policy has been successful in reducing inflation. Specifically, the persistent trend towards dollarization might reflect an approval of current policies but a fear that they may someday be reversed or abandoned. The rest of the paper is organized as follows. Section 2 presents the empirical methodology. Section 3 discusses the results of the estimation. Section 4 summarizes the findings and draws policy implications.

The empirical results in this paper suggest that the exchange rate regime is not an important determinant of unofficial dollarization. The implication is that too much emphasis has been placed on the role that the exchange rate can play in either reducing or exacerbating emerging market vulnerability. Instead, more attention should be paid to the root cause of unofficial dollarization – a lack of faith in the government's ability to enact policies that promote long-run currency stability. This paper demonstrates empirically that improving the institutions of government can lead to a reduction in the degree of dollarization. Thus, although countries cannot erase a history of high inflation, there is still reason for optimism that they can reverse the domestic dollarization process by building a reputation for sound policy and good governance. In other words, emerging markets can achieve redemption from “Original Sin” in the domestic sense. No particular exchange rate regime will accomplish this but rather, as Calvo and Mishkin (2003) put it, “it's the institutions stupid.” The second implication is that unofficial dollarization should not always be treated as an initial condition that should frame the choice of exchange rate regime in emerging markets. For some countries, this may be appropriate (Calvo, 1999), but for many others, unofficial dollarization should be viewed as an endogenous market response to bad policy, an outcome that can and should be reversed.28 Although they may be forced in the short run to limit exchange rate movements while there are still large unhedged dollar liabilities, countries experiencing this problem should choose to fix (or even officially dollarize), as opposed to float, only if they would make the same choice without this source of currency risk. If not, they should reverse dollarization so that floating does not involve so much risk. Thus, although the results of this paper indicate that there are no easy fixes and that credibility can only be achieved the hard way, there remains the optimistic conclusion that emerging markets are not helpless in this endeavor.