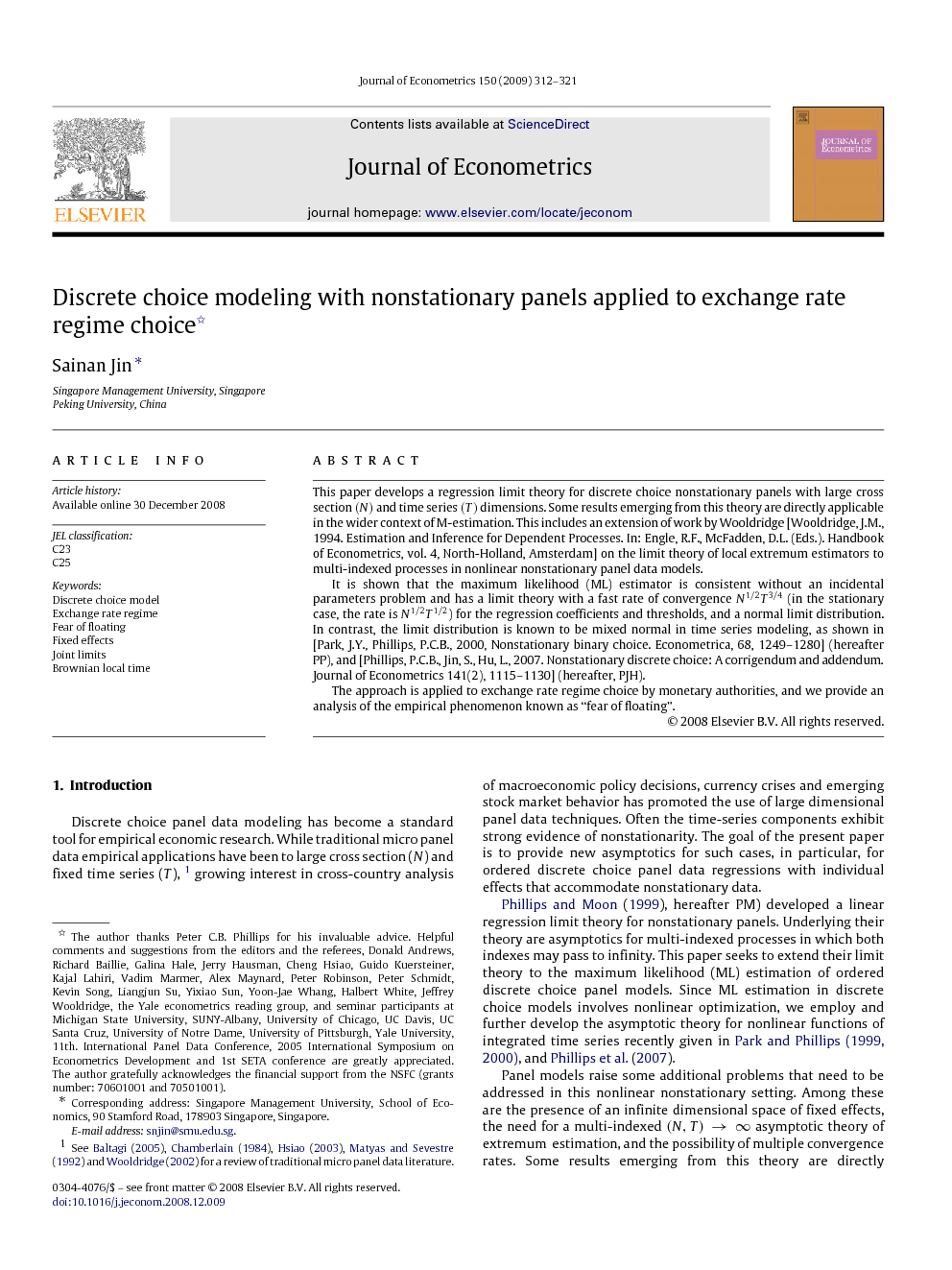 This paper develops a regression limit theory for discrete choice nonstationary panels with large cross section (N)(N) and time series (T)(T) dimensions. Some results emerging from this theory are directly applicable in the wider context of M-estimation. This includes an extension of work by Wooldridge [Wooldridge, J.M., 1994. Estimation and Inference for Dependent Processes. In: Engle, R.F., McFadden, D.L. (Eds.). Handbook of Econometrics, vol. 4, North-Holland, Amsterdam] on the limit theory of local extremum estimators to multi-indexed processes in nonlinear nonstationary panel data models. It is shown that the maximum likelihood (ML) estimator is consistent without an incidental parameters problem and has a limit theory with a fast rate of convergence N1/2T3/4N1/2T3/4 (in the stationary case, the rate is N1/2T1/2N1/2T1/2) for the regression coefficients and thresholds, and a normal limit distribution. In contrast, the limit distribution is known to be mixed normal in time series modeling, as shown in [Park, J.Y., Phillips, P.C.B., 2000, Nonstationary binary choice. Econometrica, 68, 1249–1280] (hereafter PP), and [Phillips, P.C.B., Jin, S., Hu, L., 2007. Nonstationary discrete choice: A corrigendum and addendum. Journal of Econometrics 141(2), 1115–1130] (hereafter, PJH). The approach is applied to exchange rate regime choice by monetary authorities, and we provide an analysis of the empirical phenomenon known as “fear of floating”.

Discrete choice panel data modeling has become a standard tool for empirical economic research. While traditional micro panel data empirical applications have been to large cross section (NN) and fixed time series (TT), 1 growing interest in cross-country analysis of macroeconomic policy decisions, currency crises and emerging stock market behavior has promoted the use of large dimensional panel data techniques. Often the time-series components exhibit strong evidence of nonstationarity. The goal of the present paper is to provide new asymptotics for such cases, in particular, for ordered discrete choice panel data regressions with individual effects that accommodate nonstationary data. Phillips and Moon (1999), hereafter PM) developed a linear regression limit theory for nonstationary panels. Underlying their theory are asymptotics for multi-indexed processes in which both indexes may pass to infinity. This paper seeks to extend their limit theory to the maximum likelihood (ML) estimation of ordered discrete choice panel models. Since ML estimation in discrete choice models involves nonlinear optimization, we employ and further develop the asymptotic theory for nonlinear functions of integrated time series recently given in Park and Phillips, 1999 and Park and Phillips, 2000, and Phillips et al. (2007). Panel models raise some additional problems that need to be addressed in this nonlinear nonstationary setting. Among these are the presence of an infinite dimensional space of fixed effects, the need for a multi-indexed (N,T)→∞(N,T)→∞ asymptotic theory of extremum estimation, and the possibility of multiple convergence rates. Some results emerging from this theory are directly applicable in the wider context of M-estimation. This includes an extension of work by Wooldridge (1994) on the limit theory of local extremum estimators to multi-indexed processes in nonlinear nonstationary panel data models. In a panel discrete choice setting, we show that ML estimation provides consistent estimates of the full set of model parameters including the regression coefficients β0β0, the thresholds μ0μ0 and the fixed effect αi0αi0. The ML estimator of the regression coefficients and thresholds has a normal limit distribution, whereas the limit distribution is known to be mixed normal in the time series case, as shown in PP and PJH. Another finding in this nonstationary setting is that fixed effects bias is removed asymptotically when N/T2→0N/T2→0, while in fixed effects nonlinear stationary panel modeling with large NN and large TT, the fixed effects bias disappears asymptotically with the rate condition N/T→0N/T→0, as shown in Hahn and Newey (2004). The new results also stand in contrast to those of the binary choice models with zero thresholds where there are dual rates of convergence for the regression coefficients: a fast rate of convergence of N1/2T3/4N1/2T3/4 in a direction that is orthogonal to that of the true coefficient vector β0β0; and a slower rate of convergence of N1/2T1/4N1/2T1/4 in other directions. This dual-rate phenomenon was discovered by PP in the time series binary choice setting. The difference in the asymptotic behavior in the present case arises from the fact that, for the ordered discrete choice case with nonstationary panels, we allow for scaled thresholds (View the MathML sourceTμ) consonant with the nonstationary nature of the data, and the signal from the regressors involves a nonlinear function of the covariates xitxit evaluated at the linear form View the MathML sourcexit′β0−Tμ0j instead of View the MathML sourcexit′β0. The latter (i.e. View the MathML sourcexit′β0) generally attenuates the signal from xitxit in the direction β0β0 because large deviations of View the MathML sourcexit′β0 enter as arguments of a density function which downweights large deviations, so they contribute less, as was pointed out in PP. On the other hand, the presence of scaled thresholds helps prevent the attenuation of the signal along β0β0 because they recenter the main contribution to the signal at a spatial point away from the origin, thereby assuring the same rate of convergence in all directions. In addition, with scaled thresholds, the asymptotics involve functionals of local time at the thresholds instead of zero. We apply our approach to model the choice of exchange rate regime by monetary authorities, and we explore the empirical phenomenon known as “fear of floating”, which occurs when countries report a floating regime but actually intervene to smooth exchange rate fluctuations. This latter phenomenon was discussed in Calvo and Reinhart (2002) and has attracted much recent attention in international finance. We show that, consistent with the existing literature, fixed regimes are preferred by countries with smaller size, weaker government, more concentration in trade, and more foreign denominated liabilities. Also, countries that undergo a rapid process of financial deepening favor a more flexible exchange rate. We further show that fear of floating is positively associated with foreign denominated liabilities, and monetary shocks, among other variables. The remainder of the paper is organized as follows. Section 2 outlines the discrete choice panel model with individual effects and assumptions. Section 3 gives the main results on the limit theory of the ML estimator. Section 4 presents an application to exchange rate regime choice. Section 5 concludes. Some useful lemmas and proofs of the main theorems are given in the Appendix of Jin (2009). Notation is given in the left column of this page.

Discrete choice models for panel data have proved to be a powerful tool in microeconometric analysis. The development of econometric theory that accommodates nonstationarity in nonlinear settings such as discrete choice opens up a range of potential applications in macroeconomics, finance, and international finance. The present paper seeks to provide such a theory for discrete choice panel regressions with individual effects that allow for nonstationary data. In particular, we provide a joint limit theory for the maximum likelihood estimation of such systems. The ML estimator is shown to be consistent and asymptotically normal without an incidental parameter problem and with faster rates of convergence for the regression coefficients and thresholds than in the stationary case. Our approach is applied to modeling the choice of exchange rate regime by monetary authorities, and we provide an analysis of the phenomenon known as fear of floating. We show that countries with smaller size, weaker government, more concentration in trade, and more foreign denominated liabilities are more likely to peg. Also, countries that undergo a rapid process of financial deepening would like to adopt a more flexible exchange rate, consistent with the argument of impossible trinity. We further show that, consistent with the existing literature, fear of floating is associated with balance sheet effects, inflation targeting, and monetary shocks. Hann and Kuersteiner (2004) showed that as N/T→0N/T→0 the fixed effects bias is removed asymptotically for dynamic nonlinear panel models with fixed effects. Of course, a different proof strategy is possible for nonstationary cases. Extensions along this line will be left for future research.