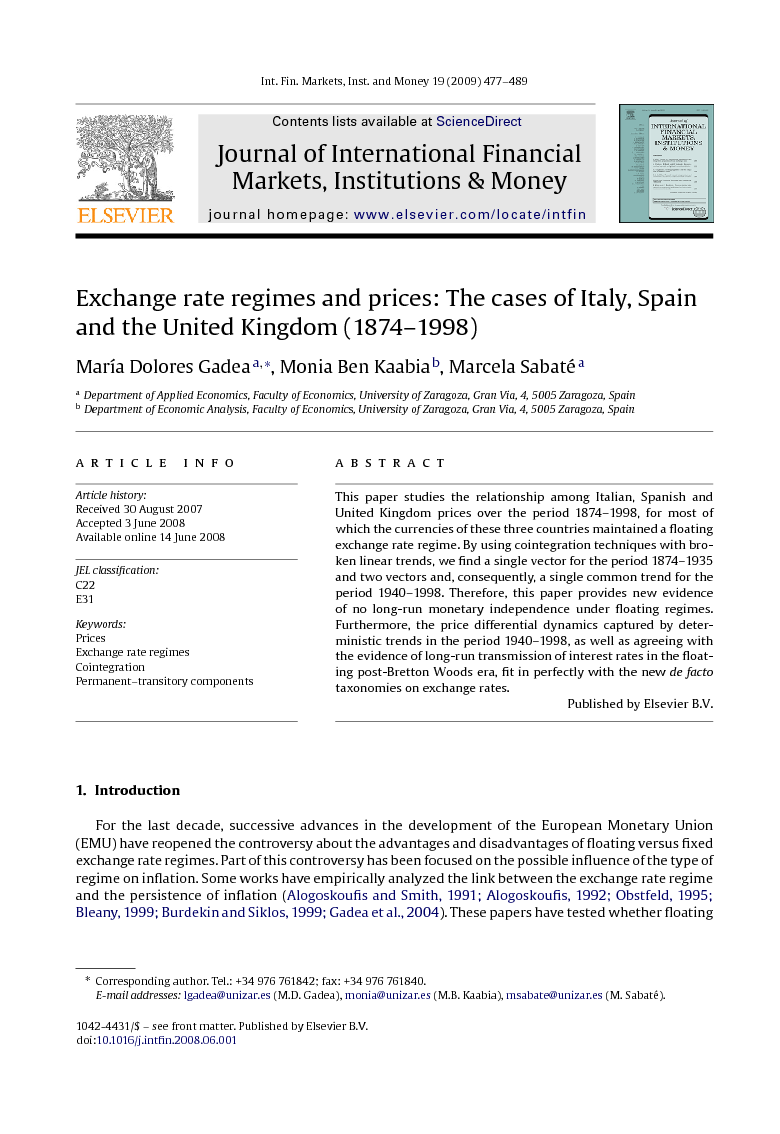 This paper studies the relationship among Italian, Spanish and United Kingdom prices over the period 1874–1998, for most of which the currencies of these three countries maintained a floating exchange rate regime. By using cointegration techniques with broken linear trends, we find a single vector for the period 1874–1935 and two vectors and, consequently, a single common trend for the period 1940–1998. Therefore, this paper provides new evidence of no long-run monetary independence under floating regimes. Furthermore, the price differential dynamics captured by deterministic trends in the period 1940–1998, as well as agreeing with the evidence of long-run transmission of interest rates in the floating post-Bretton Woods era, fit in perfectly with the new de facto taxonomies on exchange rates

The aim of this paper has been to analyze the long-run behavior of Italian, Spanish and UK prices between 1874 and 1998 since, for most of this period, their respective currencies have worked under floating exchange rate regimes. For the period 1874–1935, we found a single stable cointegration relationship among the three prices and, therefore, two permanent components which, in turn, differentiate the UK case from the Mediterranean experience. Furthermore, with UK prices representing the orthodoxy of monetary control in central gold standard countries, their leadership over Mediterranean prices illustrates how these peripheral countries, although formally outside the metallic standard (Italy intermittently, Spain permanently), did not remain monetarily isolated. In other words, the finding of cointegration supports the idea of Bordo and Rockoff (1996) about the de facto shadowing of the gold stability rules by the Italian and Spanish authorities. For the period 1940–1998, we found the existence of two cointegrating vectors and, as a consequence, a single common trend that was identified with the UK prices. In this respect, our results support those of others who offer evidence of no monetary isolation for the G7 countries in the second half of the last century, despite the float that began with the breakdown of Bretton Woods. Moreover, the different price dynamic that the trend coefficients estimated in this paper assign to the 1948–1974 and 1975–1998 sub-periods is in accordance with the new taxonomy of exchange rate regimes established in Reinhart and Rogoff (2004). By using the market exchange rates (black market rates included), instead of the official rates, these authors conclude that, over the second half of the last century, the nature of the classification problem has progressively passed from labeling a regime as a peg when it did not behave as such, to labeling a regime as a float when the degree of fluctuation is, in practice, very limited. This fits perfectly with the significant price differential trends that we find for the Bretton Woods era, especially pronounced for the Spanish–UK vector, which are only understandable when related to the generalized existence of black markets in Europe (with a large premium in the case of the peseta) during the 1950s. On the contrary, the irrelevance of trends in the 1975–1998 sub-period points to a stabilization of price differentials, even if the official link among the three currencies considered here was minimal. In any case, beyond differences in the degree of coordination, the equilibrium relationship found in this paper among the Italian, Spanish and UK prices during the period 1874–1898 contributes to the empirical literature on exchange rates by increasing the evidence of the non-exercise of long-run monetary independence under floating regimes.