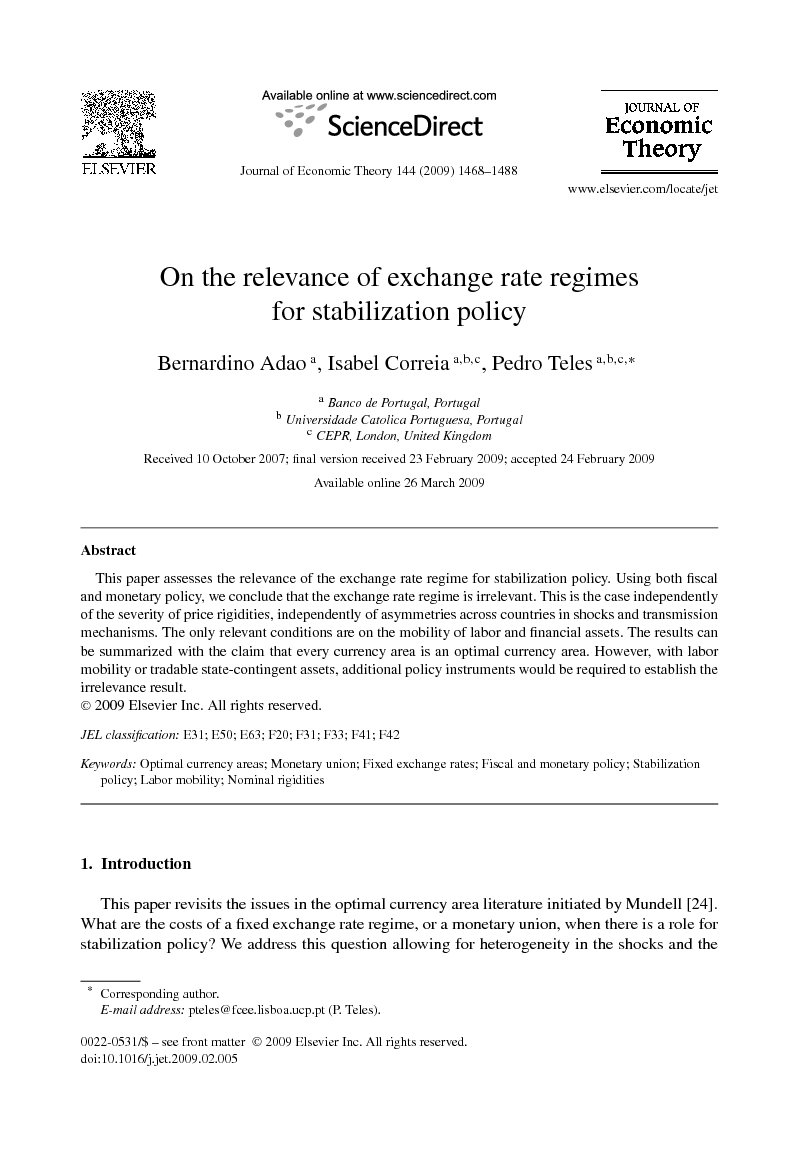 This paper assesses the relevance of the exchange rate regime for stabilization policy. Using both fiscal and monetary policy, we conclude that the exchange rate regime is irrelevant. This is the case independently of the severity of price rigidities, independently of asymmetries across countries in shocks and transmission mechanisms. The only relevant conditions are on the mobility of labor and financial assets. The results can be summarized with the claim that every currency area is an optimal currency area. However, with labor mobility or tradable state-contingent assets, additional policy instruments would be required to establish the irrelevance result.

This paper revisits the issues in the optimal currency area literature initiated by Mundell [24]. What are the costs of a fixed exchange rate regime, or a monetary union, when there is a role for stabilization policy? We address this question allowing for heterogeneity in the shocks and theresponse to them, restrictions on the mobility of factors and incompleteness of asset markets, asis standard in the optimal currency area literature. When different shocks hit different countries or when there are differences across countries in the effects of shocks, monetary policy, that has a stabilization role because of some form of nominal rigidity, may have to react differently in the different countries. Because of this heterogeneity it is common to infer that there are costs of a common monetary policy, either through a fixed exchange rate regime or a monetary union. In the literature, these costs are taken to be higher the stronger are the asymmetries, the more severe are the nominal rigidities, the more pronounced is the incompleteness of international asset markets, the less mobile is labor, and, finally, the less able is fiscal policy in effectively stabilizing the national economies (Corsetti [12]).1 We take the standard approach in the literature on optimal fiscal and monetary policy after Lucas and Stokey [23], followed by many others. There, fiscal and monetary policy are decided jointly by a Ramsey government that must raise distortionary taxes to pay for exogenous government expenditures, so that the Pareto first best solution is not achievable.2 In our second best environment, we show that the loss of the country specific monetary tool is of no cost. This is true irrespective of the asymmetry in shocks or response to these and the severity of the nominal rigidities. The elements that are crucial in assessing the costs of a single monetary policy are the three last ones in the list by Corsetti above, but labor mobility, and the completeness of international financial markets, work in opposite ways to the conventional wisdom. Fiscal and monetary policy are able to eliminate the costs of a monetary union only if labor is not mobile across countries and private state-contingent debt is not traded internationally. Unless further instruments are considered. We consider a standard two country model. Each country specializes in the production of a composite tradable good, which aggregates a continuum of goods produced using labor only. Labor is not mobile across countries.Money is used for transactions according to a cash-in-advance constraint on the purchases of the two composite goods by the households of each country. The government of each country must finance exogenous expenditures on the good produced at home with distortionary taxes and seigniorage. The tax instruments are labor income and consumption taxes. There is state-contingent private debt inside each country in zero net supply and noncontingent nominal public debt in each currency that can be traded internationally. We start by analyzing a benchmark economy where prices are flexible (Sections 2 and 3). We show that any equilibrium allocation in the flexible price, flexible exchange rates, economy can be implemented with fiscal and monetary policies that induce stable producer prices and constant exchange rates. This result has implications for economies under fixed exchange rates with nominal rigidities (Section 4). For those policies, that under flexible prices keep prices constant, if firms were restricted in the setting of prices such as in Calvo [7], those restrictions would be irrelevant and the same allocations could still be implemented. It follows that under sticky prices and fixed exchange rates it is always possible to achieve the same allocations as under flexible prices and exchange rates. Under sticky prices there are equilibrium allocations other than the ones achieved under flexible prices.We show that the common set of allocations to flexible and sticky prices dominates in welfare terms those other equilibrium allocations. The reason for this result is the one in Diamond and Mirrlees [16], that even in a second best environment it is not optimal to distort production.

In this paper we address the central issues in the literature on optimal currency areas using the approach of Ramsey optimal fiscal and monetary policy. In our set up, every currency areais an optimal currency area, provided there are restrictions on the mobility of labor and financial assets. This extreme result is in sharp contrast with the literature on optimal currency areas, and calls for the need to take into account fiscal policy when addressing those regime issues. Under a flexible exchange rate regime, monetary policy in each country can freely respond to shocks; it may respond to country specific shocks or it may respond to common shocks in different ways. Instead, in a monetary union there is a unique monetary policy for the members of the union. This implies restrictions in the use of policy; the exchange rate must be constant over time and the nominal interest rate must be equal across countries. Are these restrictions relevant to achieve the optimal equilibrium allocations? Does the answer to this question change with theintroduction of nominal rigidities, like staggered price setting? Does it matter that international capital markets are segmented, and that labor is not mobile? The conventional, Mundellian, wisdom is that there are costs of a fixed exchange rate regime, or a monetary union, resulting from the loss in ability to use policy for stabilization purposes. The costs are taken to be higher the stronger are the asymmetries across countries in shocks and their transmission, and the stronger are the nominal rigidities. Instead, we show that in an environment with nominal rigidities, whatever the type of price setting, producer currency pricing or local currency pricing, the exchange rate regime, whether flexible or fixed exchange rates, is irrelevant once fiscal policy instruments are taken into account. We also show that, in order for the costs of the monetary union to be zero, labor cannot be mobile, unless additional policy instruments were used. Similarly, there must be restrictions on the mobility of financial assets. One final comment: Friedman [20] made the point that, in a world with sticky prices, exchange rates should be flexible in order for relative prices to be adjusted.We make a further point that in a world where prices are sticky and exchange rates cannot move there are still policy instruments that can replace the role of the price level and the exchange rate. Note that the adjustments in fiscal policy are not automatic and would require a knowledge of the model and the shocks to be fully effective. But the movements in exchange rates that would be necessary to accomplish the same goal, could be market determined, but would not be automatic either. The information that is necessary to conduct policy under flexible exchange rates so that the path for exchange rates is a particular one is exactly the same information necessary to affect directly the relative prices using tax rates.