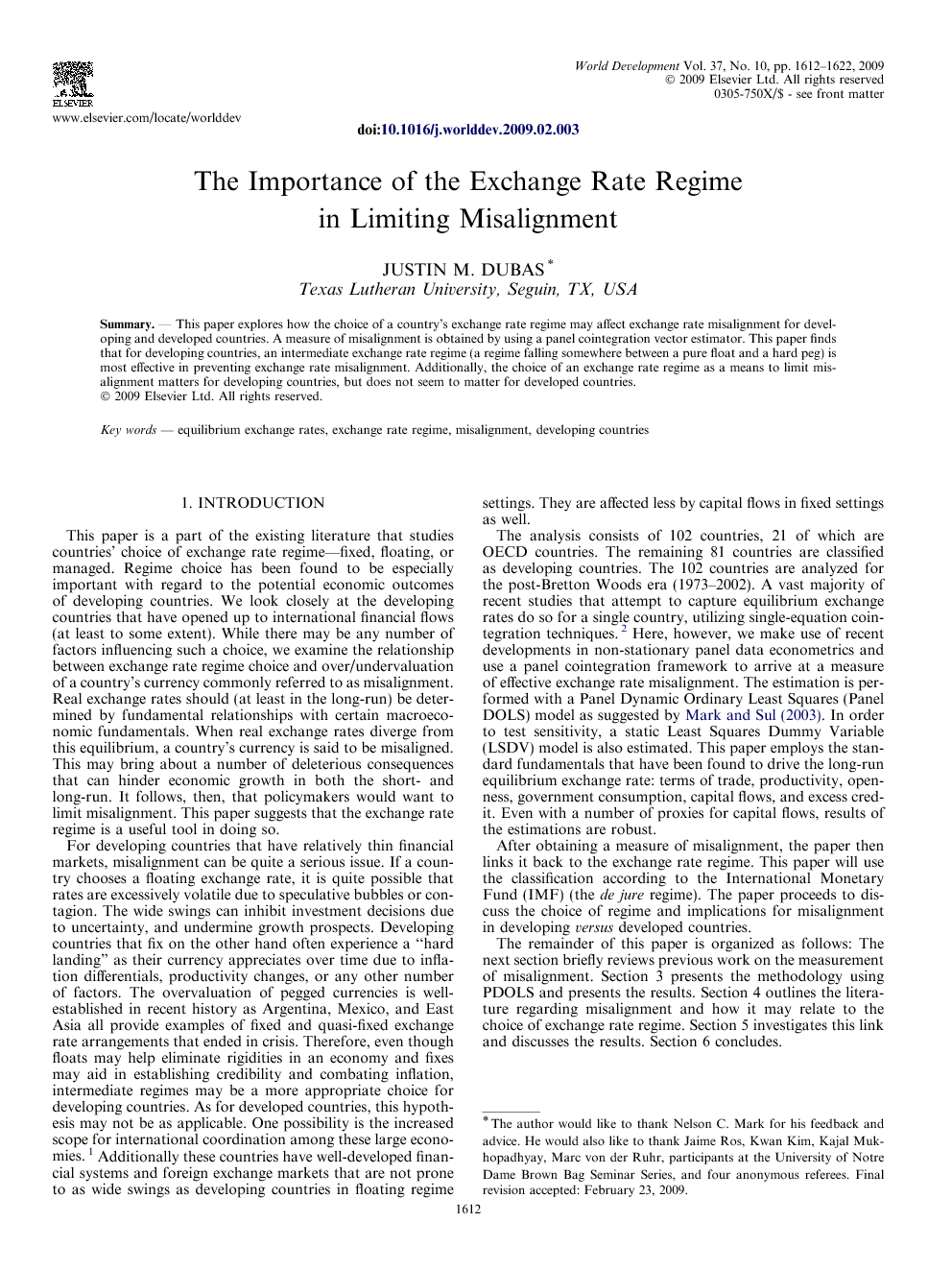 This paper is a part of the existing literature that studies countries’ choice of exchange rate regime—fixed, floating, or managed. Regime choice has been found to be especially important with regard to the potential economic outcomes of developing countries. We look closely at the developing countries that have opened up to international financial flows (at least to some extent). While there may be any number of factors influencing such a choice, we examine the relationship between exchange rate regime choice and over/undervaluation of a country’s currency commonly referred to as misalignment. Real exchange rates should (at least in the long-run) be determined by fundamental relationships with certain macroeconomic fundamentals. When real exchange rates diverge from this equilibrium, a country’s currency is said to be misaligned. This may bring about a number of deleterious consequences that can hinder economic growth in both the short- and long-run. It follows, then, that policymakers would want to limit misalignment. This paper suggests that the exchange rate regime is a useful tool in doing so. For developing countries that have relatively thin financial markets, misalignment can be quite a serious issue. If a country chooses a floating exchange rate, it is quite possible that rates are excessively volatile due to speculative bubbles or contagion. The wide swings can inhibit investment decisions due to uncertainty, and undermine growth prospects. Developing countries that fix on the other hand often experience a “hard landing” as their currency appreciates over time due to inflation differentials, productivity changes, or any other number of factors. The overvaluation of pegged currencies is well-established in recent history as Argentina, Mexico, and East Asia all provide examples of fixed and quasi-fixed exchange rate arrangements that ended in crisis. Therefore, even though floats may help eliminate rigidities in an economy and fixes may aid in establishing credibility and combating inflation, intermediate regimes may be a more appropriate choice for developing countries. As for developed countries, this hypothesis may not be as applicable. One possibility is the increased scope for international coordination among these large economies.1 Additionally these countries have well-developed financial systems and foreign exchange markets that are not prone to as wide swings as developing countries in floating regime settings. They are affected less by capital flows in fixed settings as well. The analysis consists of 102 countries, 21 of which are OECD countries. The remaining 81 countries are classified as developing countries. The 102 countries are analyzed for the post-Bretton Woods era (1973–2002). A vast majority of recent studies that attempt to capture equilibrium exchange rates do so for a single country, utilizing single-equation cointegration techniques.2 Here, however, we make use of recent developments in non-stationary panel data econometrics and use a panel cointegration framework to arrive at a measure of effective exchange rate misalignment. The estimation is performed with a Panel Dynamic Ordinary Least Squares (Panel DOLS) model as suggested by Mark and Sul (2003). In order to test sensitivity, a static Least Squares Dummy Variable (LSDV) model is also estimated. This paper employs the standard fundamentals that have been found to drive the long-run equilibrium exchange rate: terms of trade, productivity, openness, government consumption, capital flows, and excess credit. Even with a number of proxies for capital flows, results of the estimations are robust. After obtaining a measure of misalignment, the paper then links it back to the exchange rate regime. This paper will use the classification according to the International Monetary Fund (IMF) (the de jure regime). The paper proceeds to discuss the choice of regime and implications for misalignment in developing versus developed countries. The remainder of this paper is organized as follows: The next section briefly reviews previous work on the measurement of misalignment. Section 3 presents the methodology using PDOLS and presents the results. Section 4 outlines the literature regarding misalignment and how it may relate to the choice of exchange rate regime. Section 5 investigates this link and discusses the results. Section 6 concludes.