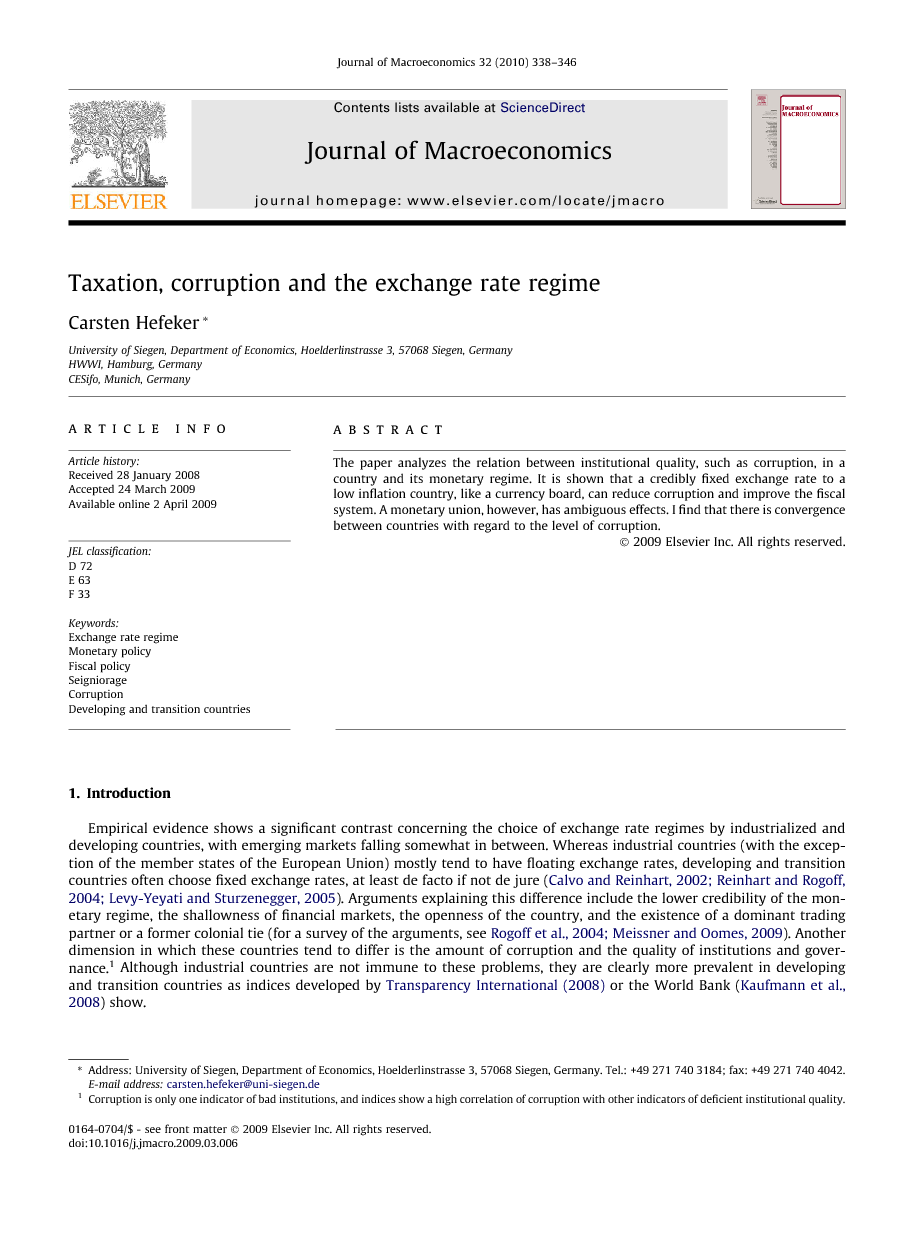 The paper analyzes the relation between institutional quality, such as corruption, in a country and its monetary regime. It is shown that a credibly fixed exchange rate to a low inflation country, like a currency board, can reduce corruption and improve the fiscal system. A monetary union, however, has ambiguous effects. I find that there is convergence between countries with regard to the level of corruption.

Empirical evidence shows a significant contrast concerning the choice of exchange rate regimes by industrialized and developing countries, with emerging markets falling somewhat in between. Whereas industrial countries (with the exception of the member states of the European Union) mostly tend to have floating exchange rates, developing and transition countries often choose fixed exchange rates, at least de facto if not de jure (Calvo and Reinhart, 2002, Reinhart and Rogoff, 2004 and Levy-Yeyati and Sturzenegger, 2005). Arguments explaining this difference include the lower credibility of the monetary regime, the shallowness of financial markets, the openness of the country, and the existence of a dominant trading partner or a former colonial tie (for a survey of the arguments, see Rogoff et al., 2004 and Meissner and Oomes, 2009). Another dimension in which these countries tend to differ is the amount of corruption and the quality of institutions and governance.1 Although industrial countries are not immune to these problems, they are clearly more prevalent in developing and transition countries as indices developed by Transparency International (2008) or the World Bank (Kaufmann et al., 2008) show. In this paper I aim to explore the connection between institutional quality, the fiscal system, and the choice of the exchange rate regime. This connection is important for countries in which monetary policy is dominated by fiscal policy and plays an important role in financing the public budget (Cukierman et al., 1992, Crowe, 2006 and Catao and Terrones, 2005), where de-facto independence of central banks is often not given (Acemoglu et al., 2008), and where corruption and rent-seeking are prevalent phenomena that go hand in hand with high rates of inflation and ambitious government spending (Al-Marhubi, 2000, Ades and Di Tella, 1999 and Blackburn et al., 2008). The model developed in this paper captures these phenomena and is hence relevant for countries in Africa, the Middle East, Central Asia or the Caucasus. Many of these countries have considerable amounts of natural resources such as oil or gas, are plagued by widespread corruption and weak institutional capacities, and highly distortive and regressive tax systems. At the same time, monetary policy institutions are not very credible and for this and other reasons, some of these countries consider forming a monetary union, such as in West Africa (Masson and Pattillo, 2005), the Gulf Region (Sturm and Siegfried, 2005), or in the former Soviet Union (Chaplygin et al., 2006).2 Alternatively, some countries have chosen (or are considering) a unilateral peg to a low inflation anchor currency or the introduction of a foreign currency as a means of payment (see Kenen and Meade, 2008 for examples). The present paper considers the options of monetary autonomy, a hard peg, or a full monetary union and discusses the implications of a move from one regime to another for institutional quality. I find that a peg to a high inflation country, or a monetary union with such a country, would lower institutional quality in the pegging country. This is because the more seigniorage revenue a country obtains, the less incentive it has to fight against corruption and looting of the budget. A unilateral peg to a low inflation country instead would force fiscal discipline on the pegging country and thus lead the government to fight harder against corruption. However, lower seigniorage also implies higher taxes and can have negative output effects. Governments thus face a trade-off between higher institutional quality with lower inflation versus higher taxes with lower output and government spending. The paper is structured as follows. Section 2 relates to the literature, while Section 3 develops a theoretical model that analyzes the relation between fiscal policy, corruption and inflation. Sections 4, 5 and 6 look at monetary independence, a tight peg, and a monetary union respectively. Section 7 concludes.

The paper has analyzed a relatively little researched dimension of institutional quality and monetary policy. While the existence of independent and conservative central banks has often been explored in comparison to external anchors for monetary policy, the influence of fiscal policy and corruption and rent-seeking is under-explored. I develop a model that explicitly considers the connection between fiscal policy and monetary policy if corruption and other leakages from fiscal revenue are important. It is shown that a tight peg to a low inflation currency can improve the institutional quality in a country. The government is induced to fight more strongly against leakages and corruption if the revenue from seigniorage is lowered. This, unfortunately, also leads to higher taxation and thus higher output distortions. Governments thus face a trade-off between higher revenue, output and spending and lower inflation and corruption when choosing their exchange rate regime. The effects of changes in taxation and corruption on government utility are thus not obvious and will depend on the relative weights a government assigns to these opposing influences. Which of the regimes is preferred by a government mainly depends on the initial level of distortions and corruption and the relative preference for reducing inflation, stabilizing output and expenditures, and fighting corruption. Concerning the stabilizing role of monetary policy it is clear that a hard peg implies the least stabilization whereas in a monetary union member countries import monetary reactions to shocks in partner countries (according to their relative weights). The loss of monetary policy implies that fiscal policy will have to assume a stronger role in stabilization which implies a higher volatility of taxes and output. This as well can be considered a disadvantage of giving up monetary autonomy. Moving to a full monetary union can lead to more or less corruption, depending mainly on the choice of partner countries for the monetary union. Countries with different levels of corruption and spending targets for fiscal policy will experience a convergence in corruption and spending. Thus, lower corruption will only result if the country joins a monetary union where is has a relatively little weight and where the other countries have relatively well developed institutions. These results, although not tested directly in this paper, are supported by the evidence in other studies. There is a strong correlation between corruption and fiscal problems, and also between inflation and corruption, thus supporting the view that seigniorage plays an important role in developing and middle income countries. It is also well established in the literature that with access to”easy” fiscal revenues governments have lower incentives to fight against corruption. Moreover, it is clear that high rates of inflation are ultimately not compatible with fixed rates. Thus, fixed rates are neither compatible with weak institutions and corruption as these imply higher inflation. These results have obvious implications for countries in a high corruption environment, such as in Africa or the CIS states. Since some of these countries are considering one or the other form of monetary integration with dominant neighbors, the results derived here suggest being careful. It might be better in some cases to (continue to) peg to currencies like the US-dollar or the euro instead of moving to a regional monetary union. These findings also cast doubt on the now nearly universal advice by international agencies like the International Monetary Fund that countries choose flexible exchange rate regimes. Such a solution may actually be accompanied by a deterioration of institutional quality which is also one of the aims of international organizations. It should be taken into consideration that these aims need not necessarily go together well.