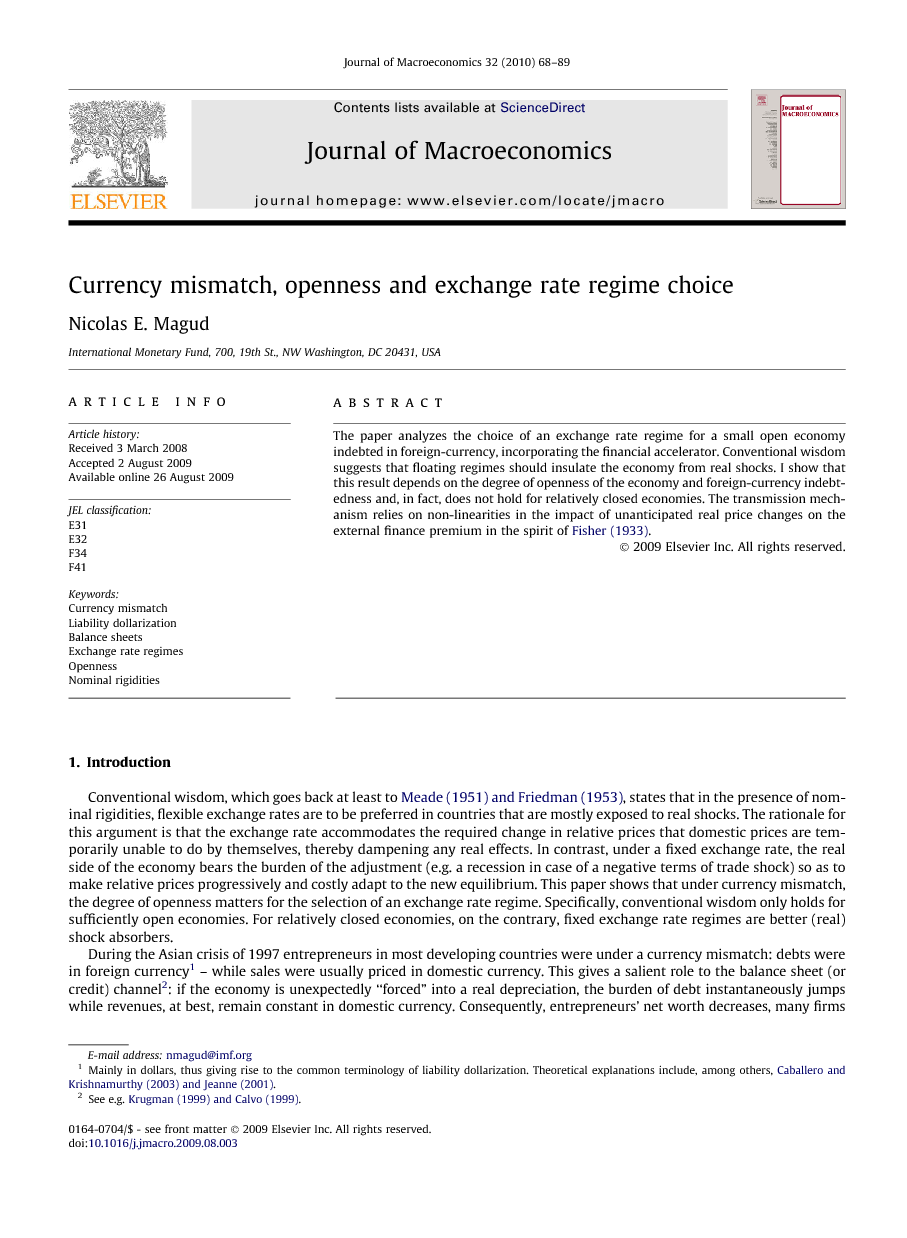 The paper analyzes the choice of an exchange rate regime for a small open economy indebted in foreign-currency, incorporating the financial accelerator. Conventional wisdom suggests that floating regimes should insulate the economy from real shocks. I show that this result depends on the degree of openness of the economy and foreign-currency indebtedness and, in fact, does not hold for relatively closed economies. The transmission mechanism relies on non-linearities in the impact of unanticipated real price changes on the external finance premium in the spirit of Fisher (1933).

Conventional wisdom, which goes back at least to Meade, 1951 and Friedman, 1953, states that in the presence of nominal rigidities, flexible exchange rates are to be preferred in countries that are mostly exposed to real shocks. The rationale for this argument is that the exchange rate accommodates the required change in relative prices that domestic prices are temporarily unable to do by themselves, thereby dampening any real effects. In contrast, under a fixed exchange rate, the real side of the economy bears the burden of the adjustment (e.g. a recession in case of a negative terms of trade shock) so as to make relative prices progressively and costly adapt to the new equilibrium. This paper shows that under currency mismatch, the degree of openness matters for the selection of an exchange rate regime. Specifically, conventional wisdom only holds for sufficiently open economies. For relatively closed economies, on the contrary, fixed exchange rate regimes are better (real) shock absorbers. During the Asian crisis of 1997 entrepreneurs in most developing countries were under a currency mismatch: debts were in foreign currency1 – while sales were usually priced in domestic currency. This gives a salient role to the balance sheet (or credit) channel2: if the economy is unexpectedly “forced” into a real depreciation, the burden of debt instantaneously jumps while revenues, at best, remain constant in domestic currency. Consequently, entrepreneurs’ net worth decreases, many firms are unable to repay their debts and go bankrupt, and output decreases because of the decreased ability of firms to raise funds to finance the purchase of additional capital. In response to this, some models introduce balance sheet effects in a general equilibrium setting with nominal rigidities (e.g. Cespedes et al., 2001a, Cespedes et al., 2001b and Cespedes et al., 2004, CCV henceforth, or Gertler et al. (2007)), and claim that (Friedman’s) conventional wisdom is still valid. In these models, the expansionary effects of the real depreciation offset the contractionary balance sheet effects generated by the currency mismatch. This implies that floats should be preferred to fixed regimes in order to absorb real shocks. Moreover, CCV claim that the balance sheet effect can not offset the expansionary effects of depreciations unless unrealistic assumptions on parameter values are considered.3 Closely related to this paper, Devereux et al. (2006) build a small open economy with financial frictions as well as tradables and non-tradables. The latter focusses on the role that the degree of exchange rate pass through plays in choosing an exchange rate regime (or more generally, alternative monetary rules), and on welfare evaluations of alternative regimes. Elekdag and Tchakarov, 2004 and Elekdag and Tchakarov, 2007 also thoroughly study the welfare effects of alternative exchange rate regimes under balance sheet effects; the results of the latter are in line with my findings (see below) but focused on the existence of a threshold level of debt-to-GDP for fixed exchange rates to dominate flexible ones. Cook (2004) shows how financial frictions can make depreciations to be contractionary. The present paper fits into the literature in this cluster, separating from the rest by giving a central role to the degree of openness.4 The empirical evidence is mixed. Broda, 2004, Edwards and Levy-Yeyati, 2002, Levy-Yeyati and Sturzenegger, 2001a and Levy-Yeyati and Sturzenegger, 2001b present evidence consistent with flexible exchange rate regimes being better than fixed regimes in absorbing terms of trade shocks. Calvo and Reinhart, 2001, Calvo and Reinhart, 2002, Calvo et al., 2002, Hausmann et al., 1999 and Devereux, 2001, document that the output effects of real shocks are larger in countries with flexible exchange rate regimes when compared with countries that fix their exchange rate.5 In a purely empirical companion paper I document that the output response to terms of trade shocks depends on the degree of openness of the economy. Fig. 1 shows the impulse response of a panel VAR in which the observations are separated by the degree of openness. For each subset, the evidence shows the effect of a similar shock to fixed versus flexible exchange rate regimes. For foreign-currency indebted countries, relatively open economies tend to be better insulated from real shocks (in terms of output dynamics) when they are under a flexible exchange rate regime. However, relatively closed economies are able to buffer the real shock better if they are ruled by a fixed regime.

Thus, the contribution of this paper focuses on explaining why the choice of the exchange rate regime should be contingent on the degree of openness of the economy and the degree of currency mismatch. Specifically, in response to real shocks such as terms of trade, international interest rate or export demand shocks, some countries will be better served by fixed regimes, whereas some others will be better off with flexible arrangements. In the present version, only terms of trade shocks will be considered. This is in order to replicate the empirical findings mentioned above.6 It is also the shocks studied by Devereux et al., 2006 and Broda, 2004 among others – which seem relevant to emerging economies. The exchange rate regime choice depends on the share of non-tradable goods in aggregate output and the ratio of the foreign-currency-denominated debt to total debt. I build a Stochastic dynamic general equilibrium (SDGE) model with nominal rigidities, financial frictions and foreign-currency-denominated debt to explain these stylized facts. Using this framework, the specific contributions of this paper are the following. First, I show that the higher the share of tradables in GDP (i.e. the higher the degree of openness of the economy), the higher the likelihood that a flexible exchange rate regime will perform better as a shock absorber. Conversely, the more closed to trade an economy is, the more likely that a fixed regime will be the optimal choice. The intuition behind this result is as follows. Entrepreneurs (borrowers) pay an external finance premium that is increasing in their leverage. If a real devaluation results from a negative real shock, the devaluation generates a jump in the real value of debt: the balance sheet effect. For producers of tradables, the expansionary effects of the real devaluation compensate the contractionary balance sheet effect. However, non-tradables are adversely affected since they lack a “rest of the world” which they can re-direct the excess supply generated by the fall in domestic demand but they are affected by the balance sheet effect. This reduces revenues – both prices and quantities fall and thus reduces the ability of entrepreneurs to purchase the necessary capital for future production. It also generates an intertemporal link, due to the increased external finance premium that results from a higher leverage, which reduces the ability to purchase capital in the future. Furthermore, since the reduction in the demand for capital reduces the equilibrium price of capital, this reduces current net worth further as well as future net worth – thus exacerbating the intertemporal propagation – and therefore the external finance premium. As a result of this process, some sectors of the economy benefit with a flexible exchange rate, whereas some others would be better served by a peg. Thus, the selection of the exchange rate regime hinges on the weight that each of these sectors has within the aggregate economy. Producers of tradable goods benefit not only because the real depreciation switches expenditures away from foreign-tradables and non-tradables and toward domestic tradables, but also due to differences in price adjustments. If the economy is relatively more open, the price of non-tradable goods drops more under a fixed exchange rate (further affecting the balance sheet), whereas in the relatively closed economy the price of non-tradables drops less under a fixed exchange rate. The rationale for the latter lies in that the smaller the size of the non-tradable sector the larger the price adjustment should be for the market to clear.7 Second, I extend Irving Fisher’s debt-deflation theory for open economies. If the ex-post real return to capital is lower than expected or the ex-post real devaluation ends up being higher than expected, the external finance premium that entrepreneurs pay on loans increases in at an increasing rate. The greater the currency mismatch is when the real price changes, the greater the increase in entrepreneurs’ borrowing premium. I show that this is because the elasticity of the risk premium with respect to unanticipated devaluations (as well as to real return to capital changes) is increasing in the level of leverage at the moment the shock occurs. In this sense, small unexpected shocks to the economy get amplified and propagate business cycles.8 Furthermore, as before, this affects the non-tradable sector more than the tradable sector. The paper is organized as follows. Section 2 describes the general equilibrium model, including nominal rigidities, currency mismatch and the balance sheet effect. Section 3 shows the magnification effect of unanticipated changes in real prices on the risk premium, as well as its effect on the economy conditional on the degree of foreign-currency indebtedness and the degree of openness. Section 4 analyzes the impulse response of the economy to real shocks, controlling for the degree of openness of the economy, and presents the main results of the paper. Finally, Section 5 concludes and suggests some extensions.