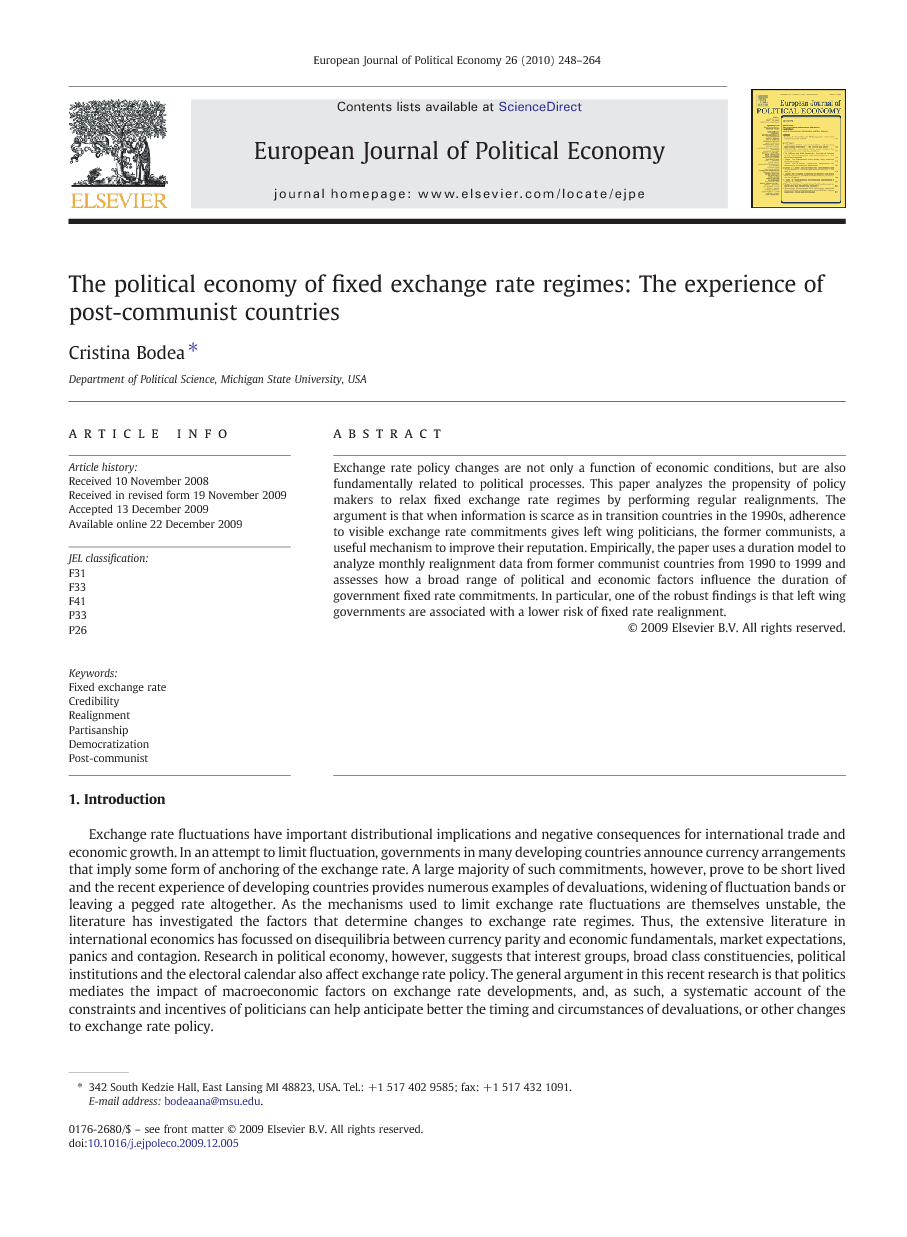 Exchange rate policy changes are not only a function of economic conditions, but are also fundamentally related to political processes. This paper analyzes the propensity of policy makers to relax fixed exchange rate regimes by performing regular realignments. The argument is that when information is scarce as in transition countries in the 1990s, adherence to visible exchange rate commitments gives left wing politicians, the former communists, a useful mechanism to improve their reputation. Empirically, the paper uses a duration model to analyze monthly realignment data from former communist countries from 1990 to 1999 and assesses how a broad range of political and economic factors influence the duration of government fixed rate commitments. In particular, one of the robust findings is that left wing governments are associated with a lower risk of fixed rate realignment.

At the beginning of transition several post-communist countries had a policy of publicly and visibly making commitments for their exchange rates. Transition countries used fixed exchange rates mainly to gain anti-inflationary credibility. Yet the fixed rate instrument has been realigned frequently and, at times, realignments occurred in situations when currency markets did not appear to press stringently for a change. This paper first seeks to explain the political economy of fixed rate realignments. The explanation revolves around the visibility of announced rules for the behavior of the exchange rate, the visibility of adjustments to such rules and the need of politicians to gain credibility in macro policy. Second, the paper analyzes empirically how a broad range of economic and political factors influence the timing of exchange rate realignments on monthly data from seven former communist countries from 1990 to 1999. The paper addresses several real world features of exchange rate policy that are relevant for developing countries. In particular, the analysis captures the fact that emerging markets use intermediate options for the exchange rate regime and that fixed rates or other announced rules governing the exchange rate regime can and are often adjusted. That is, we investigate the causes of those exchange rate realignments which make de jure pegged rate arrangements become de facto floats or de facto bands. Further, the paper attempts to quantitatively assess the extent to which policy makers are actively trying to build or improve their reputation in macro policy. Frequently developing countries are described in terms of an acute lack of credibility of institutions and politicians. The analysis here investigates the extent to which left wing politicians, the heirs to former communist parties, manage the exchange rate regime with an eye toward becoming more credible with markets and the public. The case has been made before that left wing parties pay the costs associated with fixed rates because of their greater need for credibility. Here we modify the argument in line with the reality that fixed rates are adjusted frequently, even if the confidence building characteristics of a fixed exchange rate regime are undermined. Thus we argue that left wing governments will refrain from actions that damage the credibility of the fixed rate instrument. The left will then be identified with a fixed exchange rate regime in which realignments of the currency while maintaining the fix are infrequent, especially when markets are testing the resolve of the government. The empirical results on data from transition countries are supportive: The left has a lower expected probability of ending currency commitments, even in a currency crisis. Also, the analysis reveals that real exchange appreciation does not influence realignments under a crawling regime, confirming that much of inflation is indeed incorporated in the nominal exchange rate via the announced devaluations. Interestingly, despite this, currency crises appear to prompt realignments to crawling rates, but not to pegged rates. The results suggest that policy makers may feel less bound by the rules of the crawl and have fewer reservations to adjust a crawling peg. Such behavior on the part of policy makers, in turn, would add to the concern that intermediate regimes like the crawl are vulnerable to speculative crises.