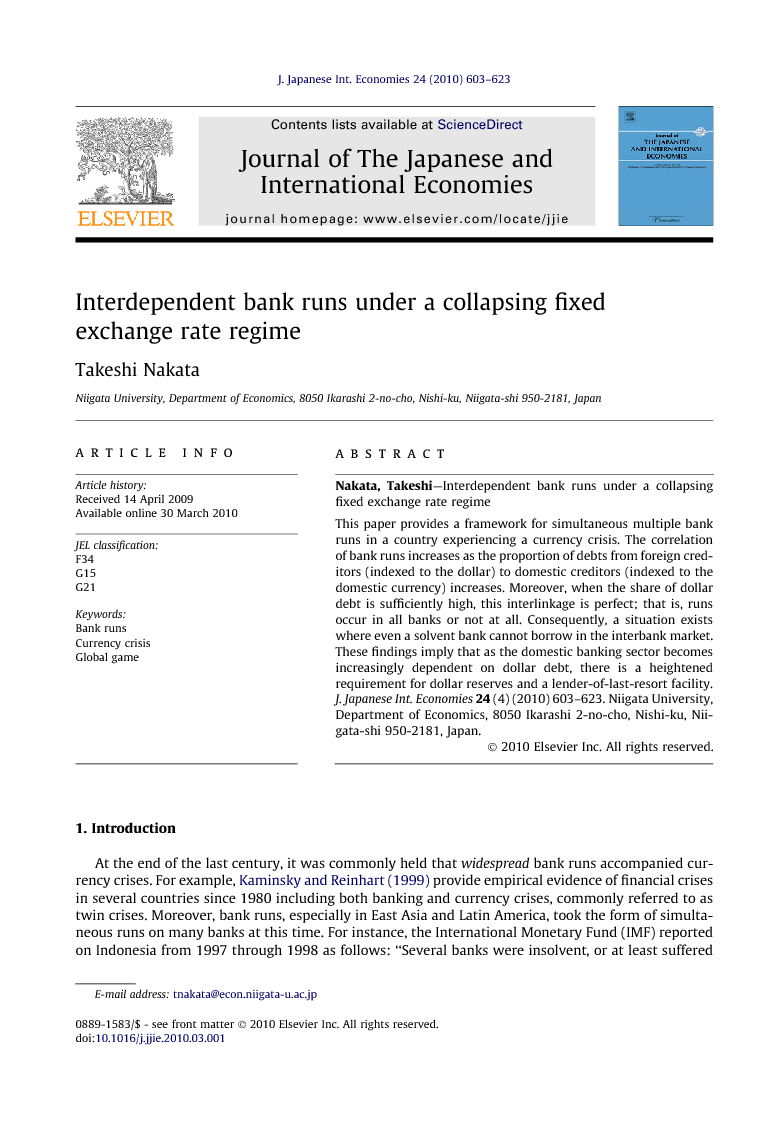 This paper provides a framework for simultaneous multiple bank runs in a country experiencing a currency crisis. The correlation of bank runs increases as the proportion of debts from foreign creditors (indexed to the dollar) to domestic creditors (indexed to the domestic currency) increases. Moreover, when the share of dollar debt is sufficiently high, this interlinkage is perfect; that is, runs occur in all banks or not at all. Consequently, a situation exists where even a solvent bank cannot borrow in the interbank market. These findings imply that as the domestic banking sector becomes increasingly dependent on dollar debt, there is a heightened requirement for dollar reserves and a lender-of-last-resort facility.

In this paper, we developed a model in which multiple bank runs occur at the same time in a country where the pegged exchange rate breaks down. We showed that a bank run in one bank makes the domestic currency depreciate, and therefore claims denominated by dollars in another bank in the same country are also withdrawn early. This strategic complementarity becomes stronger as the proportion of foreign creditors in the banking system becomes larger. Moreover, when the number of foreign creditors exceeds a certain level, there is a perfect correlation; that is, a bank run occurs in all banks or no bank. Consequently, the interbank market does not function well, and therefore a LLR facility and dollar reserves become more essential as the proportion of foreign creditors increases. Moreover, this serves as an additional reference to recent discussion on how much the government should hold in dollar reserves. Our model implies that if the domestic financial system mainly consists of banks, as the domestic banking sector becomes more dependent on dollar debt, more dollar reserves are required for execution of the LLR. Our model does not include the flight to quality; that is, creditors move from one bank to another at Date 1, perceiving the second as being less likely to fail. In fact, this behavior has been seen in the Asian and Latin American crises (see, for instance, Berg, 1999 and Domac et al., 1999). If foreign creditors simply move their credit to another bank in the same country whose return is higher, the dollar reserves do not fall, and the fixed exchange rate never collapses. Therefore, we must reexamine our results. Nevertheless, actual flight to quality is never sufficiently extensive to stabilize the currency. One possible explanation is that creditors must take the risk of reinvesting the withdrawn credit in the same country because a speculative attack coincides with the bank run, as in Goldstein (2005). We omit this in our model for simplicity. Another explanation is that foreign creditors may not have enough information on other banks in the same developing country and therefore hesitate to reinvest in these banks. However, more elaborate analysis would make these topics of discussion clearer. The technique in our model largely depends on the global game originating in Carlsson and van Damme, 1993 and Morris and Shin, 1998. A key feature is the assumption that an agent does not have common knowledge about the fundamentals, bringing with it the result that the equilibrium is unique. However, recent studies show that the equilibrium is not necessarily unique, even in a situation lacking common knowledge. For instance, Hellwig et al., 2006 and Angeletos and Werning, 2006 have modified the global game framework to allow endogenously determined prices. Likewise, Angeletos (2006) introduced the endogenous information generated by policy interventions into the framework. Moreover, Angeletos et al. (2007) extended the conventional model of a global game, entailing a simultaneous move game, to a sequential move game. In these models, they assure multiplicity under certain conditions. If by introducing these modifications in our analysis these multiple equilibria exist, it would be harder to examine under what conditions widespread bank runs are more likely to occur. However, this extension is worthy of attention and an interesting topic for future research.