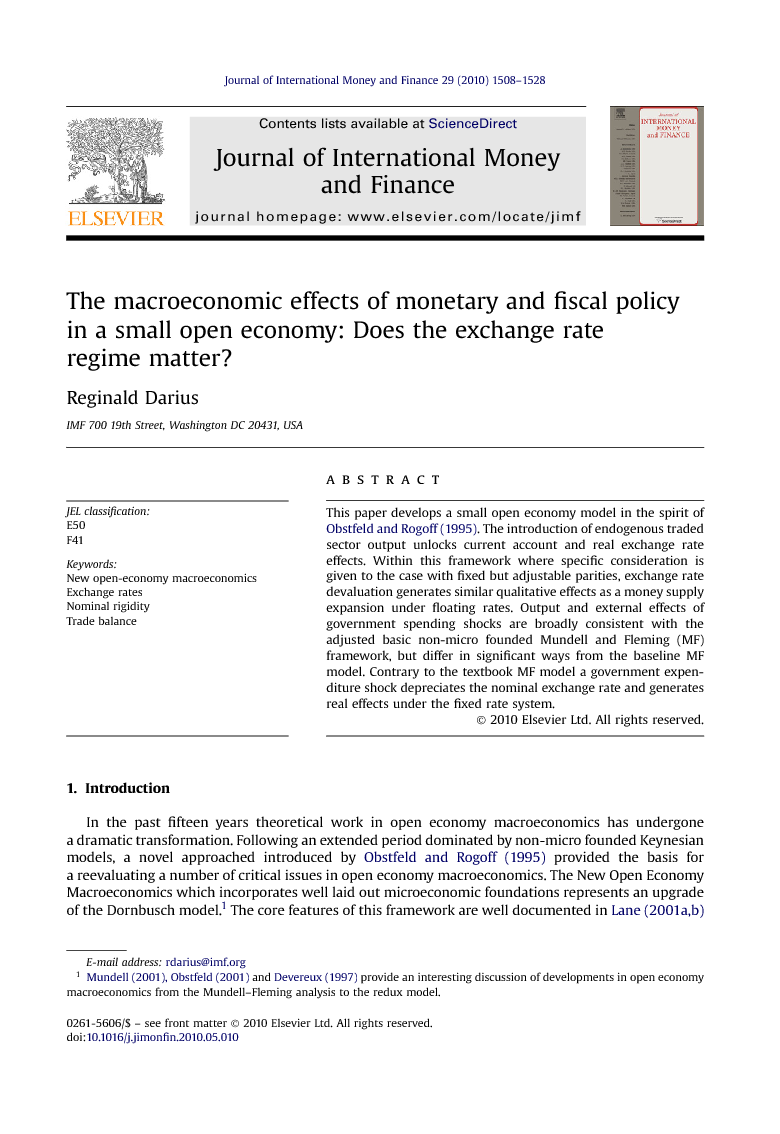 This paper develops a small open economy model in the spirit of Obstfeld and Rogoff (1995). The introduction of endogenous traded sector output unlocks current account and real exchange rate effects. Within this framework where specific consideration is given to the case with fixed but adjustable parities, exchange rate devaluation generates similar qualitative effects as a money supply expansion under floating rates. Output and external effects of government spending shocks are broadly consistent with the adjusted basic non-micro founded Mundell and Fleming (MF) framework, but differ in significant ways from the baseline MF model. Contrary to the textbook MF model a government expenditure shock depreciates the nominal exchange rate and generates real effects under the fixed rate system.

In the past fifteen years theoretical work in open economy macroeconomics has undergone a dramatic transformation. Following an extended period dominated by non-micro founded Keynesian models, a novel approached introduced by Obstfeld and Rogoff (1995) provided the basis for a reevaluating a number of critical issues in open economy macroeconomics. The New Open Economy Macroeconomics which incorporates well laid out microeconomic foundations represents an upgrade of the Dornbusch model.1 The core features of this framework are well documented in Lane, 2001a and Lane, 2001b and Ganelli and Lane (2002) and include optimizing agents, incorporation of nominal rigidities and market imperfections.2 The (NOEM) framework has been used extensively to perform two country analyses. This has allowed researchers to delve deeply into issues such as international policy coordination and spillover effects of domestic monetary and fiscal policies. Stochastic extensions of the model as developed by Obstfeld and Rogoff, 1998 and Devereux and Engel, 1998 and Tille (2002) focused on a similar theme. The two country framework is most appropriate if the unit of analysis is a relatively large or two equally sized economies.3 Despite the availability of a tractable method of analyzing small open economy issues within the new framework, it has remains largely unexplored.4 This represents a significant void in the literature and also creates a slight disconnect between theoretical emphasis and empirical realities. The original small open economy model, developed by Obstfeld and Rogoff, 1995 and Obstfeld and Rogoff, 1996 is built on very strong assumptions. The most critical of which is the treatment of tradeable output as an endowment. The endowment framework along with logarithmic preferences and interest rates tied to the rate of time preference generates a smooth path for consumption. With zero initial foreign assets, even in the presence of one period nominal rigidity the current account balance remains permanently at zero in the aftermath of a monetary shock.5 Current account disequilibrium is only possible in the aftermath of a temporary productivity shock to the traded goods sector. This outcome is essential since a central component of the debate in open economy macroeconomics in the aftermath of Mundell (1962) contribution, has focused on the effects of monetary and fiscal policy when a country is able to delink absorption from production in a sticky price environment. The empirical disconnect of models which excludes current account dynamics is more apparent given recent developments in emerging markets and particularly Eastern Europe. Over the past decade many emerging European economies6 was characterized by rapid income growth and widening current account deficits which in some cases occurred side by side with widening fiscal balances.7 For example the current account deficits of Greece and Ireland stood at 4.6 and 13.9 percent respectively as of end 2008, while others such as Latvia and Estonia had double digit deficits. In the aftermath of the global economic crisis a number of countries have implemented monetary and fiscal policy adjustments to stabilize the domestic economy and restore external balance. Adequate modeling of these dynamics would require models which specifically allows for evaluation of how the current account responds to policy shocks. The model developed in this paper will at a minimum provide some broad indication on the likely effect of these policy interventions. Research on the small open economy model has for the most part adopted the endowment framework. Hau (2002) adopted this structure to examine the effects of openness on the volatility of the real exchange rate, while Lane (1997) examines the influence of trade openness on inflation. Lane, 2001a and Lane, 2001b and Cavallari (1999) are the only known instances where this framework has been utilized to analyze current account effects of monetary shocks, while Tervala (2007) examines the current account effects of fiscal shocks. However these studies retained the assumption of exogenous tradeable sector output.8,9Fender and Rankin (2002) introduced staggered wage setting and evaluated the impact of unanticipated increases in money supply, however the role of exchange rate regimes was not central in their one sector model. In contrast to these models this paper evaluates the effects of a monetary shock when traded output is endogenous and also considers the effects of fiscal shocks in a similar setting. In examining the impact of fiscal shocks this paper adds to this strand of the NOEM literature, following in the tradition of Senay (1998), Corsetti and Pesenti, 2001, Caselli, 2001 and Lane, 2003, Tervala (2007) and Ganelli, 2003 and Ganelli, 2005). The structure of the paper is as follows. In Section 2 the model is presented with a description of its components. Section 3 solves for the symmetric equilibrium with fully flexible product and factor markets and introduces a log-linearized version of the model, which is used to analyze the effects of monetary shocks with one period wage rigidity. In Section 4 the model is altered to consider the effects of government spending shocks.

In this paper the original small open economy NOEM model was reconstructed by endogenising the production of the tradeable sector. This modification unlocks current account effects in the aftermath of an unanticipated monetary expansion. The monetary shock precipitated a short-run boom in the domestic economy and unambiguously improved the trade balance resulting in an accumulation of wealth. In the long-run the current account turns negative as wealthier agents decreased work effort, whilst consuming more of the tradable good. In contrast to the decline in traded goods output a monetary expansion stimulates long-run non-traded sector output. The exchange rate jumped immediately to its long run level. Consistent with most of the recent literature within the NEOM framework, there was no evidence of overshooting. It was demonstrated that the exchange rate is less volatile than money supply. A monetary shock generates a less than proportionate response of the exchange rate. The basic properties of the fixed exchange rate version of the model were also examined. It was illustrated that devaluation generates identical qualitative effects as a monetary expansion in the flexible rate system. The model was then extended to consider the effects of a balanced budget government shock to traded and non-traded goods. A range of fairly interesting results were obtained from this analysis. Firstly it is shown as in the general case of the M-F type models, a tax financed fiscal shock irrespective of whether it was related to traded or non-traded goods resulted in a depreciation of the nominal exchange rate. Secondly it was clearly demonstrated that the short and long run impact of fiscal shocks on output and external balance was highly sensitive to type of government spending shock. Shocks to non-traded goods under fixed exchange rates are expansionary, whilst traded goods spending shocks were expansionary under the flexible exchange rate but contractionary with a fixed exchange rate.