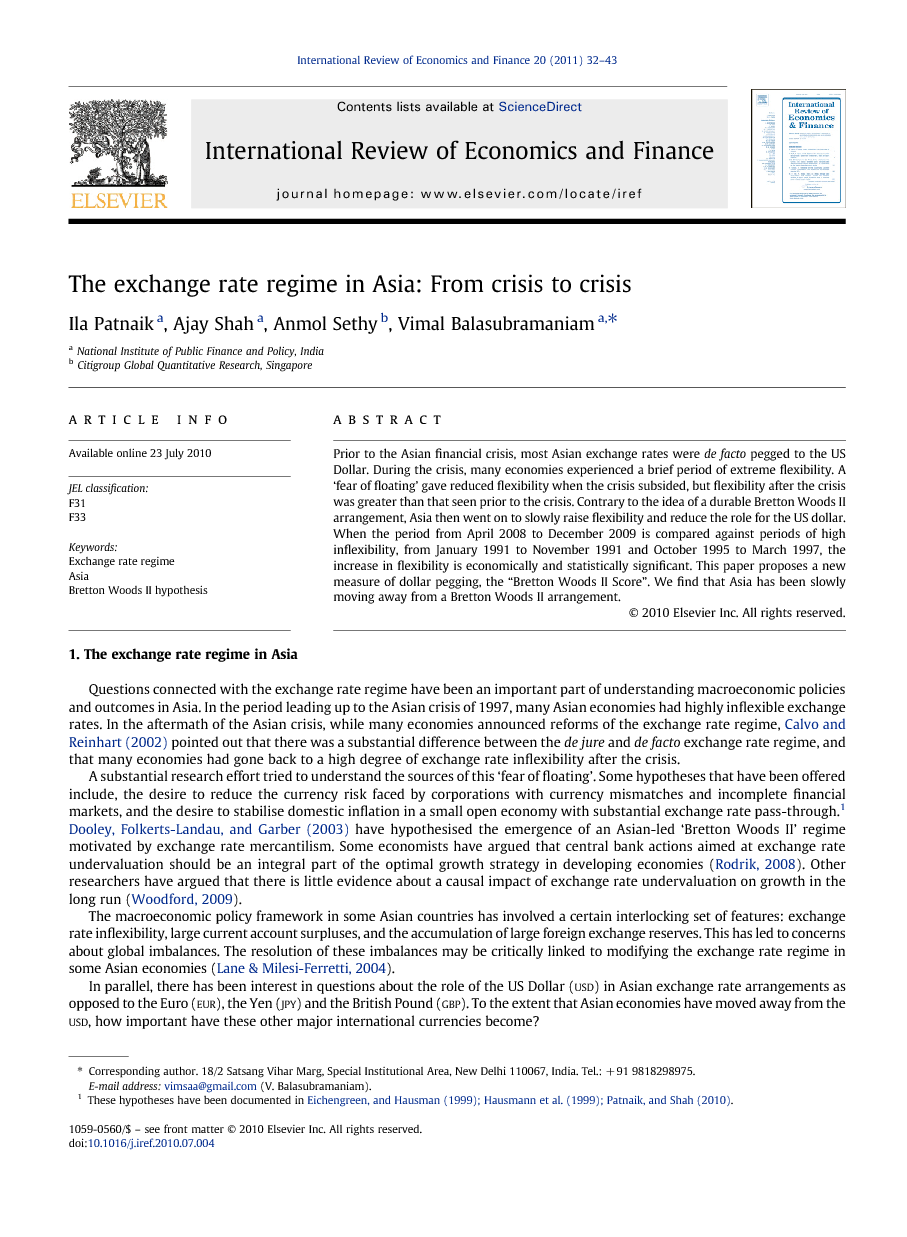 Prior to the Asian financial crisis, most Asian exchange rates were de facto pegged to the US Dollar. During the crisis, many economies experienced a brief period of extreme flexibility. A ‘fear of floating’ gave reduced flexibility when the crisis subsided, but flexibility after the crisis was greater than that seen prior to the crisis. Contrary to the idea of a durable Bretton Woods II arrangement, Asia then went on to slowly raise flexibility and reduce the role for the US dollar. When the period from April 2008 to December 2009 is compared against periods of high inflexibility, from January 1991 to November 1991 and October 1995 to March 1997, the increase in flexibility is economically and statistically significant. This paper proposes a new measure of dollar pegging, the “Bretton Woods II Score”. We find that Asia has been slowly moving away from a Bretton Woods II arrangement.

Questions connected with the exchange rate regime have been an important part of understanding macroeconomic policies and outcomes in Asia. In the period leading up to the Asian crisis of 1997, many Asian economies had highly inflexible exchange rates. In the aftermath of the Asian crisis, while many economies announced reforms of the exchange rate regime, Calvo and Reinhart (2002) pointed out that there was a substantial difference between the de jure and de facto exchange rate regime, and that many economies had gone back to a high degree of exchange rate inflexibility after the crisis. A substantial research effort tried to understand the sources of this ‘fear of floating’. Some hypotheses that have been offered include, the desire to reduce the currency risk faced by corporations with currency mismatches and incomplete financial markets, and the desire to stabilise domestic inflation in a small open economy with substantial exchange rate pass-through.1Dooley, Folkerts-Landau, and Garber (2003) have hypothesised the emergence of an Asian-led ‘Bretton Woods II’ regime motivated by exchange rate mercantilism. Some economists have argued that central bank actions aimed at exchange rate undervaluation should be an integral part of the optimal growth strategy in developing economies (Rodrik, 2008). Other researchers have argued that there is little evidence about a causal impact of exchange rate undervaluation on growth in the long run (Woodford, 2009). The macroeconomic policy framework in some Asian countries has involved a certain interlocking set of features: exchange rate inflexibility, large current account surpluses, and the accumulation of large foreign exchange reserves. This has led to concerns about global imbalances. The resolution of these imbalances may be critically linked to modifying the exchange rate regime in some Asian economies (Lane & Milesi-Ferretti, 2004). In parallel, there has been interest in questions about the role of the US Dollar (usd) in Asian exchange rate arrangements as opposed to the Euro (eur), the Yen (jpy) and the British Pound (gbp). To the extent that Asian economies have moved away from the usd, how important have these other major international currencies become? In this setting, the following four questions are of interest: 1. In the period immediately after the Asian crisis, did Asian economies go back to pre-crisis levels of exchange rate flexibility? 2. Did Asian economies then evolve into a durable ‘Bretton Woods II’ arrangement, featuring exchange rate inflexibility and pegging to the usd? 3. To what extent have Asian exchange rate regimes shifted focus from the usd to the eur, the jpy and the gbp? 4. To what extent did exchange rate regimes encounter an abrupt change in the global financial crisis of 2008, when compared with the experience of 1997? In this paper, we offer new evidence on these questions. The role of the dollar as a predominant international currency to which Asian countries peg is explicitly explored. We propose a ‘Bretton Woods II Score’. Prior to the Asian crisis, the average bw-II Score was high. The score dropped sharply during the crisis and rose again after it. However, after 2006 the score declined. This suggests that Asia has slowly moved away from the tight dollar pegging. The remainder of this paper is organised as follows. Section 2 explains the methodology used to measure the fine structure of exchange rate regimes in Asia, and obtain dates of structural change of the exchange rate regime. Section 3 analyses the results obtained by measurement and dating of the de facto currency regime in each economy in order to address the four questions enumerated above. Detailed results for each of the 11 economies have been placed in an appendix, and Section 4 concludes.

In this paper, a new strategy for measurement of the de facto exchange rate regime has been brought to bear on questions about the Asian exchange rate regime. As has been widely observed in the literature, the Asian Crisis of the mid 1990s was preceded by a period of acute exchange rate inflexibility. In our results, the average R2 was 0.916 from January 1991 till June 1996. During the Asian crisis, flexibility rose sharply. As has been widely observed in the literature, once the crisis subsided, Asia returned to significant inflexibility. However, our point estimates show that the mean R2 after the crisis was at 0.833, which implies somewhat greater flexibility when compared with the pre-crisis environment. From 2000 onwards, while Asia was characterised as having a ‘Bretton Woods II’ configuration, exchange rate inflexibility was not at pre-crisis levels. From March 2004 onwards, the point estimator for the mean R2 has consistently declined. In the latest period, from April 2008 to December 2009, the point estimate stood at 0.734. When this period is compared against the pre-crisis period from October 1995 to June 1997, the null hypothesis of no-change can be rejected at a 95% level of significance. Hence, the picture is one where Asia is slowly moving towards greater flexibility. In the Asian crisis of the mid 1990s, currency flexibility rose sharply as pegged exchange rates broke down. There has been no comparable movement in the global crisis of 2008. Underlying the location estimators, there is significant heterogeneity amongst Asian economies. China and Hong Kong have adopted pegged and linked exchange rate regimes respectively. Economies like India have an exchange rate regime that is more intermediate in character. Korea and Indonesia have de facto moved to a floating exchange rate regime. Appendix presents detailed results for each Asian economy documenting the heterogeneity in de facto exchange rate regimes in Asia. In terms of the role of the four major currencies, there has been a significant decline in the role of the usd, from a pre-crisis average coefficient of 0.918 to a current value of 0.789. The null hypothesis of no-change is rejected at a 95% level of significance. There has been a strong rise of the eur and a small role for the gbp. While the average jpy coefficient was positive from April 1994 to April 2005, in the following period the null hypothesis of zero cannot be rejected. The “Bretton Woods II Score” suggests that Asia was tightly pegged to the dollar in the pre-Asian crisis years and for some years after the crisis. However, since 2006 Asia has moved away from tight pegging to the US dollar.