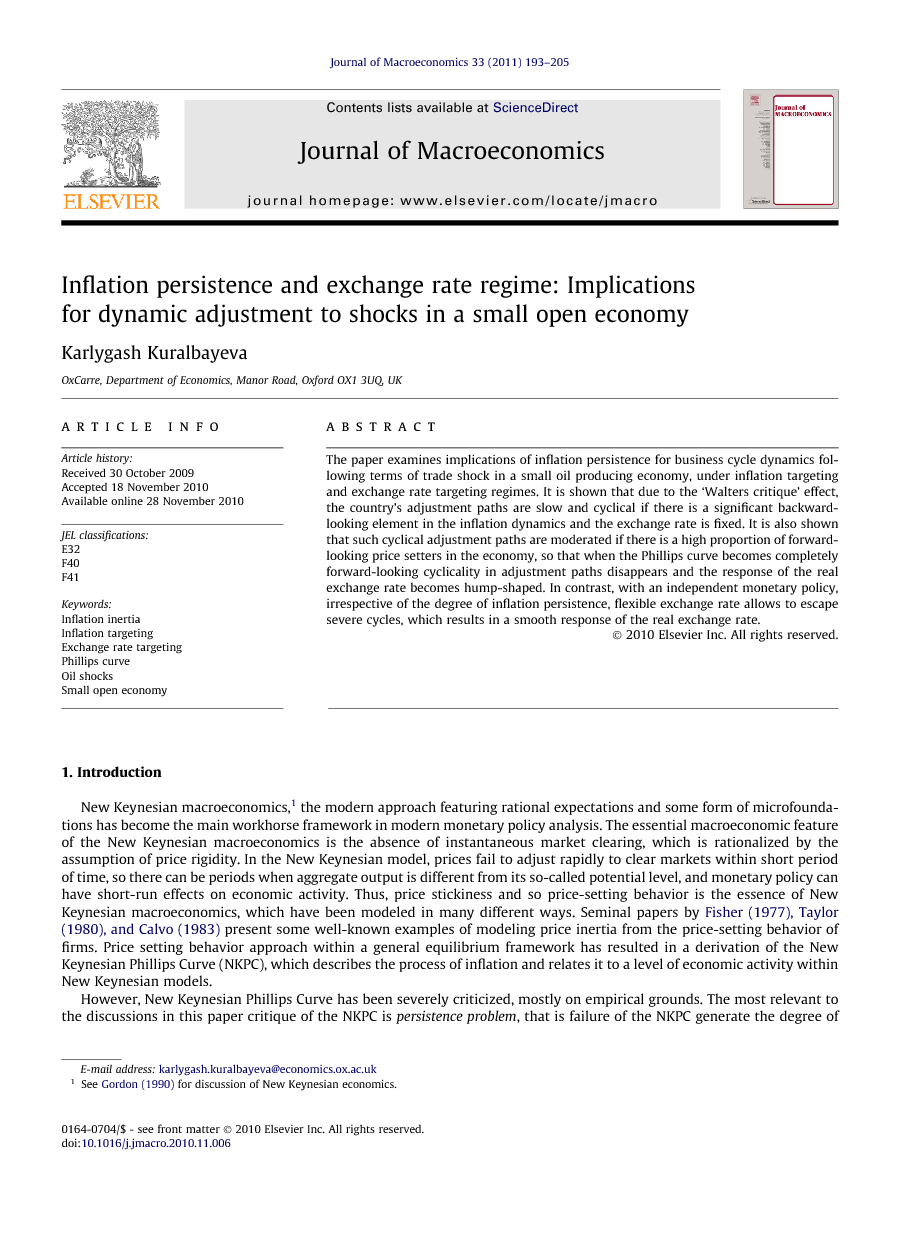 The paper examines implications of inflation persistence for business cycle dynamics following terms of trade shock in a small oil producing economy, under inflation targeting and exchange rate targeting regimes. It is shown that due to the ‘Walters critique’ effect, the country’s adjustment paths are slow and cyclical if there is a significant backward-looking element in the inflation dynamics and the exchange rate is fixed. It is also shown that such cyclical adjustment paths are moderated if there is a high proportion of forward-looking price setters in the economy, so that when the Phillips curve becomes completely forward-looking cyclicality in adjustment paths disappears and the response of the real exchange rate becomes hump-shaped. In contrast, with an independent monetary policy, irrespective of the degree of inflation persistence, flexible exchange rate allows to escape severe cycles, which results in a smooth response of the real exchange rate.

New Keynesian macroeconomics,1 the modern approach featuring rational expectations and some form of microfoundations has become the main workhorse framework in modern monetary policy analysis. The essential macroeconomic feature of the New Keynesian macroeconomics is the absence of instantaneous market clearing, which is rationalized by the assumption of price rigidity. In the New Keynesian model, prices fail to adjust rapidly to clear markets within short period of time, so there can be periods when aggregate output is different from its so-called potential level, and monetary policy can have short-run effects on economic activity. Thus, price stickiness and so price-setting behavior is the essence of New Keynesian macroeconomics, which have been modeled in many different ways. Seminal papers by Fisher, 1977, Taylor, 1980 and Calvo, 1983 present some well-known examples of modeling price inertia from the price-setting behavior of firms. Price setting behavior approach within a general equilibrium framework has resulted in a derivation of the New Keynesian Phillips Curve (NKPC), which describes the process of inflation and relates it to a level of economic activity within New Keynesian models. However, New Keynesian Phillips Curve has been severely criticized, mostly on empirical grounds. The most relevant to the discussions in this paper critique of the NKPC is persistence problem, that is failure of the NKPC generate the degree of inflation persistence observed in the data.2 The origin of this problem is forward-looking nature of the NKPC where inflation today depends on the sequence of expected future output gaps. This implies that there is no structural relationship between current and lagged inflation, and all persistence in inflation comes from the persistence in the output-gap term. These observations about the NKPC have motivated many researches to develop theoretical models which introduce inflation persistence. In the micro-founded way the literature suggests two main mechanisms. First is an introduction of a rule-of-thumb price-setting behavior by some firms (Galı´ and Gertler, 1999 and Steinsson, 2003). The second mechanism is a backward-looking price indexation (Christiano et al., 2001 and Smets and Wouters, 2002). As a result, there is a large number of papers that incorporate inflation persistence into stochastic general equilibrium models to study different issues (e.g., Christiano et al., 2001, Leitemo, 2002, Benigno and Thoenissen, 2003 and Smets and Wouters, 2002). Within this literature, closest to the spirit of this paper, are papers by Leitemo, 2002 and Leitemo and Røisland, 2002, which have studied the implications of inflation persistence for a design of optimal monetary policy rules for open economies. Results of both of these papers suggest that exchange rate targeting regime leads to the highest social loss of all regimes considered in the papers. The main reason behind this result is that targeting the nominal exchange rate gives rise to the ‘Walters Critique’ effect, mechanism coming from the real interest rate under a fixed exchange rate regime, named after Sir Alan Walters, who drew attention to the potentially destabilizing real interest rate response at the time when the UK entered the ERM in 1990. It is important to note that the main limitation of the methodology employed in Leitemo, 2002 and Leitemo and Røisland, 2002 remains to be reduced-form structure of their macromodels used for policy evaluation. As a result, the non-microfounded structure of their models make them subject to the Lucas critique. The reduced form macromodels also lacks an important feature of the microfounded models those coefficients are directly related to the deep structural parameters of the model. In contrast, this paper employees a micro-founded optimization framework and introduces inflation persistence via rule-of-thumb price-setting behavior. The model is then used to study how inflation persistence shapes the dynamics of adjustment to the terms of trade shock in a oil producing country, under two alternative monetary policy regimes: inflation targeting and exchange rate targeting regimes. The aim of the paper is threefold. First, I analyze in details the dynamic adjustment to the terms of trade shock in oil-rich economy. Specifically, I draw attention to the possibility of the ‘Walters critique’ effect under exchange rate targeting regime in resource-rich economies subject to terms of trade shock. Second, I show that the extent of ‘cyclicality’ depends on the number of forward-looking price setters in the economy. The more forward-looking price setters in the economy, the less pronounced the Walters critique effect. Third, the microfounded structure of the model of the paper allows to derive the degree of inflation persistence as an explicit function of the structural parameters of the model and to analyze sensitivity of the results to the choice of those parameters. In particular, the paper studies how the emergence of oscillatory behavior in series is affected by the value of the Calvo parameter and it also provides simulated estimate of the threshold value of degree of inflation inertia which generates the Walters effect. This will suggest an important guidelines for a design of monetary policy in resource-rich economies, given the uncertainty of inflation persistence and price stickiness in those countries. It is also necessary to note that this study does not attempt to evaluate whether one exchange rate regime would be potentially beneficial than the other, when the economy exhibits significant degree of inflation inertia. Neither does this study examine the question of optimal monetary policy (optimal interest rate rule) and no attempt is made to derive ‘optimal’ feedback parameters in the interest rate rules, conditional on the degree of inflation persistence in the Phillips curve. The reminder of the paper is structured as follows. Section 2 describes the model and defines a competitive equilibrium for the economy. Section 3 discusses calibration of the model. The simulation results are presented in Section 4. Section 5 concludes.