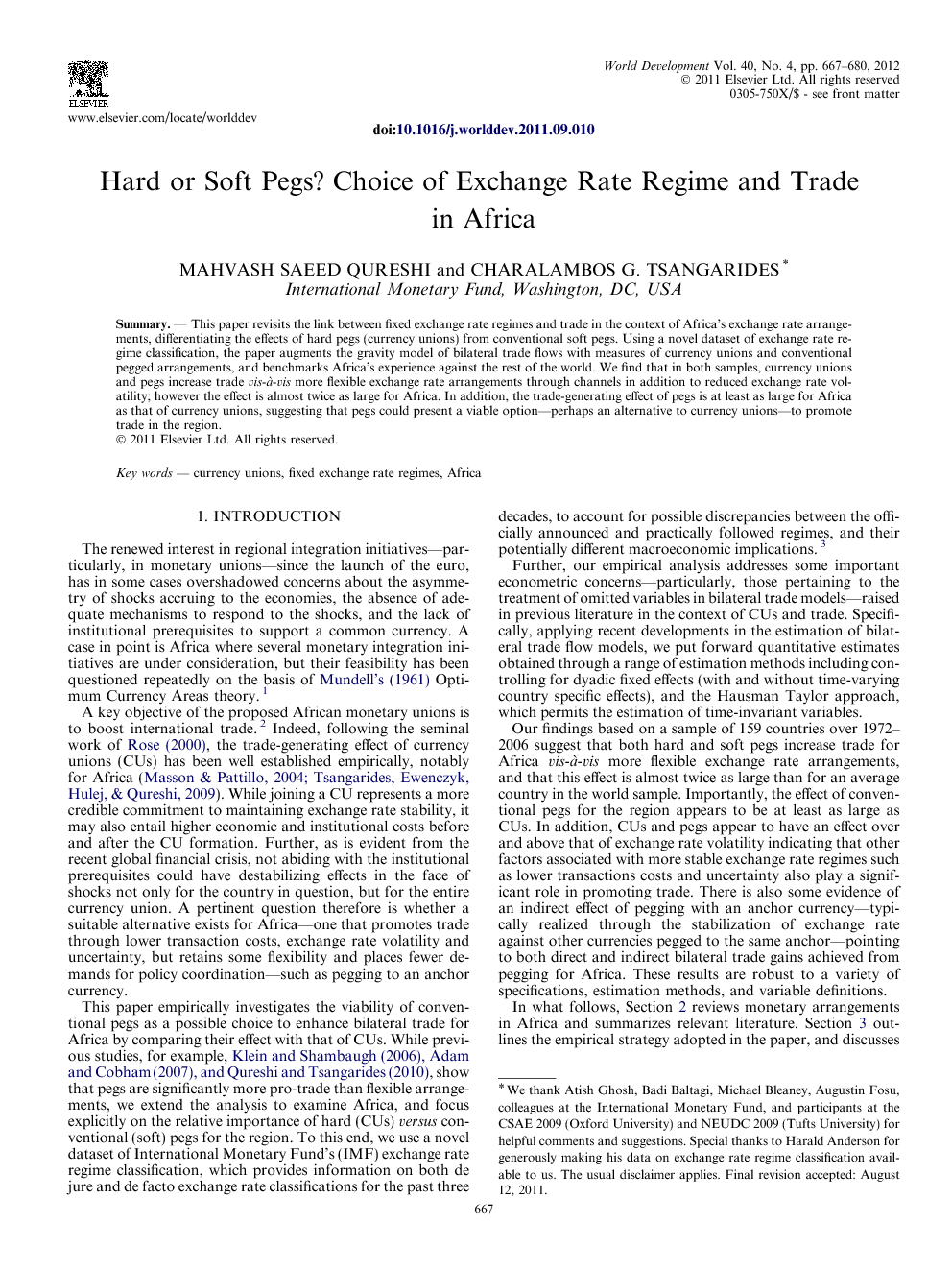 The renewed interest in regional integration initiatives—particularly, in monetary unions—since the launch of the euro, has in some cases overshadowed concerns about the asymmetry of shocks accruing to the economies, the absence of adequate mechanisms to respond to the shocks, and the lack of institutional prerequisites to support a common currency. A case in point is Africa where several monetary integration initiatives are under consideration, but their feasibility has been questioned repeatedly on the basis of Mundell’s (1961) Optimum Currency Areas theory.1 A key objective of the proposed African monetary unions is to boost international trade.2 Indeed, following the seminal work of Rose (2000), the trade-generating effect of currency unions (CUs) has been well established empirically, notably for Africa (Masson and Pattillo, 2004 and Tsangarides et al., 2009). While joining a CU represents a more credible commitment to maintaining exchange rate stability, it may also entail higher economic and institutional costs before and after the CU formation. Further, as is evident from the recent global financial crisis, not abiding with the institutional prerequisites could have destabilizing effects in the face of shocks not only for the country in question, but for the entire currency union. A pertinent question therefore is whether a suitable alternative exists for Africa—one that promotes trade through lower transaction costs, exchange rate volatility and uncertainty, but retains some flexibility and places fewer demands for policy coordination—such as pegging to an anchor currency. This paper empirically investigates the viability of conventional pegs as a possible choice to enhance bilateral trade for Africa by comparing their effect with that of CUs. While previous studies, for example, Klein and Shambaugh, 2006, Adam and Cobham, 2007 and Qureshi and Tsangarides, 2010, show that pegs are significantly more pro-trade than flexible arrangements, we extend the analysis to examine Africa, and focus explicitly on the relative importance of hard (CUs) versus conventional (soft) pegs for the region. To this end, we use a novel dataset of International Monetary Fund’s (IMF) exchange rate regime classification, which provides information on both de jure and de facto exchange rate classifications for the past three decades, to account for possible discrepancies between the officially announced and practically followed regimes, and their potentially different macroeconomic implications.3 Further, our empirical analysis addresses some important econometric concerns—particularly, those pertaining to the treatment of omitted variables in bilateral trade models—raised in previous literature in the context of CUs and trade. Specifically, applying recent developments in the estimation of bilateral trade flow models, we put forward quantitative estimates obtained through a range of estimation methods including controlling for dyadic fixed effects (with and without time-varying country specific effects), and the Hausman Taylor approach, which permits the estimation of time-invariant variables. Our findings based on a sample of 159 countries over 1972–2006 suggest that both hard and soft pegs increase trade for Africa vis-à-vis more flexible exchange rate arrangements, and that this effect is almost twice as large than for an average country in the world sample. Importantly, the effect of conventional pegs for the region appears to be at least as large as CUs. In addition, CUs and pegs appear to have an effect over and above that of exchange rate volatility indicating that other factors associated with more stable exchange rate regimes such as lower transactions costs and uncertainty also play a significant role in promoting trade. There is also some evidence of an indirect effect of pegging with an anchor currency—typically realized through the stabilization of exchange rate against other currencies pegged to the same anchor—pointing to both direct and indirect bilateral trade gains achieved from pegging for Africa. These results are robust to a variety of specifications, estimation methods, and variable definitions. In what follows, Section 2 reviews monetary arrangements in Africa and summarizes relevant literature. Section 3 outlines the empirical strategy adopted in the paper, and discusses relevant estimation issues. Section 4 describes the data. Section 5 presents the estimation results and the sensitivity analysis. Section 6 concludes.

This paper empirically examines the effect of monetary unions vis-à-vis conventional peg regimes on Africa’s bilateral trade using both de jure and de facto classifications over 1972–2006. Our analysis, based on an augmented version of the gravity model, shows that currency unions, direct pegs and reduced exchange rate volatility have a strong impact on Africa’s trade, which is almost twice as large as for an average country in the world sample. In addition, we find that the trade-generating effect of direct pegs for the region is at least as large as CUs, and that there is some evidence of beneficial indirect gains achieved through pegging for the region as well. Our findings suggest that in the context of enhancing trade, African countries stand to benefit substantially from the adoption of fixed exchange rate regimes. These benefits, however, highlight the important trade-offs in the choice of exchange rate regimes—for example, while Ghosh, Ostry, and Tsangarides (2010) find that less flexible exchange rate regimes help countries to anchor inflation expectations, sustain output growth, and foster deeper economic integration, they also find that less flexibility may also increase vulnerability to crisis, and impede external adjustment. In addition, pegged regimes are associated with significant constraints on policy activism (both fiscal and monetary), suggesting that the additional policy discipline required to sustain the peg may be achieved at the cost of a reduced ability to offset shocks via other policy tools which may have significant welfare implications (see, e.g., Masson, 2008). Against this background, a country should choose the regime best suited to address its particular economic challenges. From a policy perspective, however, the positive and relatively large effect of direct pegs for Africa may have important implications for the ongoing debates on regional currency union formation, a subject that is at the forefront of economic policy agendas across Africa. Viewed in the context of the policy option to choose hard or soft pegs, countries aspiring to expand cross-border trade activity through more stable exchange rate regimes while retaining some flexibility, could consider pegs as a viable alternative to complete monetary integration.