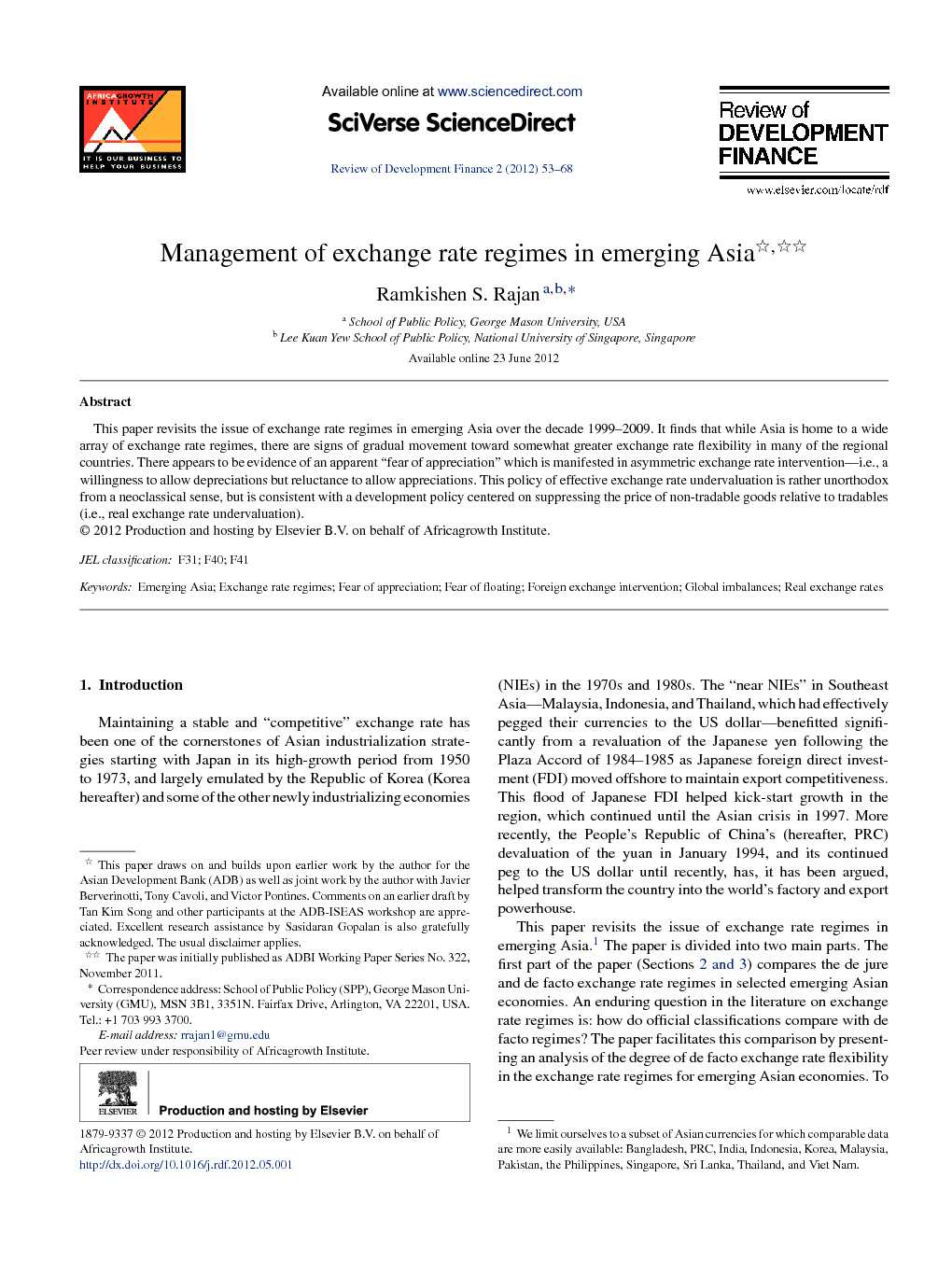 Maintaining a stable and “competitive” exchange rate has been one of the cornerstones of Asian industrialization strategies starting with Japan in its high-growth period from 1950 to 1973, and largely emulated by the Republic of Korea (Korea hereafter) and some of the other newly industrializing economies (NIEs) in the 1970s and 1980s. The “near NIEs” in Southeast Asia—Malaysia, Indonesia, and Thailand, which had effectively pegged their currencies to the US dollar—benefitted significantly from a revaluation of the Japanese yen following the Plaza Accord of 1984–1985 as Japanese foreign direct investment (FDI) moved offshore to maintain export competitiveness. This flood of Japanese FDI helped kick-start growth in the region, which continued until the Asian crisis in 1997. More recently, the People's Republic of China's (hereafter, PRC) devaluation of the yuan in January 1994, and its continued peg to the US dollar until recently, has, it has been argued, helped transform the country into the world's factory and export powerhouse. This paper revisits the issue of exchange rate regimes in emerging Asia.1 The paper is divided into two main parts. The first part of the paper (Sections 2 and 3) compares the de jure and de facto exchange rate regimes in selected emerging Asian economies. An enduring question in the literature on exchange rate regimes is: how do official classifications compare with de facto regimes? The paper facilitates this comparison by presenting an analysis of the degree of de facto exchange rate flexibility in the exchange rate regimes for emerging Asian economies. To preview the main conclusion, it is evident that Asia is home to a wide array of exchange rate regimes, though there are signs of a gradual movement toward somewhat greater exchange rate flexibility in many of the regional countries. Nonetheless, the propensity for foreign exchange intervention and exchange rate management among regional central banks remains fairly high in many instances, particularly in terms of managing against a currency basket (i.e., maintaining a stable nominal effective exchange rate, or NEER). However, beyond a general reluctance of many Asian economies to allow for a “benign neglect” of their currencies both in terms of managing volatility as well as in terms of “leaning against the wind,” the sustained stockpiling of reserves in developing and emerging Asian economies since 2000 (interrupted only briefly by the global financial crisis) suggests that they are more sensitive to exchange rate appreciations than to depreciations. This is the focus of the second part of the paper (Sections 4 and 5). Section 4 empirically explores the particular issue of this asymmetry in exchange rate intervention in developing and emerging Asia. We find there to be evidence of an evolution of Asian exchange rate policy towards an apparent “fear of floating in reverse” or “fear of appreciation” (Levy-Yeyati and Sturzenegger, 2007). This policy of exchange rate undervaluation is rather unorthodox, and at odds with most neoclassical/mainstream wisdom, which likely would recommend that policymakers aim to keep the real exchange rate (RER) as close as possible to its equilibrium level, as any sort of misalignment could in theory create macroeconomic disruptions. Specifically, according to conventional wisdom, RER overvaluation stifles economic growth and export competitiveness while persistent undervaluation leads to inflationary concerns. Section 5 reconsiders the PRC's and East Asia's unorthodox development, which has been centered on suppressing the price of non-tradable goods relative to tradables (RER undervaluation). The final section concludes with a few observations on Asian currency management in light of the global financial crisis and concerns about global imbalances.

This paper has examined the de facto exchange rate regimes in emerging Asia. There is some evidence indicating a greater degree of exchange rate flexibility in the regional economies. However, there is still a high level of fixity to the US dollar regardless of the de jure exchange rate regime. Levy-Yeyati and Sturzenegger (2007) conjectured that exchange rate policies have evolved toward an apparent “fear of floating in reverse” or “fear of appreciation,” whereby interventions have been aimed at limiting appreciations rather than depreciations. Our results confirm the existence of an asymmetry in central bank foreign exchange intervention responses to currency appreciations versus depreciations in many developing and emerging Asian economies, particularly in the case of nominal effective exchange rates (NEERs). This in turn rationalizes the relative exchange rate stability as well as the sustained reserve accumulation in the region.45 The paper went on to explore how real exchange rate undervaluation in much of East Asia led to sectoral reallocation of resources, which may in turn have helped transform them into industrial and export powers. In the scenario outlined in this paper, if there are positive externalities from producing tradables, which might also benefit the non-tradables sector,46 it is plausible that the country is able to produce and consume more of both tradables and nontradables simultaneously. While the country would still need to curb domestic demand if it desires to run a trade surplus, we have shown that it could still be in a welfare-enhancing position compared to the case where the markets were able to operate freely. This seems to be a plausible growth story for East Asia and PRC. Of course, these policies have also contributed to external imbalances with the US as well as globally. However, from the PRC's perspective, why would it consider changing its policy stance now if this undervalued RER-based development strategy has indeed been so successful? The dynamic growth story based on externalities from producing more tradables as outlined above is unlikely to be valid forever. It is generally believed that the productivity of the tradables sector will outpace that of non-tradables and real wages will have to start rising over time as the country develops. The PRC has clearly been feeling intense price pressures in recent times.47 Indeed, a number of commentators have expressed concerns that such large-scale intervention runs a serious risk of generating increases in inflation in the intervening countries, and some have even suggested that such reserve accumulations have played a major role in the creation of excessive global liquidity. Key to such issues is the extent to which monetary authorities can successfully sterilize the domestic monetary effects of reserve accumulation. Most monetary models of the exchange rate and balance of payments assume no sterilization so that large reserve accumulations would automatically lead to rapid growth in domestic money and credit. Sufficiently high levels of international capital mobility would make effective sterilization impossible, no matter the intensity of efforts of the domestic monetary authorities. Ouyang et al. (2010) and Ouyang and Rajan (2008) analyzed these issues for the PRC and India, respectively (pre-global financial crisis), and found that both countries had been able to effectively sterilize a high proportion of their recent reserve increases. If, however, the reserve build-up persists unabated and the fiscal costs of sterilization begin to escalate (Calvo, 1991), it is unlikely that the regional monetary authorities can persist with aggressive sterilization on such a huge scale.48 In such a situation domestic macroeconomic stability could be compromised. However, this effective undervaluation of the currency and the consequent bias toward external demand as opposed to domestic consumption may need to be reconsidered, particularly in view of the decline that is likely to occur in the trend growth in the US and rest of the industrialized world over the medium-term. A more sustainable strategy would be to allow its RER to appreciate somewhat and reorient production and consumption toward non-tradables. If so, the PRC's undervaluation policy and its hitherto export-led growth paradigm may have reached its limits. Further yuan revaluation along with expansion of domestic demand is likely necessary going forward. With regard to the latter, substantial increases in domestic demand in the PRC would require domestic structural reforms, including removing domestic cost distortions, upgrading domestic financial markets and safety nets, as well as reducing retained earnings of firms.49 With regard to the former, the announcement by the PRC on 19 June 2010 that it will abandon its currency peg to the dollar and manage the yuan more flexibly against a currency basket should be viewed in this context.50 What does a more flexible (and presumably stronger yuan) imply for the rest of Asia? The dynamics between the PRC's real exchange rate and the rest of the region is complex. For instance, while it is commonly believed that a real exchange rate appreciation of the yuan would benefit some other Asian economies with broadly similar comparative advantage (e.g., India and Viet Nam), allowing them to gain global market share, it could also hurt others in the region as the PRC's imports from the region might decline as production networks between the PRC and Southeast Asia move elsewhere (Garcia-Herrero and Koivu, 2009). Regardless of whether the PRC's exports are a substitute or complement to other Asian economies, there appears to be a prisoner's dilemma with regard to exchange rate policies in Asia, which in turn implies that there may be potential benefits from pursuing a more coordinated approach to dealing with monetary and exchange rate policies in the region.51 Certainly, coordination does not imply straight-jacketing all countries in the region to a common exchange rate regime. More specifically, rather than adopting a single currency immediately, Asian economies might gradually move toward pegging to a currency basket—starting with individual currency weights and varying extents of flexibility around the pegs with a gradual convergence over time.