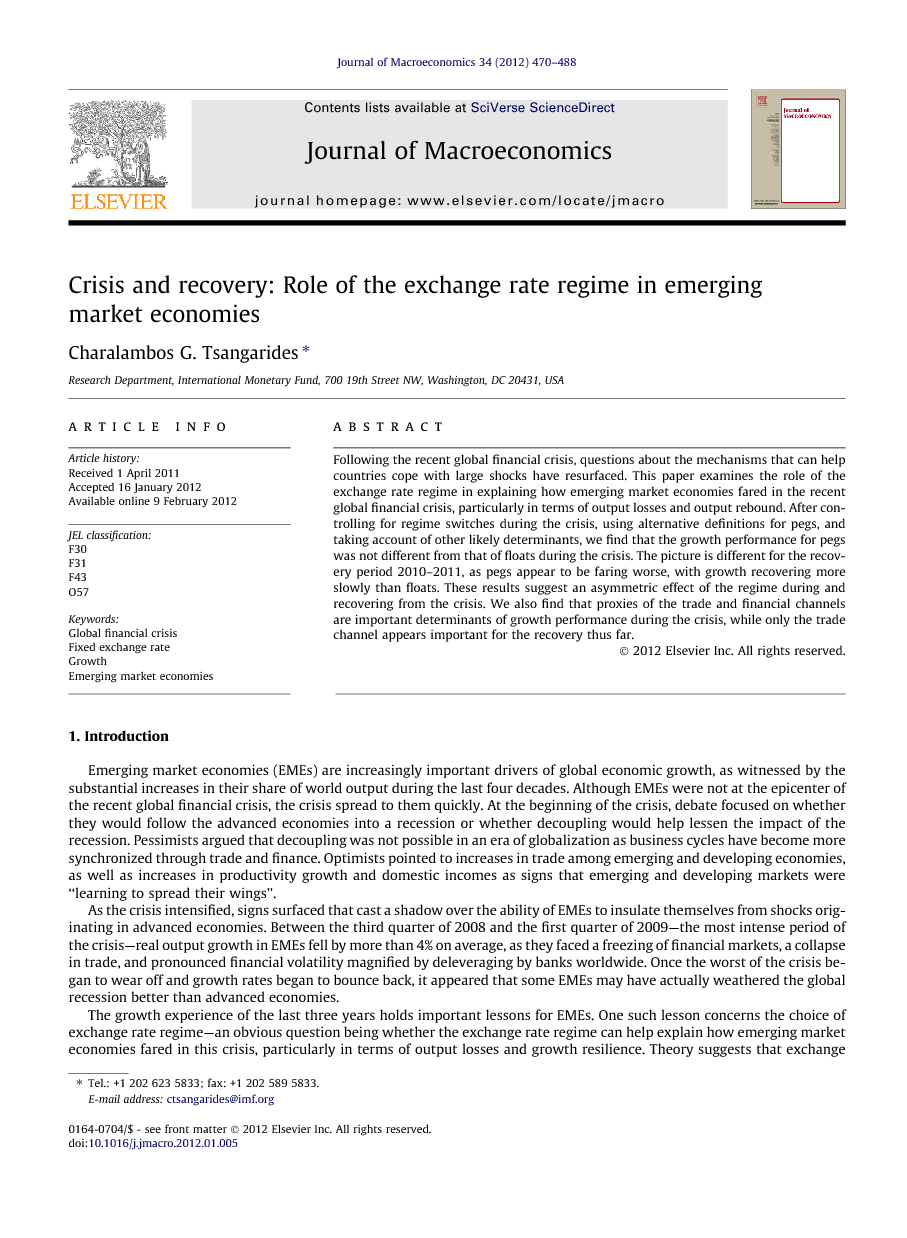 Following the recent global financial crisis, questions about the mechanisms that can help countries cope with large shocks have resurfaced. This paper examines the role of the exchange rate regime in explaining how emerging market economies fared in the recent global financial crisis, particularly in terms of output losses and output rebound. After controlling for regime switches during the crisis, using alternative definitions for pegs, and taking account of other likely determinants, we find that the growth performance for pegs was not different from that of floats during the crisis. The picture is different for the recovery period 2010–2011, as pegs appear to be faring worse, with growth recovering more slowly than floats. These results suggest an asymmetric effect of the regime during and recovering from the crisis. We also find that proxies of the trade and financial channels are important determinants of growth performance during the crisis, while only the trade channel appears important for the recovery thus far.

Following the recent experience of the global financial crisis, questions about the mechanisms that can help countries cope with large shocks have resurfaced. The main arguments evoked to explain differences in output losses or resilience during the crisis include initial conditions, the macroeconomic environment, global linkages and specific policy actions. This paper contributes to this discussion by assessing the role of the exchange rate regime in explaining how emerging market economies fared in, and are recovering from, the recent global financial crisis. Despite the limitations inherent in using a dataset with a small cross section, the paper presents some robust evidence about the growth experience of pegs for both the crisis and recovery periods. The overall results suggest that the trade channel matters most for the growth performance in EMEs during both the crisis and recovery periods, suggesting the important role of demand side factors in explaining the global crisis and the recovery from it. In addition, the important role of the financial channel is consistent with the general notion that the global financial shocks triggered the crisis. Our most important finding—which is perhaps contrary to the popular perception—is that the choice of the exchange rate regime was not an important determinant of growth performance during the crisis period. However, for the recovery period 2010–202011, countries with pegged regimes appear to be faring worse than those with floats. Taken together, these results suggest an asymmetric effect of the exchange rate regime during the crisis compared to the recovery from the crisis.