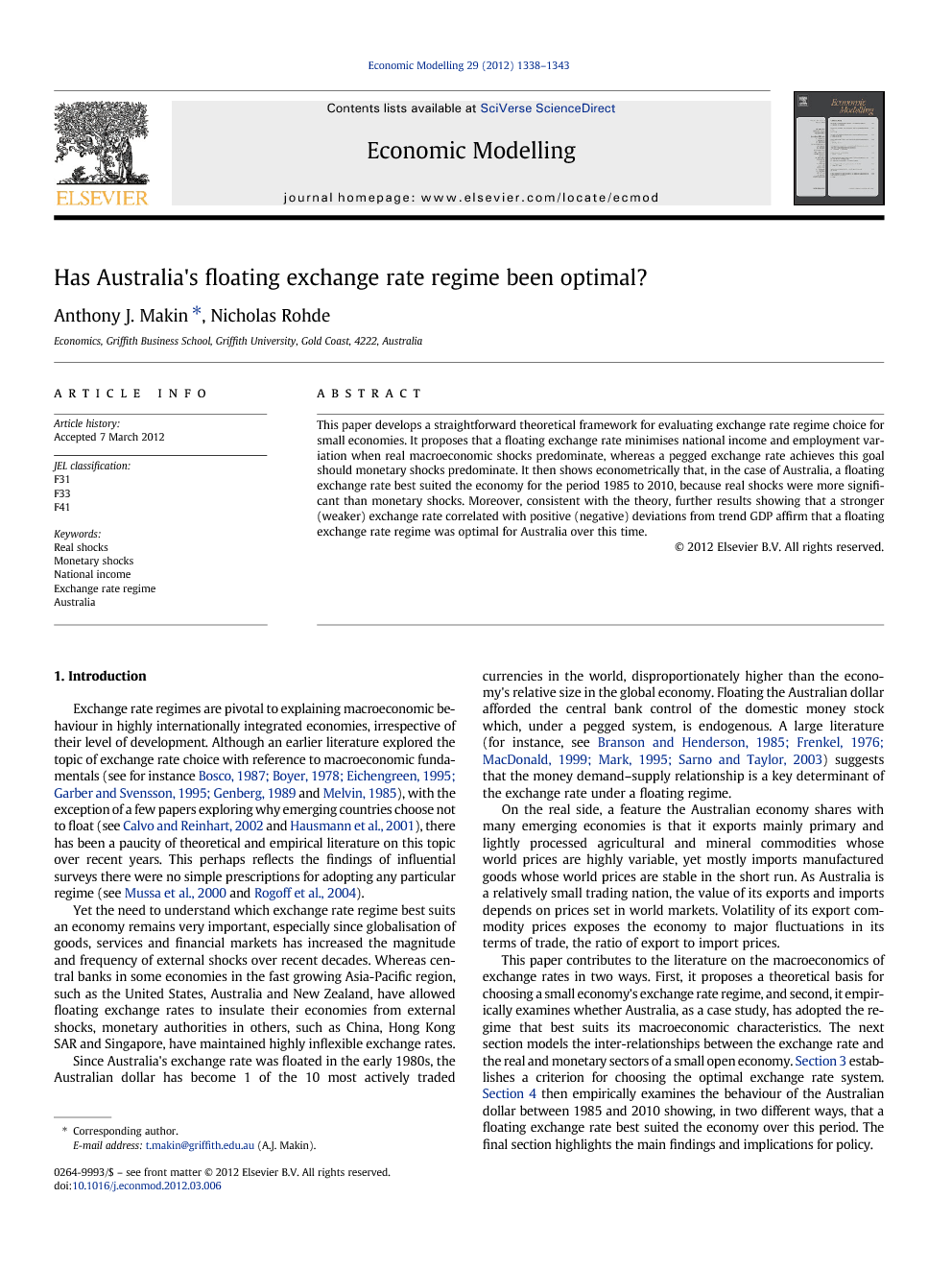 Exchange rate regimes are pivotal to explaining macroeconomic behaviour in highly internationally integrated economies, irrespective of their level of development. Although an earlier literature explored the topic of exchange rate choice with reference to macroeconomic fundamentals (see for instance Bosco, 1987, Boyer, 1978, Eichengreen, 1995, Garber and Svensson, 1995 and Genberg, 1989 and Melvin, 1985), with the exception of a few papers exploring why emerging countries choose not to float (see Calvo and Reinhart, 2002 and Hausmann et al., 2001), there has been a paucity of theoretical and empirical literature on this topic over recent years. This perhaps reflects the findings of influential surveys there were no simple prescriptions for adopting any particular regime (see Mussa et al., 2000 and Rogoff et al., 2004). Yet the need to understand which exchange rate regime best suits an economy remains very important, especially since globalisation of goods, services and financial markets has increased the magnitude and frequency of external shocks over recent decades. Whereas central banks in some economies in the fast growing Asia-Pacific region, such as the United States, Australia and New Zealand, have allowed floating exchange rates to insulate their economies from external shocks, monetary authorities in others, such as China, Hong Kong SAR and Singapore, have maintained highly inflexible exchange rates. Since Australia's exchange rate was floated in the early 1980s, the Australian dollar has become 1 of the 10 most actively traded currencies in the world, disproportionately higher than the economy's relative size in the global economy. Floating the Australian dollar afforded the central bank control of the domestic money stock which, under a pegged system, is endogenous. A large literature (for instance, see Branson and Henderson, 1985, Frenkel, 1976, MacDonald, 1999, Mark, 1995 and Sarno and Taylor, 2003) suggests that the money demand–supply relationship is a key determinant of the exchange rate under a floating regime. On the real side, a feature the Australian economy shares with many emerging economies is that it exports mainly primary and lightly processed agricultural and mineral commodities whose world prices are highly variable, yet mostly imports manufactured goods whose world prices are stable in the short run. As Australia is a relatively small trading nation, the value of its exports and imports depends on prices set in world markets. Volatility of its export commodity prices exposes the economy to major fluctuations in its terms of trade, the ratio of export to import prices. This paper contributes to the literature on the macroeconomics of exchange rates in two ways. First, it proposes a theoretical basis for choosing a small economy's exchange rate regime, and second, it empirically examines whether Australia, as a case study, has adopted the regime that best suits its macroeconomic characteristics. The next section models the inter-relationships between the exchange rate and the real and monetary sectors of a small open economy. Section 3 establishes a criterion for choosing the optimal exchange rate system. Section 4 then empirically examines the behaviour of the Australian dollar between 1985 and 2010 showing, in two different ways, that a floating exchange rate best suited the economy over this period. The final section highlights the main findings and implications for policy.

Despite the key role that exchange rate arrangements play in determining the effectiveness of monetary and fiscal policy, a consensus has yet to emerge on a theoretical framework for evaluating how particular exchange rate regimes should be chosen by governments with reference to their economies’ macroeconomic characteristics. This paper contributes to understanding of this important issue by advancing a simple international macroeconomic framework for facilitating exchange rate regime choice for small economies facing real and monetary shocks. It contends that if an economy is characteristically more prone to real shocks than monetary shocks, a floating exchange rate best minimizes its national income and hence employment variation, whereas a fixed exchange rate achieves this should monetary shocks be more significant than real ones. With reference to the Australian experience, the econometric results showed that Australia's independently floating exchange rate regime between 1985 and 2010 was optimal in light of the theory.