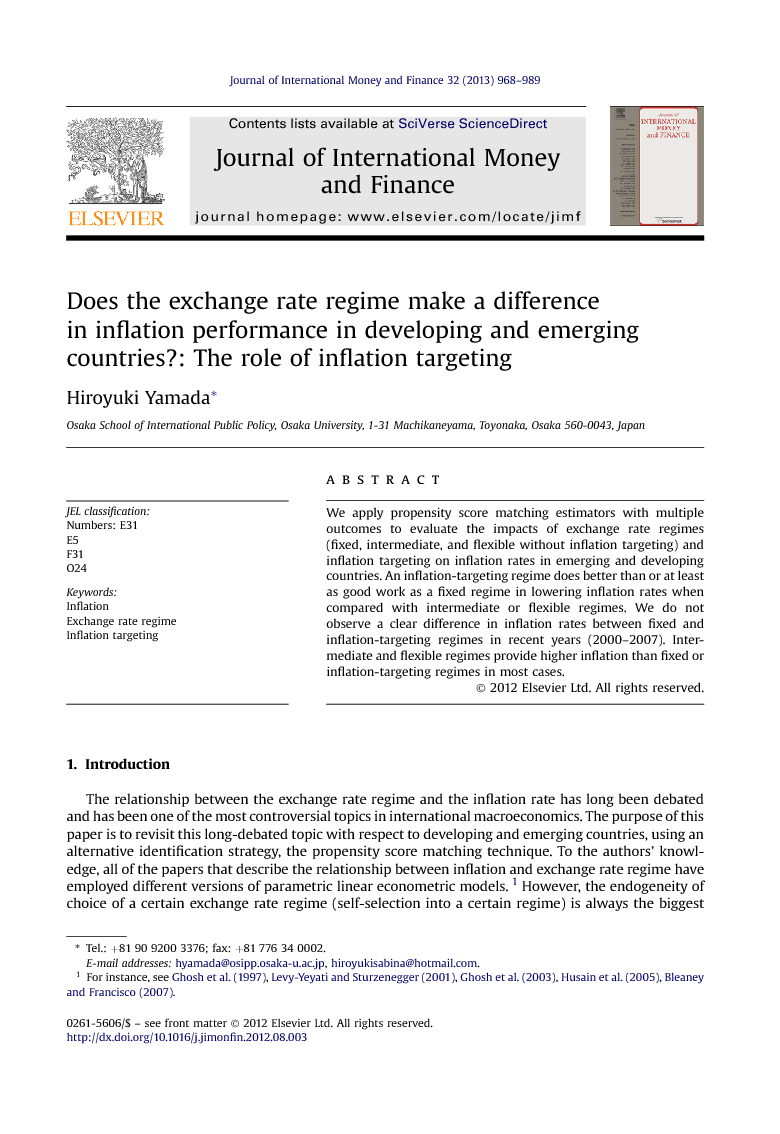 The relationship between the exchange rate regime and the inflation rate has long been debated and has been one of the most controversial topics in international macroeconomics. The purpose of this paper is to revisit this long-debated topic with respect to developing and emerging countries, using an alternative identification strategy, the propensity score matching technique. To the authors' knowledge, all of the papers that describe the relationship between inflation and exchange rate regime have employed different versions of parametric linear econometric models. 1 However, the endogeneity of choice of a certain exchange rate regime (self-selection into a certain regime) is always the biggest concern, and econometric models based on linearity have revealed their limitations. Moreover, it is not so straightforward to interpret the estimated “effects” in the literature because the comparison group is not clearly defined. Recently, some papers have studied treatment effects of inflation targeting (IT) on inflation. Lin and Ye (2009) and de Mendonça and de Guimarães e Souza (2012) find, on average, that inflation targeting has large and significant effects on lowering inflation in developing and emerging countries. However, in the literature, the relationship between exchange rate regime and IT is not well addressed. Indeed, the group that was compared to IT countries included countries with various types of exchange rate regimes, ignoring, for the most part, the past literature on the relationship between the exchange rate regime and the inflation rate. To fill the gap between the study of the effect of the exchange rate regime and that of IT on inflation, we extend a simple propensity score matching estimator for the binary outcomes to one with multiple outcomes, following Imbens (2000) and Lechner (2002).2 We need this extension because the choice of a certain exchange rate regime is not simply binary. Even under a relatively crude classification, there are three regimes: fixed, intermediate, and flexible. Furthermore, we differentiate inflation-targeting countries as a distinct regime. Under the standard exchange rate classification, which we will show, almost all of the IT countries are classified as flexible regimes, and a few countries are classified as intermediate. No IT countries are classified as fixed regimes. Although these four categories (fixed, intermediate, flexible, and IT) are still crude, we use them as the choice alternatives in the “exchange rate” regimes because of the issue of sample size. Compared with the linearity approaches in the literature, the estimated “effects” in our approach have clearer meanings because of the clearer definitions of the treatment and comparison groups at the expense of some other aspects in time-series analyses. In fact, we can answer the following questions using our approach: (1) “What is the average reduction or increase in the inflation rate by switching from one regime to another for one drawn randomly from the population?” and (2) “What is the average causal effect on the inflation rate for a country that actually selects a certain exchange rate regime relative to another regime?” In the usual linearity approaches, it is difficult to answer these questions because comparison groups are not well defined under the self-selection mechanism. In the literature, the former is called the average treatment effect (ATE), whereas the latter is called the treatment effect on the treated (TT). By differentiating the exchange rate regimes into four groups, the meanings of the estimated “effects” are further clarified compared with the existing literature on the impact of inflation targeting on inflation using propensity score matching with binary outcomes (Lin and Ye, 2009; and de Mendonça and de Guimarães e Souza, 2012). Although in general, comparing our results with those reported earlier in the literature on exchange rate regimes is difficult because of the definition of “effect” and comparison groups, we observe a similar advantage of the fixed exchange regime. Compared to the literature on IT, we confirm that the IT regime works well in lowering inflation rates: the IT regime does better than or is at least as good as fixed regimes in lowering the inflation rate. However, as we observe below, there has been no visible difference in inflation rates between fixed and IT regimes in recent years (2000–2007). This might be because a credible fixed exchange rate regime has an implicit inflation target equal to the inflation target in the country to which the currency is pegged. If there were a systematic inflation differential, the fixed exchange rate would not (except in the presence of permanent shocks affecting equilibrium real exchange rates) be credible. If this is what we find in this paper, there is no reason why one should expect a difference between countries that explicitly target inflation and countries with a fixed exchange rate except for differences in the inflation target. These results might imply that for emerging and developing countries, some type of nominal anchor (in our context, either a fixed or IT regime) works to control inflation at a manageable level. However, in both cases commitments and institutional structure are important for implementing these regimes and making them credible (and this is why we have to pay attention to the self-selection mechanism in the choice of exchange rate regimes). Mishkin (1999) states that transparency and accountability are crucial to constraining discretionary monetary policy in order to produce desirable long-run outcomes.3 The rest of this paper is organized as follows. Section 2 explores the classification of the exchange rate regimes and the list of IT countries, while Section 3 briefly explains the propensity score matching estimators with multiple outcomes. In Section 4, the data are explained, and the estimation results of multinomial logit (MNL) for propensity scores are presented. Section 5 reports the estimation results of the propensity score matching. Section 6 reports the results of the matching estimators while restricting the sample to 2000–2007 periods. Section 7 provides robustness checks, and the conclusion is presented in Section 8.

The main purpose of this paper was to fill the gap between the study of the effect of the exchange rate regime and the study of the effect of IT on inflation, taking into account self-selection in a certain exchange rate regime. We used a counterfactual analysis (propensity score matching with multiple outcomes) to check the robustness of the findings presented in earlier studies. Although, comparing our results with those reported earlier in the literature on exchange rate regimes was difficult because of the definition of “effects” and comparison groups, we observed a similar advantage of the fixed exchange regime. Compared to the literature on IT, we confirm that an IT regime works well in lowering inflation rates: an IT regime does better than or at least as well as a fixed regime at maintaining inflation rates. We did not observe clear and statistically significant differences in inflation rates between fixed and IT regimes in either TT or ATE. These results might imply that for emerging and developing countries, some type of nominal anchor (in our context, either a fixed regime or IT regime) might work to control inflation at a manageable level. However, good commitments and institutional structure are undeniably important for implementing these regimes and making them credible as discussed in numerous studies. This means simply selecting either a fixed exchange rate regime or IT regime would not imply a reduction in inflation. However, the results must be interpreted with caution. First, the classification of exchange rate regimes, which impacts the results of this type of analysis, is subject to eternal debate. To minimize this concern, we provide several robustness checks under the IMF classification. It is worth noting that there is no overlap of year-country observations between fixed and IT regimes, which means that these two categories are totally distinct from each other, and results comparing these two regimes are more reliable than those comparing any other combination of two regimes. Second, although we believe that our identification approach is superior to that found in the past literature on exchange rate regimes in terms of constructing the comparison groups, the use of a matching approach leaves out detailed treatments of time-series data dimensions. Thus, the findings of this study should not be viewed as a replacement but rather as complementary to those observed in earlier studies.