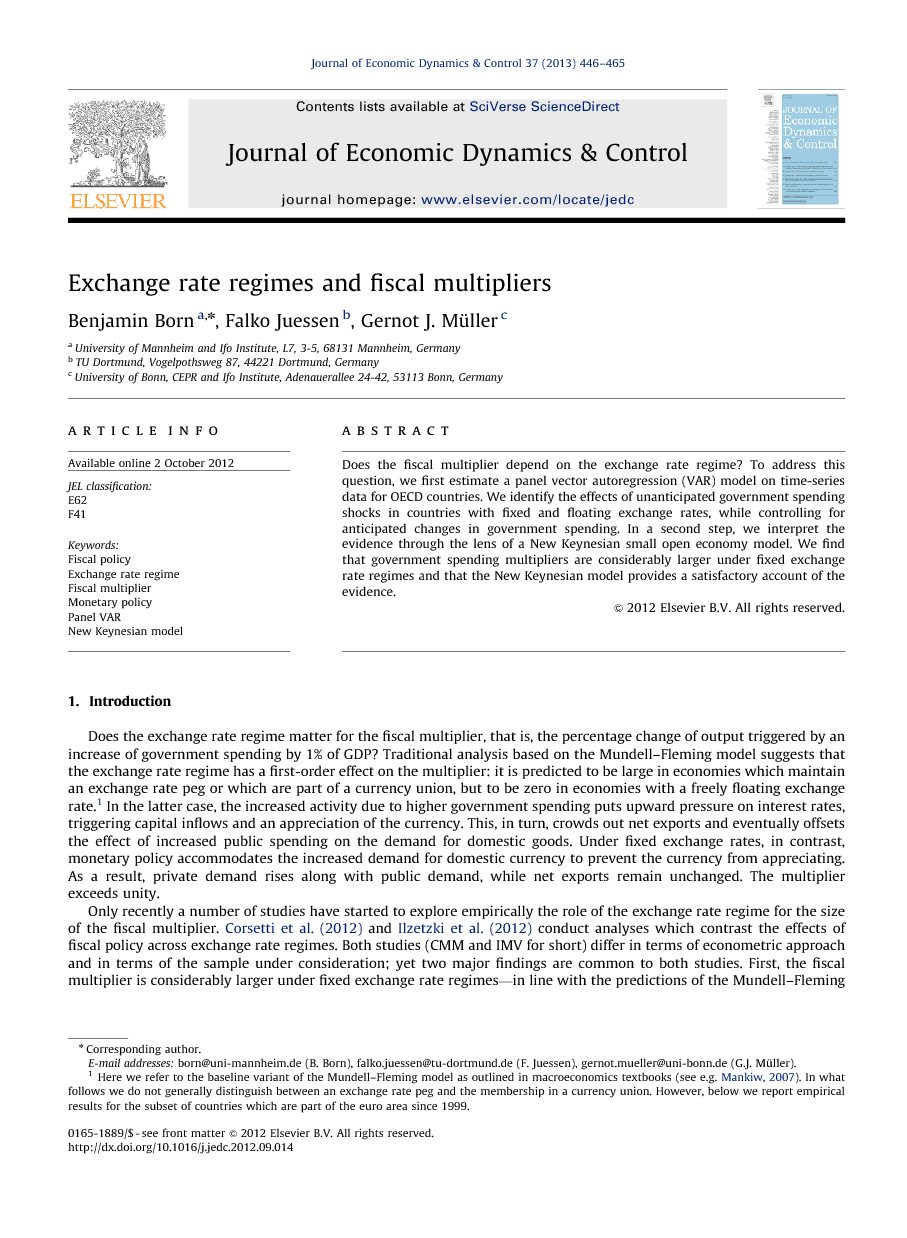 Does the fiscal multiplier depend on the exchange rate regime? To address this question, we first estimate a panel vector autoregression (VAR) model on time-series data for OECD countries. We identify the effects of unanticipated government spending shocks in countries with fixed and floating exchange rates, while controlling for anticipated changes in government spending. In a second step, we interpret the evidence through the lens of a New Keynesian small open economy model. We find that government spending multipliers are considerably larger under fixed exchange rate regimes and that the New Keynesian model provides a satisfactory account of the evidence.

Does the exchange rate regime matter for the fiscal multiplier, that is, the percentage change of output triggered by an increase of government spending by 1% of GDP? Traditional analysis based on the Mundell–Fleming model suggests that the exchange rate regime has a first-order effect on the multiplier: it is predicted to be large in economies which maintain an exchange rate peg or which are part of a currency union, but to be zero in economies with a freely floating exchange rate.1 In the latter case, the increased activity due to higher government spending puts upward pressure on interest rates, triggering capital inflows and an appreciation of the currency. This, in turn, crowds out net exports and eventually offsets the effect of increased public spending on the demand for domestic goods. Under fixed exchange rates, in contrast, monetary policy accommodates the increased demand for domestic currency to prevent the currency from appreciating. As a result, private demand rises along with public demand, while net exports remain unchanged. The multiplier exceeds unity. Only recently a number of studies have started to explore empirically the role of the exchange rate regime for the size of the fiscal multiplier. Corsetti et al. (2012) and Ilzetzki et al. (2012) conduct analyses which contrast the effects of fiscal policy across exchange rate regimes. Both studies (CMM and IMV for short) differ in terms of econometric approach and in terms of the sample under consideration; yet two major findings are common to both studies. First, the fiscal multiplier is considerably larger under fixed exchange rate regimes—in line with the predictions of the Mundell–Fleming model.2 Second, there is little evidence for government spending to appreciate the real exchange rate and to crowd out net exports under floating exchange rates—a puzzling finding from the perspective of the Mundell–Fleming model. Against this background the contribution of the present paper is twofold. First, we reassess the evidence regarding the role of the exchange rate regime for fiscal policy transmission. Relying on a unique data set for OECD countries, we address a major concern regarding time-series studies of the fiscal transmission mechanism: a possible misspecification of the timing of fiscal policy shocks due to anticipation effects or foresight (Ramey, 2011 and Leeper et al., 2012). Specifically, and in contrast to CMM and IMV, we control explicitly for anticipated changes of government spending while estimating the effects of unanticipated government spending shocks in a panel VAR model. It turns out that – in the context of our empirical analysis – results are quite robust with respect to controlling for anticipation effects; we confirm the main findings of CMM and IMV.3 As a second contribution, we investigate whether the time-series evidence can be rationalized on the basis of a New Keynesian small open economy model.4 We find that a small-scale variant of the model is able to account for the impulse response functions obtained from the panel VAR model. Specifically, while we calibrate the model to match the empirical impulse response functions obtained for countries with fixed exchange rates, we find that the model is also able to account for the VAR evidence under floating exchange rates.5 Given the empirical success of the model, we perform experiments to inspect the fiscal transmission mechanism in greater detail. In particular, we illustrate that the difference of the multiplier across exchange rate regimes is driven by differences in the monetary policy stance, as in the Mundell–Fleming model. Yet, in contrast to the predictions of the latter, these differences play out via an adjustment of the level of private expenditure rather than through a redirection of trade flows. Our analysis draws on earlier work by Corsetti et al. (2011) who show in detail how monetary policy determines the fiscal transmission mechanism under alternative exchange rate regimes. It is also related to a number of studies highlighting the role of real interest rates, and hence monetary policy, for the transmission of government spending shocks, including Bilbiie et al. (2008), Davig and Leeper (2011), and Coenen et al. (2012); a case of particular interest is the situation where monetary policy is constrained by the zero lower bound (see, e.g., Christiano et al., 2011 and Woodford, 2011).6 The remainder of the paper is organized as follows. The next section discusses our empirical framework and establishes evidence on the fiscal transmission mechanism across exchange rate regimes. Section 3 outlines a New Keynesian small open economy model, performs quantitative analyses, and interprets the time-series evidence through the lens of the model. Section 4 concludes.

The question of how strongly the fiscal multiplier depends on the exchange rate regime has a direct bearing on many policy issues. It has been recently taken up empirically by CMM and IMV as well. Our contribution is twofold. First, our empirical analysis is based on a panel VAR model, estimated separately on samples of countries with fixed and floating exchange rates. Importantly, and in contrast to CMM and IMV, our data set allows us to address concerns regarding the appropriate timing of the identified government spending shocks. Specifically, in identifying government spending surprise shocks, we are able to control for anticipated changes in government spending, at least over a horizon of six months. Eventually, however, it turns out that this has little bearing on our findings. In fact, we largely confirm those of CMM and IMV. Importantly, multiplier effects tend to be considerably larger under fixed exchange rate regimes. As a second contribution, we show that a fairly standard version of the New Keynesian small open economy model provides a satisfactory account of the time-series evidence. Importantly, the model is able to capture key features of the transmission mechanism under both exchange rate regimes—also from a quantitative point of view. Moreover, we illustrate that differences in the monetary stance across exchange rate regimes are driving the difference in the multiplier, as in the Mundell–Fleming model. However, these differences play out via an adjustment of the level of private expenditure rather than through a redirection of trade flows.