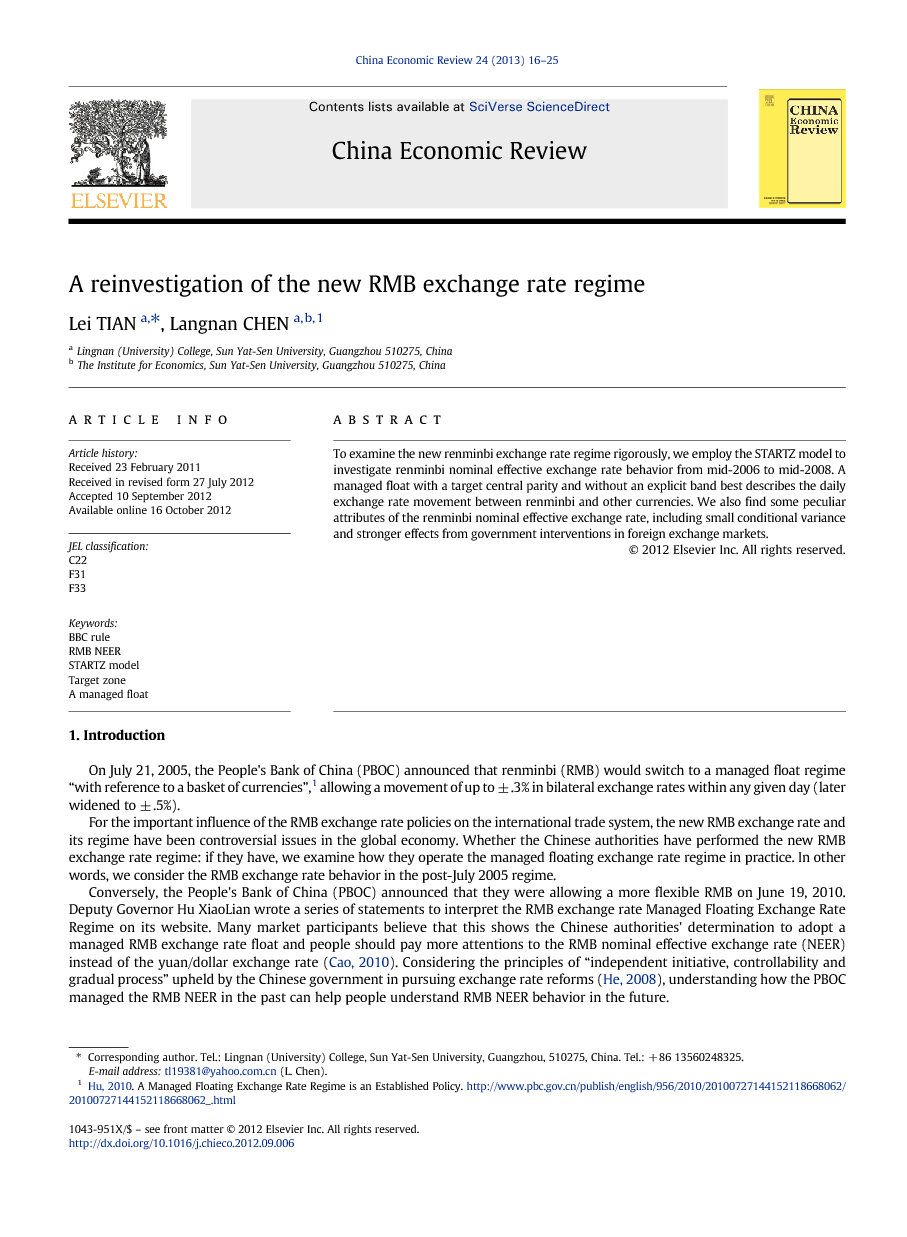 On July 21, 2005, the People's Bank of China (PBOC) announced that renminbi (RMB) would switch to a managed float regime “with reference to a basket of currencies”,1 allowing a movement of up to ± .3% in bilateral exchange rates within any given day (later widened to ± .5%). For the important influence of the RMB exchange rate policies on the international trade system, the new RMB exchange rate and its regime have been controversial issues in the global economy. Whether the Chinese authorities have performed the new RMB exchange rate regime: if they have, we examine how they operate the managed floating exchange rate regime in practice. In other words, we consider the RMB exchange rate behavior in the post-July 2005 regime. Conversely, the People's Bank of China (PBOC) announced that they were allowing a more flexible RMB on June 19, 2010. Deputy Governor Hu XiaoLian wrote a series of statements to interpret the RMB exchange rate Managed Floating Exchange Rate Regime on its website. Many market participants believe that this shows the Chinese authorities' determination to adopt a managed RMB exchange rate float and people should pay more attentions to the RMB nominal effective exchange rate (NEER) instead of the yuan/dollar exchange rate (Cao, 2010). Considering the principles of “independent initiative, controllability and gradual process” upheld by the Chinese government in pursuing exchange rate reforms (He, 2008), understanding how the PBOC managed the RMB NEER in the past can help people understand RMB NEER behavior in the future. Referring to the de facto RMB exchange rate regime after July 2005, conclusions in the literature are mixed. A common point for many papers is that the new RMB exchange rate regime is a variant of the “BBC” rule. Until now, few papers have exploited an econometric model based on the “BBC” or target zone theoretical models to verify this conjecture. This paper extends the literature in several dimensions. First, our study tries to utilize a suitable econometric model to explore this subject. We employ the STARTZ model proposed by Lundbergh and Terasvirta (2006) to examine the daily RMB exchange rate movements in the new regime. We find that a managed float with a target central parity and without an explicit band can describe the daily exchange rate movements between RMB and other currencies since July 2005. Our outcome empirically verifies the “BBC” hypothesis and gives a specific form for the RMB managed float regime. Second, we find new knowledge about RMB NEER behavior, which can be seen as typical features of developing foreign exchange markets. The intra-marginal interventions of the Chinese authorities affect the RMB exchange rate behavior more strongly, and the conditional variance of the exchange rate deviations has tiny values. These features are rooted in the immaturity of the RMB exchange market. Based on this knowledge, we offer the Chinese authorities some advice on managing the RMB exchange rate. Third, the sample data in our paper are from a new RMB NEER index, calculated and released by Fudan University in October 2010. The daily RMB composite index has some useful features, though few papers have utilized this index to investigate high frequency RMB NEER behavior. We introduce the Fudan RMB NEER briefly in Section 4. According to the dynamic classification of exchange rate regime by Bubula and Otker-Robe (2004), a tightly managed float includes the “BBC” rule, Wide Crawling Band and Target Zone. To extend the target zone policy developed by Williamson in the 1980s, he proposed the “BBC” rule in the 1990s as a target zone system for new developing countries. Krugman (1991) developed a basic model that describes exchange rate dynamics in a target zone. In the continuous time model, the exchange rate depends on some current fundamentals and expected changes of exchange rate, like any other asset price. The original model makes two crucial assumptions: the target zone is completely credible, and the authority only exploits marginal interventions to defend it. Under these assumptions, the existence of a pre-specified band makes the relationship between the exchange rate and fundamental a smooth S-curve instead of a linear curve produced in a free float. The non-linear relationship involves some important empirical implications in the Krugman model. First, the slope of the S-shaped curve is always less than one, which is sometimes called the “honeymoon” effect,2 as the exchange rate approaches the exchange rate band edges, its slope becomes smaller and the “honeymoon” effect is stronger. Second, the marginal exchange rate distribution is U-shaped, the conditional variance is a ∩-shape. Most empirical tests have rejected the original Krugman model, which has been extended by incorporating realignment risk and intra-marginal interventions. These extensions have received support from empirical studies to some extent.3 In a seminal paper (Svensson, 1992), Svensson demonstrated that, a honeymoon effect operates in a managed float regime without an explicit exchange rate band because of the mean-reverting interventions performed by the central bank, both a managed float with a target central parity and without an explicit band as well a target zone with intra-marginal interventions thus have similar nonlinearity features in exchange rate behavior. As a flexible target zone econometric model, the STARTZ model can characterize the dynamic exchange rate behavior implied by the original target zone model of Krugman (1991) and its modifications. Considering data availability and other limited situations (e.g., China still controls the free mobility of capital), we deem the STARTZ model, which only needs daily exchange rate data, to be the most practicable of the existing target zone econometric models. The remainder of the paper is organized as follows. Section 2 reviews the related literature, while Sections 3 introduces the STARTZ model briefly. In Section 4, we introduce the Fudan RMB index and show how we select the sample period. Section 5 presents the estimation results. Finally, Section 6 gives a conclusion and some suggestions.