Journal : Journal of International Money and Finance, Available online 30 May 2013 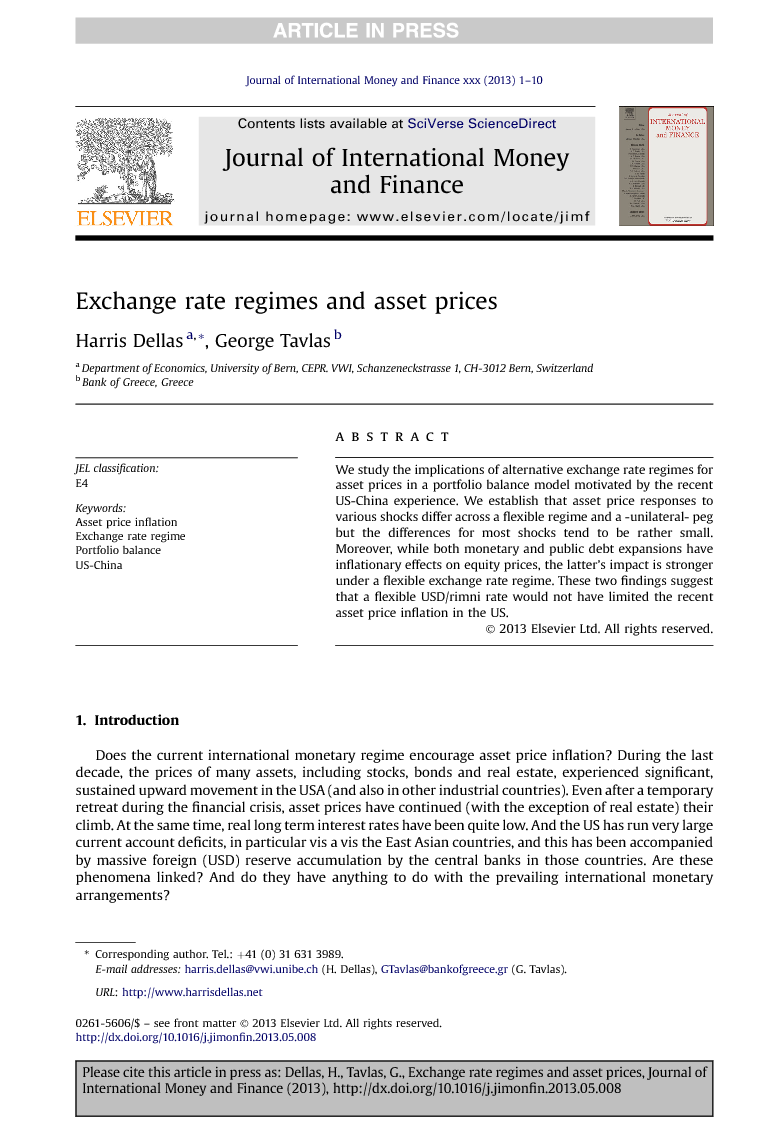 We study the implications of alternative exchange rate regimes for asset prices in a portfolio balance model motivated by the recent US-China experience. We establish that asset price responses to various shocks differ across a flexible regime and a -unilateral- peg but the differences for most shocks tend to be rather small. Moreover, while both monetary and public debt expansions have inflationary effects on equity prices, the latter's impact is stronger under a flexible exchange rate regime. These two findings suggest that a flexible USD/rimni rate would not have limited the recent asset price inflation in the US.

During the period leading to the recent financial crisis, a broad set of asset prices in the US increases significantly. At the same time, the US run large current account deficits, in particular against China, and a large share of these deficits was financed by the purchase of US safe assets (government and GSE bonds) by the Chinese monetary authorities. A possible explanation for the Chinese accumulation of safe, liquid US agents is China's desire to manage its USD/rimni exchange rate. The objective of this paper is to assess the contribution of this unilateral peg to asset price inflation in the US. To this purpose we have used a simple portfolio balance model with flexible prices. While the model lacks realistic business cycle features and has not been calibrated to these two countries, we think that the resulting analysis carries useful insights into the role of alternative exchange rate systems for asset price behavior, both at the general level and at the specific US-China experience. Our main finding is that all the key factors that have been identified in the literature as important contributors to the US asset price inflation (the relocation of labor in China towards the traded sector, an increase in the LDCs appetite for safe, liquid US assets, monetary and debt expansion in the US) do indeed have the predicted effects. Nonetheless, the management of the USD/rimni rate does not seem to have played a significant role in the response of US asset prices to the various domestic and international disturbances. A useful extension of the current paper would be to pursue a more quantitative route on the sources of asset price inflation as well as the contribution of the exchange rate regime by using a richer, properly calibrated model. It should be noted, though, that such a task faces considerable challenges because the Chinese economy is far away from its steady state and it is managed in a way that is not well captured by the neoclassical model (capital controls, under-employment, etc).