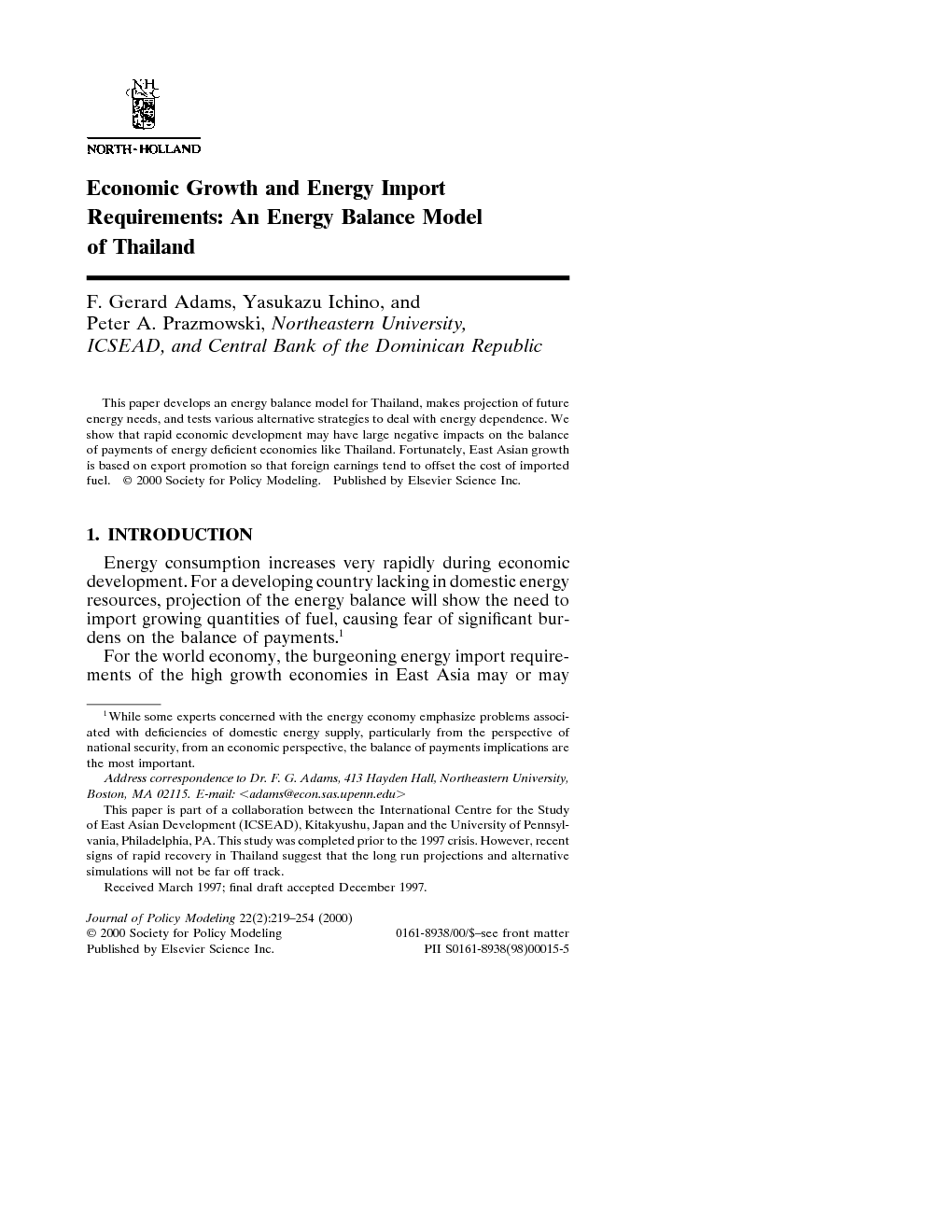 This paper develops an energy balance model for Thailand, makes projection of future energy needs, and tests various alternative strategies to deal with energy dependence. We show that rapid economic development may have large negative impacts on the balance of payments of energy deficient economies like Thailand. Fortunately, East Asian growth is based on export promotion so that foreign earnings tend to offset the cost of imported fuel.

Energy consumption increases very rapidly during economic development. For a developing country lacking in domestic energy resources, projection of the energy balance will show the need to import growing quantities of fuel, causing fear of significant burdens on the balance of payments.1 For the world economy, the burgeoning energy import requirements of the high growth economies in East Asia may or may not pose a challenge. This article considers the linkage between energy imports and economic development. Using an “energy balance” model of Thailand, we simulate the effects of growth, domestic resource expansion, and improvements in energy use efficiency on the growth of energy requirements. In this paper we develop an energy balance model for Thailand, make projection of future developments and test various alternative strategies to deal with energy dependence. We proceed as follows: Section 2 contains the theoretical structure of our model. Section 3 talks about model estimation and sample period solutions. Section 4 develops the forecast and alternative policy analyses. Section 5 draws conclusions. Thailand's economy is a good example of the link between energy demand and development. The energy needs and imports of oil of Thailand have grown very rapidly. Figure 1 shows the growth rate of GDP and total final consumption of energy for Thailand in the period 1972–93.On average, over the past 10 years (1984–93), GDP grew at an annual rate of 8.6 percent, and energy consumption grew at 10.3 percent, with an energy elasticity of 1.2 percent. The graph illustrates this relationship and also shows the sharp cyclical sensitivity of energy consumption and petroleum imports. This relationship, which is characteristic of a rapidly developing economy (Zilberfarb and Adams, 1981; and Adams and Chen, 1996) reflects increasing industrialization and rising living standards, particularly the rapid motorization observed in recent years. Thailand's energy balance for 1993, Table 1, in thousands of tons oil equivalent, illustrates sources and from uses of energy in Thailand. Thailand's energy use is dominated by the requirements of the transportation sector, whose consumption accounts for approximately half of total secondary energy use. Gasoline and diesel consumption has been growing at an annual rate of 8.9 percent from 1981 to 1993 (Table 2).There is limited domestic production of coal and hydro power. In recent years, the potential for natural gas production in the Gulf of Siam has been growing rapidly, and this fuel is going largely into generation of electrical power (Figure 2).Almost two-thirds of Thailand's primary energy is imported, mainly in the form of crude oil and petroleum products, which account, on average, for some 9 percent of the value of Thai total imports. As a consequence, the import balance, both in real and in foreign exchange terms, is greatly dependent on growth of energy consumption in Thailand and on international oil prices. Thailand is an importer of petroleum products, particularly heavy fuels. In the past decade, the growth of imports of residual fuel oil for electricity generation and heavy industrial use has slowed as increasing supplies of natural gas have been developed in the Gulf of Siam (Figure 2).

We can conclude that countries like Thailand that are energy deficient and that also are growing very rapidly will bear, ceteris paribus, a heavy energy import cost. Imports of energy grow with GDP and industrial production though, fortunately, not more rapidly than the growth of exports. This will be the case of Thailand. Additional domestic energy production or improvement efficiency can help somewhat to alleviate the tendency of imports of energy to expand with economic growth, but the impact of higher energy taxes, particularly on gasoline, is relatively small.