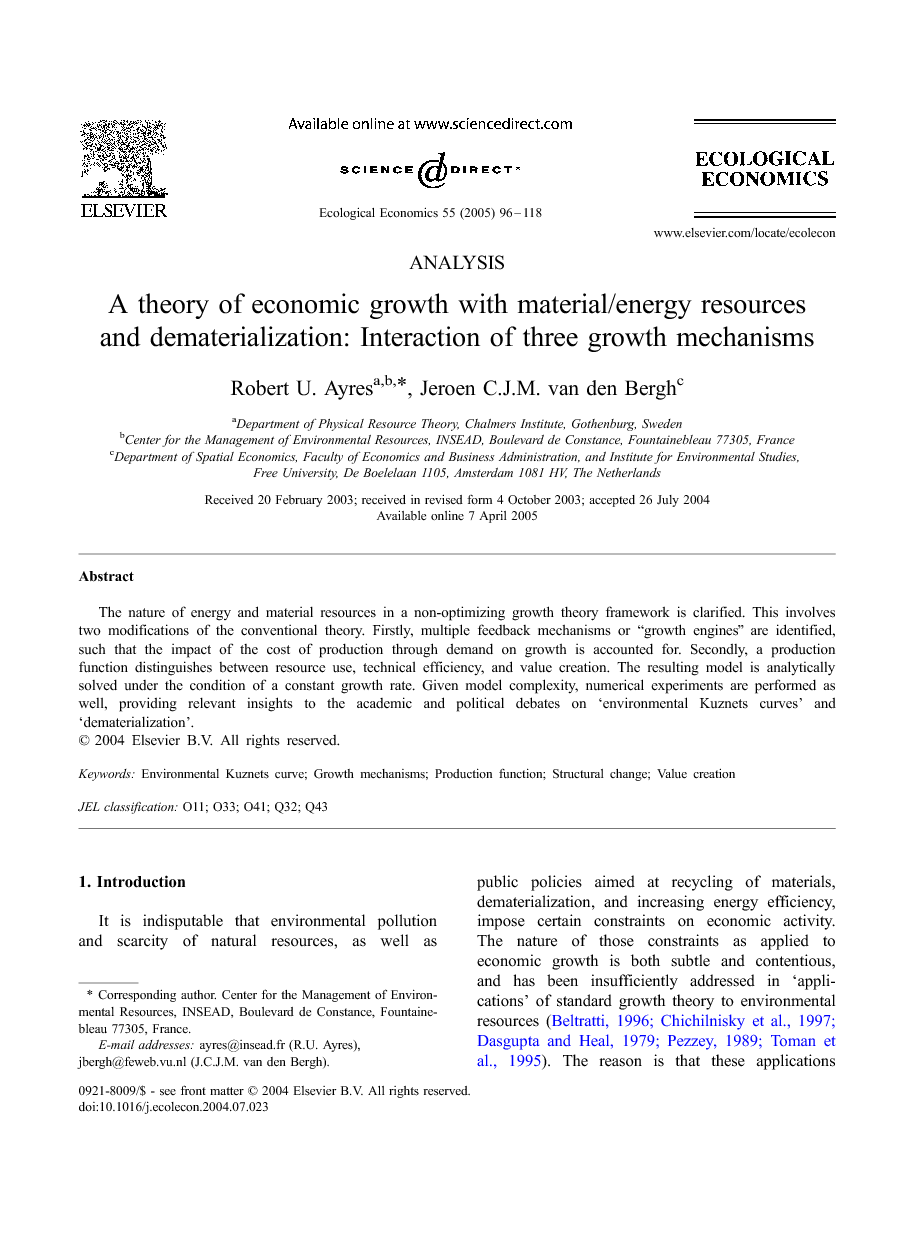 The nature of energy and material resources in a non-optimizing growth theory framework is clarified. This involves two modifications of the conventional theory. Firstly, multiple feedback mechanisms or “growth engines” are identified, such that the impact of the cost of production through demand on growth is accounted for. Secondly, a production function distinguishes between resource use, technical efficiency, and value creation. The resulting model is analytically solved under the condition of a constant growth rate. Given model complexity, numerical experiments are performed as well, providing relevant insights to the academic and political debates on ‘environmental Kuznets curves’ and ‘dematerialization.’

It is indisputable that environmental pollution and scarcity of natural resources, as well as public policies aimed at recycling of materials, dematerialization, and increasing energy efficiency, impose certain constraints on economic activity. The nature of those constraints as applied to economic growth is both subtle and contentious, and has been insufficiently addressed in ‘applications’ of standard growth theory to environmental resources (Beltratti, 1996, Chichilnisky et al., 1997, Dasgupta and Heal, 1979, Pezzey, 1989 and Toman et al., 1995). The reason is that these applications remain too abstract in the sense that the adopted model structure allows for multiple interpretations about what is changing in the economy and its physical structure. As a consequence, quantifying for empirical testing and modelling is virtually impossible. This in turn means that existing growth theory with environment and resources does not give rise to theoretical and empirical information that is useful in a debate on structural economic change aimed at reducing the use of energy and materials. An alternative approach to modelling growth with environment that meets the needs of information for current debates involves at least two modifications of the conventional theory. First, to explain the growth of output, be it in monetary (income) or physical terns, it must reflect the existence of self-reinforcing feedback mechanisms or ‘growth engines’ apart from population growth and the traditional savings–investment–capital accumulation mechanism. The knowledge-accumulation mechanism proposed by various versions of endogenous growth theory is one candidate, but not the only one. The role of learning and ‘experience,’ as well as the role of declining natural resource (notably fossil fuel) prices, as drivers of past and present economic growth needs to receive attention in formal models of economic growth. We refrain from using the term ‘endogenous growth’ because it is too much associated with a particular conception–different from the one here–of ‘growth engines.’ In particular, it is limited to models that assume–adopting the standard Neoclassical view–that firms always act rationally and that growth occurs in equilibrium. Note in this respect that an alternative approach, namely neo-Schumpeterian theories of growth, has emphasized bounded rationality and lock-in, which cause persistent economic disequilibria (Nelson and Winter, 1982 and Dosi et al., 1988). Our study, although not explicitly evolutionary, is more in the latter spirit. Second, a modified growth theory should explicitly reflect the fact that important (i.e., scarce) factors of production in economics can and do change over time. When non-renewable natural resources were perceived as available without limit (i.e., not scarce), they could be formally regarded as intermediate products of scarce labor and scarce produced capital.1 However, in the future, as growth continues, both renewable and non-renewable natural resources may become scarce and even limiting, whereas unskilled human labor and produced capital will be increasingly plentiful. This requires a model that explicitly reflects structural change. Such a model would differ from the models in the literature that extend traditional growth theory by including a natural resource or pollution flows and stocks (see Dasgupta and Heal, 1979 and Smulders, 1999). These ideas will be elaborated in a formal model of income growth that includes two major innovations relative to existing growth models. A general production function distinguishes between resource use, technical efficiency, and value creation. In addition, the impact of cost of production on demand and, in turn, on growth is included. The production and demand submodels render separate insights. The combination of the two leads to a complicated model; this will be solved under an extra condition, namely, that the growth rate is constant. The reason for this is not merely complexity, but the belief that optimal growth is not the only, and not even necessarily a relevant, issue to be dealt with in the realm of environment and growth. This is partly related to the aforementioned conception of growth as an out-of-equilibrium process resulting from agents characterized by bounded rationality. The resulting model is capable of generating new insights about questions regarding limits to growth, sustainable development, “environmental Kuznets curves” (EKC), and dematerialization (see van den Bergh and Hofkes, 1998). Up until now, EKC studies have not been based on models allowing for structural change (see Selden and Song, 1994, Stern et al., 1996 and de Bruyn and Heintz, 1999). The organization of this paper is as follows. Section 2 briefly discusses neoclassical growth theory from theoretical and empirical perspectives. Section 3 presents an alternative view on growth, by distinguishing three growth mechanisms. Section 4 presents a related alternative view and formalization of the aggregate production function. 5 and 6 provide a formalization of the three growth mechanisms. Section 7 presents analytical results. Section 8 shows some numerical results. Section 9 concludes.

Economic growth must be accompanied by structural change, which implies continuous introduction of new products and new production technologies, and changes in efficiency and dematerialization. This article proposed a more disaggregated view on growth engines or mechanisms. The traditional simple single-sector single-product model of national income allocation based on factor productivities that has historically been used to select and justify the choice of constant output elasticities for a Cobb–Douglas type of production function is not applicable to the case of a growing economy. Instead, an alternative production function was proposed. Finally, a demand feedback mechanism was based on the scale-cum-learning cycle, which combines the effects of scale, learning, and price elasticity changes. The main weakness of the standard production function as used in existing growth models is that it does not provide sufficient information about what is actually happening when substitution takes place, for instance, from materials use to capital use in production. This is problematic from the viewpoint of both interpretation and prediction. The model proposed here proposed a different production function specification that aims at clarifying the relationship between the physical and value dimensions of economic growth. The overall model offers a starting point for more informative empirical research, putting such research as testing the environmental Kuznets curve hypothesis in a theoretical context that explicitly recognizes structural changes underlying economic growth. Such a context has up till now been lacking. Analytical results indicate that given the scale-cum-learning cycle mechanism, perpetual exponential growth at a constant rate is possible but only for a constant rate of learning. This is consistent with a ‘lifecycle’ interpretation of technological innovation and progress. In addition, it was found that a is variable over time, which means that unlimited growth implies a changing composite product or product mix. This suggests that economic growth takes the form of an evolutionary process. Further model analysis was based on numerical simulation. For this purpose, the model was extended with an equation that calculates the (change in) resource input level required for maintaining a constant growth rate. The results show that qualitative patterns change when the (constant) growth rate is increased. In particular, three patterns show interesting shifts in qualitative structure: the relation between required resource input given a constant growth rate and income, the efficiency curve, and the dematerialization curve. While environmental Kuznets curves seems possible for relatively low growth rates, they are not found for growth rates above a certain minimum level. For sufficiently high growth rates, required resource input increases almost linearly with income. Moreover, the rate of growth influences the type of patterns found for technical efficiency and dematerialization. These patterns follow from the combined impact of changes in capital, stock of knowledge, and resource use. No simple relation between these exists, implying that prediction of patterns is not straightforward. The reason is that the three growth mechanisms–relating to resource use, scale and learning, and value creation or dematerialization–provide for interactions that defy any simple generalization on a macrolevel. This means that theoretical results provide insufficient information to say anything about future patterns of growth in relation to resource use. Empirical information, among others, on growth rates and initial conditions needs to be added to decide which growth/resource use regime is most relevant, and at which actual growth rates the qualitative or structural changes occur. From an empirical perspective, the remaining problem is to quantify the two macro-variables, f and g, and trace their historical trends. From an economic policy perspective, the problem is to control and manage them to achieve long-term sustainability. In view of the discussion above, the most relevant policy tool is R&D investment, supplemented by regulation as applied to natural resource utilization, especially energy use efficiency and ‘dematerialization,’ where the latter would cover recycling of materials and products. Although the functional specifications and parameter values are not based on empirical data, the sequence of patterns is typical for a realistic range of (constant) parameter values. Of course, one may wonder at which growth rates qualitative changes in patterns will occur in reality. This can only be answered with empirical studies. The model presented here provides a disaggregated framework for tackling this question, by clarifying the combined effect of growth mechanisms on growth patterns and environmental pressure indicators.