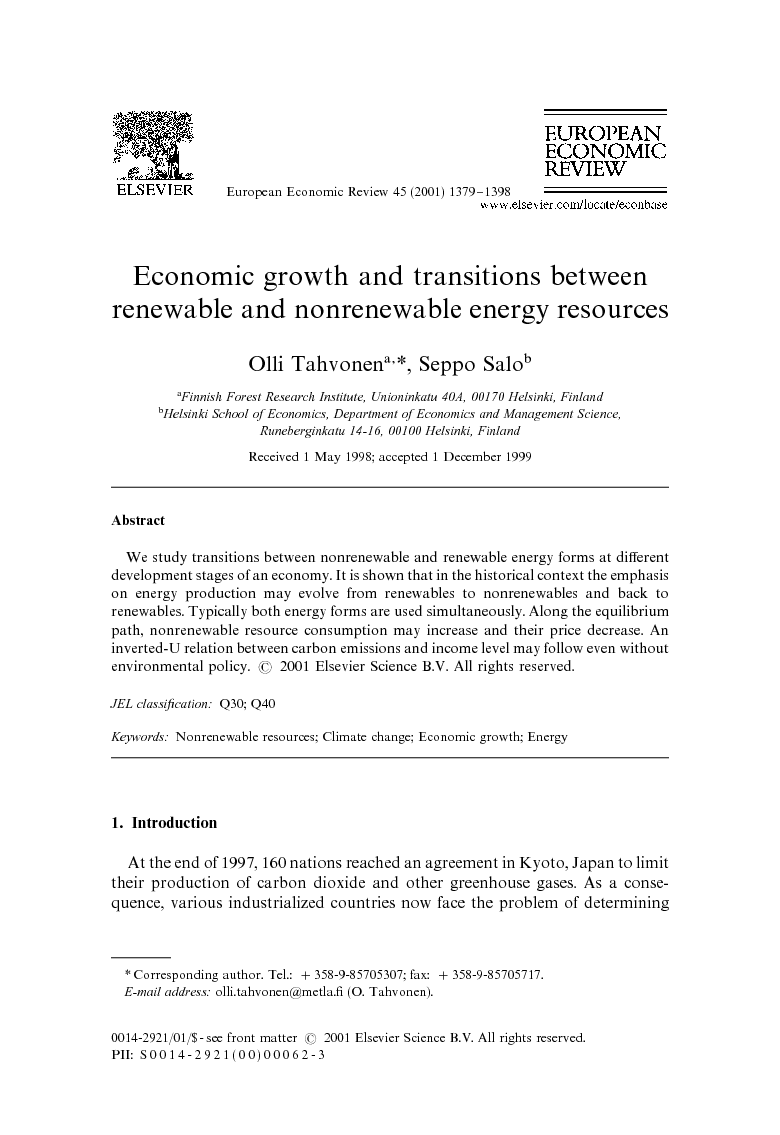 We study transitions between nonrenewable and renewable energy forms at different development stages of an economy. It is shown that in the historical context the emphasis on energy production may evolve from renewables to nonrenewables and back to renewables. Typically both energy forms are used simultaneously. Along the equilibrium path, nonrenewable resource consumption may increase and their price decrease. An inverted-U relation between carbon emissions and income level may follow even without environmental policy.

The debate on climate change necessarily includes some predictions on the future development of fossil fuel consumption and carbon dioxide emissions. The economic understanding of these matters is usually based on some extension of the classical Hotelling (1931) model. Although the literature is extensive, models that explain the historical development of nonrenewable resource use and their prices are more or less absent. Our model is able to produce declining prices and increasing consumption of nonrenewable resources endogenously. It also describes the transition between energy forms as a smooth shift in the emphasis from renewables to nonrenewables and finally back to renewables. These features differ quite sharply from earlier economic studies. It may be asked why economic research on nonrenewable resources has put so much emphasis on the physical resource depletion since even geologists have pointed out that physical depletion is difficult to imagine (Goeller and Winberg, 1976). In the model of Chakravorty et al. (1997) market incentives to develop solar energy occur, since oil and natural gas are predicted to be totally used up during 50–70 years. Technical development is assumed to decrease the cost of solar energy but the costs of extracting the currently estimated fossil fuel reserves are postulated to remain constant or increasing. According to another hypothesis technical development may still increase the stock of economic reserves from those currently estimated. In this case the prediction of Chakravorty et al. (1997) may overestimate the role of market forces in developing commercial solar energy and underestimate the future carbon emissions.