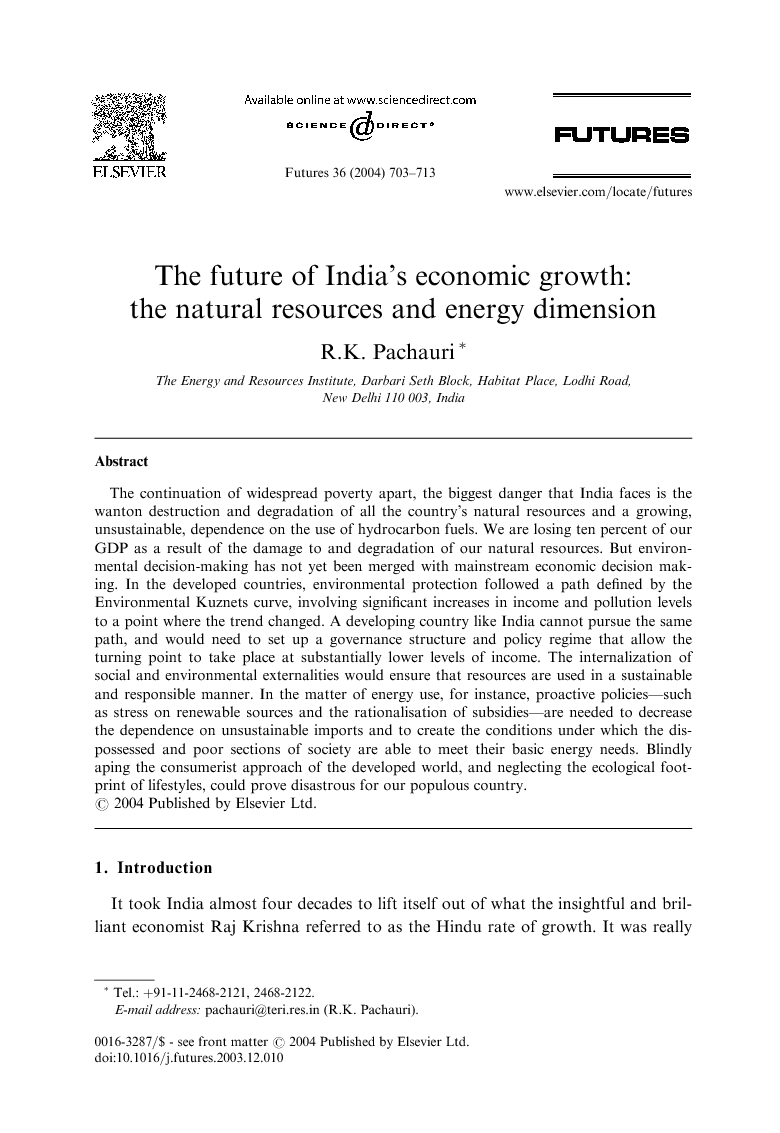 The continuation of widespread poverty apart, the biggest danger that India faces is the wanton destruction and degradation of all the country’s natural resources and a growing, unsustainable, dependence on the use of hydrocarbon fuels. We are losing ten percent of our GDP as a result of the damage to and degradation of our natural resources. But environmental decision-making has not yet been merged with mainstream economic decision making. In the developed countries, environmental protection followed a path defined by the Environmental Kuznets curve, involving significant increases in income and pollution levels to a point where the trend changed. A developing country like India cannot pursue the same path, and would need to set up a governance structure and policy regime that allow the turning point to take place at substantially lower levels of income. The internalization of social and environmental externalities would ensure that resources are used in a sustainable and responsible manner. In the matter of energy use, for instance, proactive policies—such as stress on renewable sources and the rationalisation of subsidies—are needed to decrease the dependence on unsustainable imports and to create the conditions under which the dispossessed and poor sections of society are able to meet their basic energy needs. Blindly aping the consumerist approach of the developed world, and neglecting the ecological footprint of lifestyles, could prove disastrous for our populous country.

It took India almost four decades to lift itself out of what the insightful and brilliant economist Raj Krishna referred to as the Hindu rate of growth. It was really in the mid eighties after Prime Minister, Rajiv Gandhi took charge of the Government at the Centre that economic growth reached levels of over 5% per annum. However, towards the end of the decade of the 1980s, the Indian economy sank into a state of stagnation, reaching crisis levels in 1991 just before P.V. Narasimha Rao took over as Prime Minister. His most valuable contribution towards meeting that crisis was to appoint Dr. Manmohan Singh, a distinguished economist and experienced policy maker, as the Finance Minister. What was even more creditable was the fact that Narasimha Rao provided complete backing for the decisions of his Finance Minister, which, in a short period of time started showing favourable results. By the mid 1990s, the Indian economy had developed enormous momentum, and was receiving plaudits and praise from all over the world. Delicensing of industrial expansion and investment decisions, as well as a forward looking policy framework had a major impact on the entire psychology of the nation, creating conditions of growth and confidence in the future, which have become a permanent asset for the Indian economy. However, as we look into the future, there is no place for complacency and perhaps even less room for euphoria. There are dark clouds which threaten the Indian system of democracy. There is growing and deepening corruption all around, which not only adds to cost and delays in decision making, but also distorts the allocation of resources. The healthy effect that an honest system or structure provides for human activities where any rewards and benefits go only to those who excel through sheer dint of hard work or superior enterprise is now giving way in several cases to supremacy of those who subvert or distort the system to earn some unfair advantage. In some cases corruption and skullduggery appear to pay individuals far more than honest hard work and genuine entrepreneurship. While the picture may not be as bleak as this, the portents defining India’s future are certainly clouded by growing and genuine concerns on account of these distortions. The social cost or benefits for wrong-doing and high returns from criminal behaviour within an institutional framework and official decision making are features that cannot be corrected easily. The criminalization of Indian politics and the hijacking of Government and governance at various levels by those who have no respect for the law and are yet responsible for its implementation are a major distortion in the Indian polity today. This, of course, is an issue which needs to engage the thinking and action of social reformers, honest and patriotic leaders, who fortunately still function in fairly significant numbers at various levels, supported by an active and a largely unbiased media, including others who are responsible for forming public opinion. Perhaps these sober and sage elements of society will develop some energy and coordination by which the unhealthy trends evident in the Indian system can be reversed. But what should really concern decision makers and policy analysts to an even larger extent is the enormous danger that economic progress in India faces as a result of wanton destruction and degradation of natural resources of all kinds and a growing dependence on the use of hydrocarbon fuels that cannot be sustained. The distortion in the Indian economy that degradation and damage in our natural resources wealth creates perhaps imposes a much higher burden and poses a far more serious challenge than any other set of contrary forces that stand in the way of healthy and sustainable economic progress. We see widespread evidence of these distortions going on all around us, but as of now Indian society has not internalized in its growth agenda the externalities and distortion that take place on account of environmental and natural resource damage that we see around us. A simple example can be seen in the growth of our dependence on bottled drinking water. Over the last decade and a half, we have grown accustomed to drinking water only from plastic bottles, while not too long ago water flowing from the tap or drawn from the village pond and certainly from the rivers of this country was of totally drinkable quality. And today, not only have we killed all forms of life in our rivers and large lakes, not to mention the hundreds of thousands of little ponds and streams throughout the country, but have made most of these water bodies unfit even for bathing, recreation and other social uses that Indians have been used to for thousands of year. Almost like adding insult to injury, while we have taken away the economic benefits that a natural resource like our flowing as well as stationary sources of water were providing, excluded as these were from calculation of the country’s GDP, we have now started counting the production of bottled drinking water as a contribution to GDP. In other words, we have destroyed what was naturally ours for the asking, totally uncompensated for by any payments from human beings to Mother Nature. To this we have added the illusion of providing more goods and services such as bottled water.

In conclusion, it can be said that the grim scenario pertaining to our natural resources and security of energy supply require enlightened decision-making in pricing of the services provided by natural resources and energy use. In the case of natural resources, internalization of social and environmental externalities would ensure that these resources are used in a sustainable and responsible manner. In the case of energy services, the removal of inefficient and perverse subsidies would not only lead to more efficient supply and distribution systems, but would also ensure optimal utilization of energy at various stages of the entire cycle. However, proactive policies are essential for creating the conditions under which the dispossessed and poor sections of society are able to meet their basic energy needs. Poverty alleviation in particular would rest heavily on the accessibility that poor communities and households have to modern forms of energy, which in most cases would have to come from renewable sources. Again, including security considerations and the total cost of supply and distribution systems would ensure that renewable energy sources are exploited to a larger extent leading to resource use efficiency in the economy. Sustainable development cannot be achieved if large sections of the Indian population, which in magnitude would grow in the coming years, are deprived of the very basic provision of non-polluting and efficient forms of energy. The entire strategy for conservation of natural resources and meeting the energy needs of India’s growing population, therefore, would rest on a realization that externalities in the use of natural resources including energy are effectively eliminated by explicit inclusion in fiscal decisions. Also important would be a proactive approach by which equity is promoted in opportunities as well as access to the services provided by energy in particular for basic human subsistence for all.