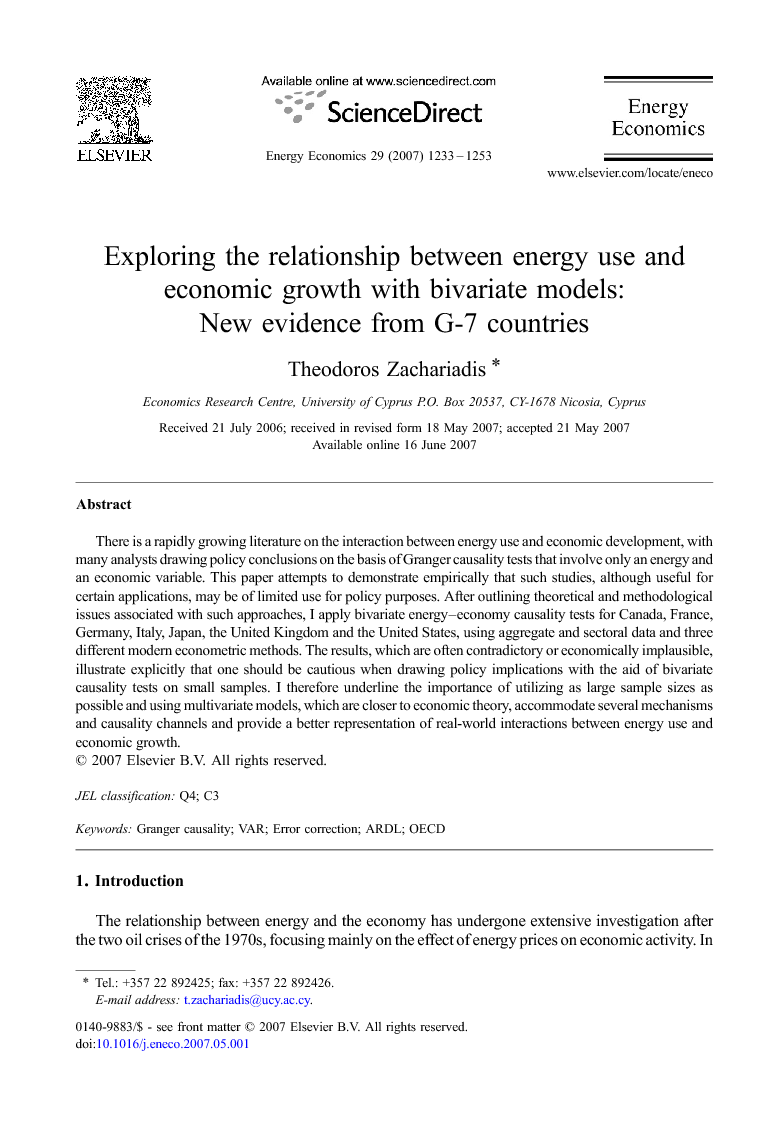 There is a rapidly growing literature on the interaction between energy use and economic development, with many analysts drawing policy conclusions on the basis of Granger causality tests that involve only an energy and an economic variable. This paper attempts to demonstrate empirically that such studies, although useful for certain applications, may be of limited use for policy purposes. After outlining theoretical and methodological issues associated with such approaches, I apply bivariate energy–economy causality tests for Canada, France, Germany, Italy, Japan, the United Kingdom and the United States, using aggregate and sectoral data and three different modern econometric methods. The results, which are often contradictory or economically implausible, illustrate explicitly that one should be cautious when drawing policy implications with the aid of bivariate causality tests on small samples. I therefore underline the importance of utilizing as large sample sizes as possible and using multivariate models, which are closer to economic theory, accommodate several mechanisms and causality channels and provide a better representation of real-world interactions between energy use and economic growth.

The relationship between energy and the economy has undergone extensive investigation after the two oil crises of the 1970s, focusing mainly on the effect of energy prices on economic activity. In a recent paper, for example, Brown and Yücel (2002) provide a survey of the theory and evidence on the macroeconomic impact of energy prices. Apart from price effects, the relationship between energy consumption and economic growth was also explored. The first relevant study dates back to the late 1970s (Kraft and Kraft, 1978). The literature has grown slowly thereafter, and since the early 1990s this relationship has been the subject of a rapidly increasing number of studies. Most of these studies were primarily empirical, focusing on the concept of Granger causality. Since the seminal paper by Granger (1969), the literature on Granger causality has grown considerably — slowly during the first years and more rapidly in recent years. Among recent applied studies, a significant amount of work has been devoted to addressing the above mentioned question of causality between energy consumption and economic development. Lee, 2005 and Lee, 2006 and Yoo (2006) provide extensive summary tables of results regarding Granger causality between economic growth and energy use or electricity use. Overall, the most thorough review of existing work is that of Chontanawat et al. (2006). The results from research in this field worldwide are very mixed, with some studies finding unidirectional Granger causality from energy consumption to economic growth or vice versa, others confirming the ‘neutrality hypothesis’ (i.e. no causality in any direction), and other studies finding bidirectional causality. It is interesting to note that some results vary for the same countries and sample periods and despite the use of similar datasets, depending on the estimation methods that were applied (bivariate or multivariate models, employing different causality techniques). Although it has been attempted to provide economic interpretations for all these results, their diversity indicates clearly that such ex post conclusions have to be treated with caution. Apart from risky economic interpretations of contradictory results, analysts often proceed with deriving implications for energy policy on the basis of their Granger causality tests. If unidirectional causality from energy to the economy is found, a usual conclusion is that limiting energy use (e.g. through energy conservation) would hamper economic growth. A result showing causality running from the economy to energy is said to imply that energy conservation measures may be implemented without putting economic development at risk. Bidirectional causality indicates mutual interdependence of energy and the economy so that in a forecast model both variables should be treated as endogenous. Finally, when the analysis seems to confirm the ‘neutrality hypothesis’, i.e. no causality between the two variables, the usual explanation is that the economy develops irrespective of energy consumption patterns and vice versa; in such a case economic growth will not affect energy use (probably because of counterbalancing effects), and policies aiming at energy savings may not be detrimental to economic development. Some analysts point to further and more concrete policy implications. For example, Lee (2006) uses the results of his causality tests between primary energy consumption and GDP per capita to conclude that the United Kingdom, Germany and Sweden “may take greater responsibility to reduce their CO2 emissions because such a reduction in energy consumption would not significantly affect economic growth”. Conversely, in Canada, Belgium, the Netherlands and Switzerland “the enactment of the Kyoto Protocol will actually harm the economy” (pp. 1091–1092). It is evident that bivariate energy–economy models, despite their usefulness because they can be applied in countries where only limited data are available, represent only a rough approximation of reality. However, the related literature has boomed in recent years1 and most of these studies employ bivariate approaches and derive policy implications such as those mentioned in the previous paragraphs. Therefore, in this paper I will try to demonstrate, mainly through empirical applications, why such conclusions have to be treated with care. First I will go through some theoretical and methodological considerations in 2 and 3 respectively. In Section 4 I will apply three different modern methods to test for Granger causality between energy consumption (total and disaggregated in the main sectors: households, industry, services and transport) and an appropriate economic variable in the seven OECD countries known as G-7: Canada, France, Germany, Italy, Japan, the United Kingdom and the United States. The methods comprise: i) a test based on a Vector Error Correction model, ii) a test based on an autoregressive distributed lag (ARDL) model and iii) the Toda–Yamamoto test. Section 5 summarizes and discusses the test results, and Section 6 will conclude.

It is widely accepted that there is still much empirical work to do on examining the relationship between energy and the economy (in terms of productivity, employment, financial stability or GDP growth), while at the same time the theoretical foundations may not be firm as they are often challenged by empirical findings. This paper has focused on bivariate energy–economy causality tests, the use of which has boomed in recent years worldwide, discussing their appropriateness through a series of empirical applications. Theoretical and methodological issues arising from the number and type of variables or the test methods used have been outlined. In order to illustrate how conflicting results can be obtained by applying different testing approaches in small samples with bivariate models, I tested for the existence of causality between energy and economy variable pairs in the G-7 countries, using aggregate and sectoral data and three different modern econometric methods. Results of the three methods were in agreement for the US but in large disparity for all other countries. This problem, further supported by results from a smaller US sample, has to be associated with sample size and the well-known loss of power of these tests in small samples. This is one reason to remain skeptical about policy conclusions and recommendations when they are drawn on the basis of causality tests conducted with one method in a small sample — and indeed many of the causality studies that have been published involve samples of not more than 40 observations per country. Another reason for skepticism is associated with the use of bivariate models as such. Firstly, their theoretical framework is not very rigorous since they only constitute reduced form models and do not strictly follow a demand function or a production function approach. Secondly, the analysis is likely to suffer from omitted variable bias. Thirdly, channels of causality may be hidden when only two variables are used. The problem may become more pronounced if unmatching variables are used (e.g. total energy use and GDP per capita, or electricity consumption per capita and industrial output). It is true that, particularly in developing countries, few datasets are available for a sufficiently long period of time in order to enable a robust time series analysis. Energy prices are hardly available, so that the consumer price index is sometimes used as a price variable instead. While all this makes sense, one should nonetheless be cautious when interpreting the findings. Differences in causality results shown in Table 2, depending on the method used or the level of aggregation, illustrate some of the problems one has to keep in mind. Comparing the results of this paper with those of previous studies displayed in Table 4, the picture is confusing: there is no clear result for any country as regards the existence and the direction of causality. Sample size, test methods and the different periods in which these studies had been conducted can partly explain these deviations. However, instead of trying to understand more deeply discrepancies between bivariate models which are in any case a rough representation of reality, and although complexity is not necessarily a virtue, it seems appropriate to use multivariate models with a firm theoretical background and with sufficient sample sizes in order to test energy–economy linkages within an empirical time series context. Other modeling frameworks such as partial or general equilibrium approaches may be even more suitable platforms for such analyses, provided that data requirements can be met without sacrificing the robustness of these models. Furthermore, the use of a quality-adjusted energy index (Cleveland et al., 2000), along with similarly adjusted capital and labor indices if applicable (Berndt, 1990) has to be seriously considered, particularly if the analysis focuses on energy intensity or efficiency.