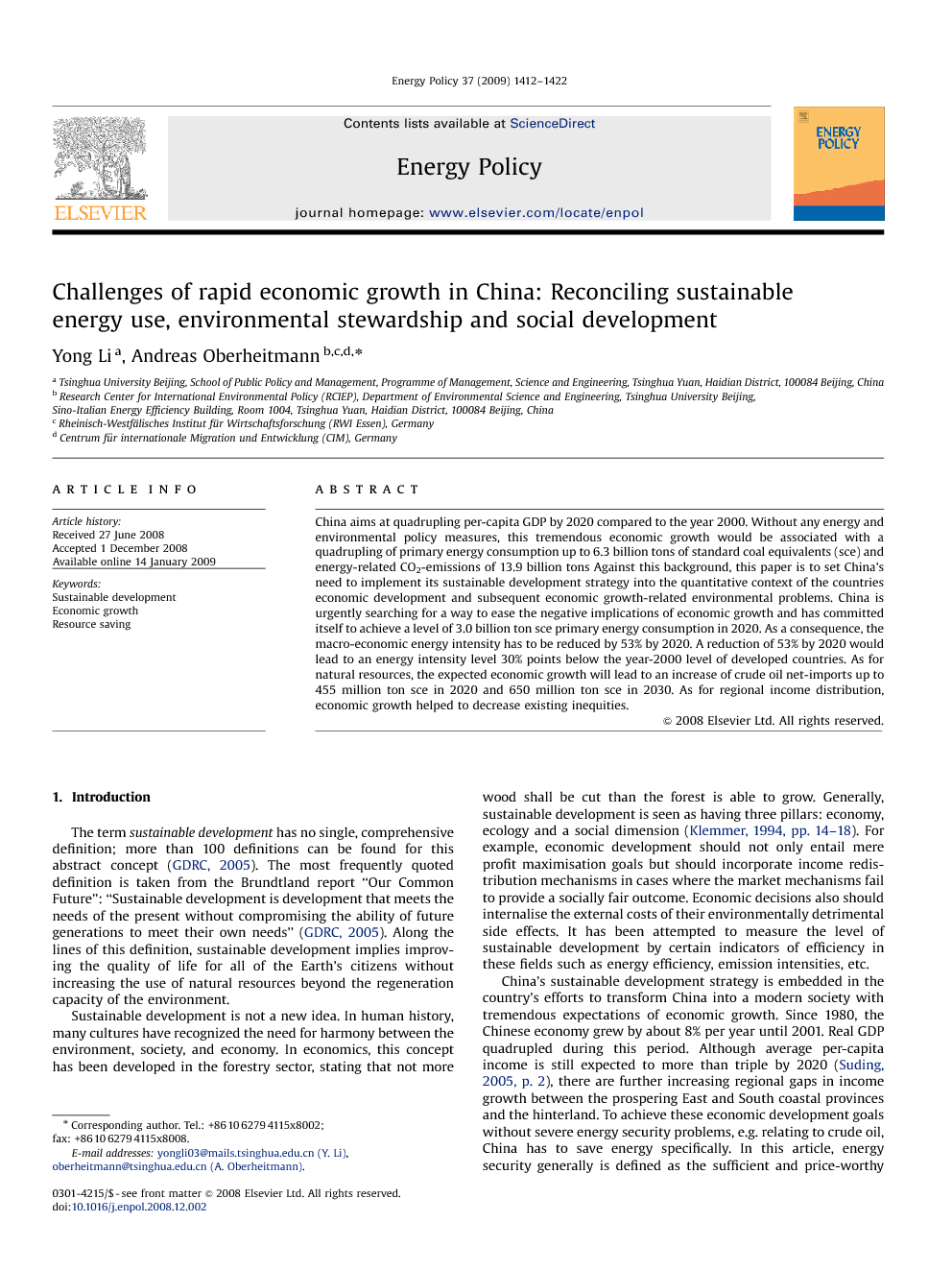 China aims at quadrupling per-capita GDP by 2020 compared to the year 2000. Without any energy and environmental policy measures, this tremendous economic growth would be associated with a quadrupling of primary energy consumption up to 6.3 billion tons of standard coal equivalents (sce) and energy-related CO2-emissions of 13.9 billion tons Against this background, this paper is to set China's need to implement its sustainable development strategy into the quantitative context of the countries economic development and subsequent economic growth-related environmental problems. China is urgently searching for a way to ease the negative implications of economic growth and has committed itself to achieve a level of 3.0 billion ton sce primary energy consumption in 2020. As a consequence, the macro-economic energy intensity has to be reduced by 53% by 2020. A reduction of 53% by 2020 would lead to an energy intensity level 30% points below the year-2000 level of developed countries. As for natural resources, the expected economic growth will lead to an increase of crude oil net-imports up to 455 million ton sce in 2020 and 650 million ton sce in 2030. As for regional income distribution, economic growth helped to decrease existing inequities.

The term sustainable development has no single, comprehensive definition; more than 100 definitions can be found for this abstract concept ( GDRC, 2005). The most frequently quoted definition is taken from the Brundtland report “Our Common Future”: “Sustainable development is development that meets the needs of the present without compromising the ability of future generations to meet their own needs” ( GDRC, 2005). Along the lines of this definition, sustainable development implies improving the quality of life for all of the Earth's citizens without increasing the use of natural resources beyond the regeneration capacity of the environment. Sustainable development is not a new idea. In human history, many cultures have recognized the need for harmony between the environment, society, and economy. In economics, this concept has been developed in the forestry sector, stating that not more wood shall be cut than the forest is able to grow. Generally, sustainable development is seen as having three pillars: economy, ecology and a social dimension (Klemmer, 1994, pp. 14–18). For example, economic development should not only entail mere profit maximisation goals but should incorporate income redistribution mechanisms in cases where the market mechanisms fail to provide a socially fair outcome. Economic decisions also should internalise the external costs of their environmentally detrimental side effects. It has been attempted to measure the level of sustainable development by certain indicators of efficiency in these fields such as energy efficiency, emission intensities, etc. China's sustainable development strategy is embedded in the country's efforts to transform China into a modern society with tremendous expectations of economic growth. Since 1980, the Chinese economy grew by about 8% per year until 2001. Real GDP quadrupled during this period. Although average per-capita income is still expected to more than triple by 2020 (Suding, 2005, p. 2), there are further increasing regional gaps in income growth between the prospering East and South coastal provinces and the hinterland. To achieve these economic development goals without severe energy security problems, e.g. relating to crude oil, China has to save energy specifically. In this article, energy security generally is defined as the sufficient and price-worthy allocation of energy resources to the energy users. Specifically, energy security issues in China, inter alia, touch aspects such as sufficient transport capacities, e.g. for coal and natural gas, security of supply for crude oil and sufficient generation capacities for electricity. Negative side effects of this substantial economic growth are increasing environmental degradation (e.g., forest degradation through acid rain) and growing social problems (e.g., educational shortfalls and increasing crime rates caused by migration). One instrument to ease the negative socio-economic and environmental implications of this growth pattern is to integrate economic, environmental and social policy into a national sustainable development strategy. This paper is to set China's need to develop a sustainable development strategy and the current approaches to implement this strategy into the quantitative context of the countries economic development and subsequent economic growth-related environmental problems. After giving an introduction into the problem (Section 1), China's rapid economic growth and future development goals are analysed (Section 2). Section 3 provides for an overview of the evolution of China's approach towards a sustainable development and the current state of China's sustainable development strategy. Against this background, Section 4 analyses the consequences of China's economic growth for its approach towards a sustainable energy, environmental and social development. Special focus are the resulting challenges for specific energy saving and emissions levels, net-imports of crude oil and the implications for regional income distribution inequities. A summary concludes this paper.