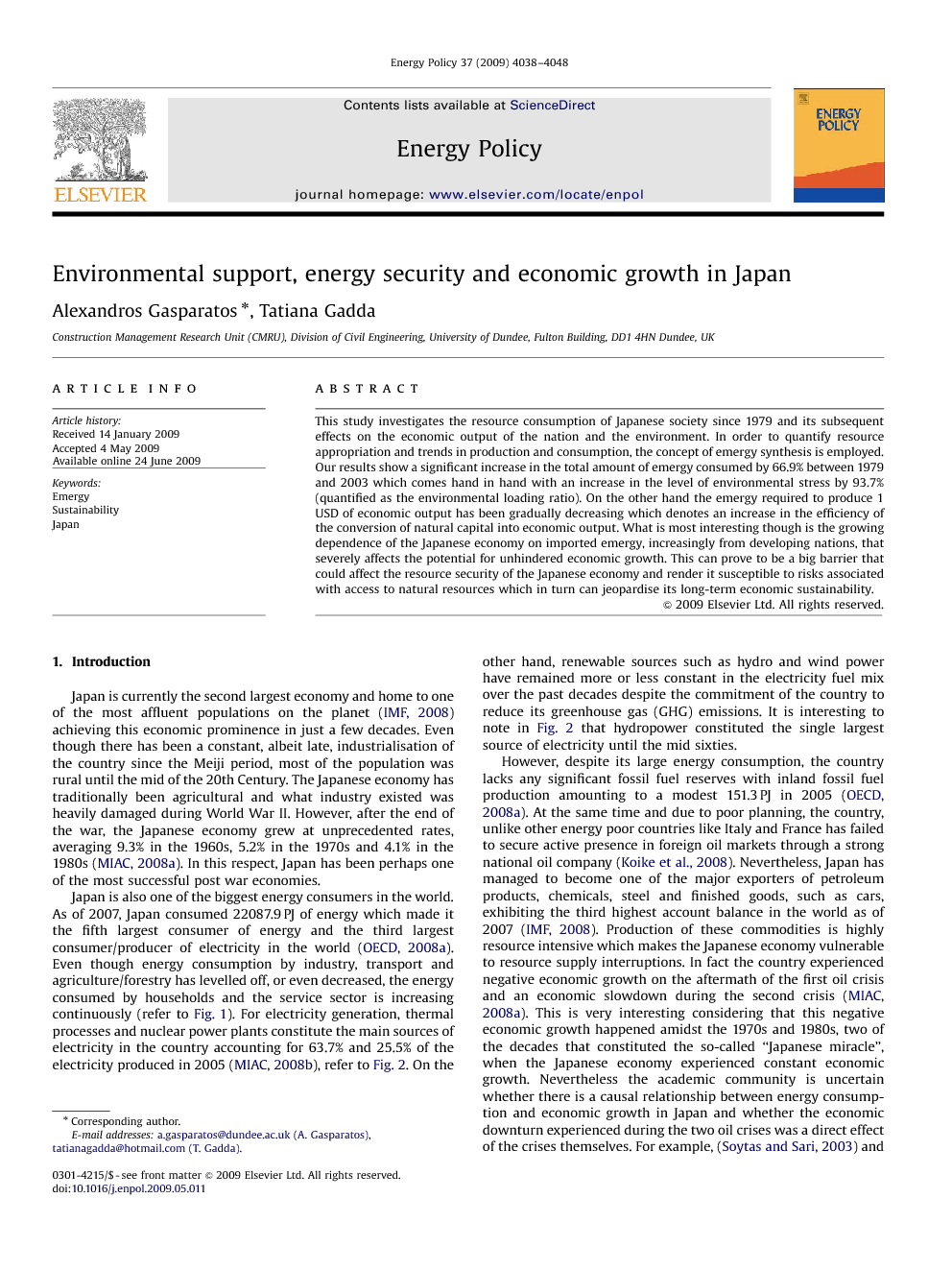 This study investigates the resource consumption of Japanese society since 1979 and its subsequent effects on the economic output of the nation and the environment. In order to quantify resource appropriation and trends in production and consumption, the concept of emergy synthesis is employed. Our results show a significant increase in the total amount of emergy consumed by 66.9% between 1979 and 2003 which comes hand in hand with an increase in the level of environmental stress by 93.7% (quantified as the environmental loading ratio). On the other hand the emergy required to produce 1 USD of economic output has been gradually decreasing which denotes an increase in the efficiency of the conversion of natural capital into economic output. What is most interesting though is the growing dependence of the Japanese economy on imported emergy, increasingly from developing nations, that severely affects the potential for unhindered economic growth. This can prove to be a big barrier that could affect the resource security of the Japanese economy and render it susceptible to risks associated with access to natural resources which in turn can jeopardise its long-term economic sustainability.

The emergy synthesis of the Japanese economy highlights an economic system that has greatly increased its resource consumption and its economic output since 1979. The bulk of the consumed emergy has come from abroad and since 1989 from developing countries. This results in an inequitable trade regime with Japan actually receiving more emergy in a dollar-to-dollar basis as a result of its lower emergy-to-money ratio. This over reliance on foreign natural capital can compromise the resource security of the nation and affect its long-term economic sustainability. On the other hand Japanese economic development poses an increasing stress on the environment, and particularly overseas considering that Japan is receiving most of the natural capital that fuels its economy from abroad. In particular, Japan relies greatly on imported coal for electricity consumption, and because of the energy security concerns this over reliance will not change in the foreseeable future. This will be one of the main barriers that will prevent Japan meeting its Kyoto Protocol commitments. As a result, even though there is a genuine concern and work is being done to meet its main energy policy objectives (energy security, economic development and environmental sustainability) their contradictory nature will prohibit their simultaneous fulfillment, at least in the near future. Energy (and resource) security has emerged as the over arching energy policy objective and is inexorably linked with concerns over economic development. As a result, it seems that these two considerations will override environmental sustainability in the short term. A more pro-active approach of the Japanese Government towards environmental policy by designing demand reduction strategies and coupling them with the plethora of existing energy-efficiency strategies might go some way towards reducing energy consumption and GHG emissions in the short term.