عنوان انگلیسی
Energy use and economic development: A comparative analysis of useful work supply in Austria, Japan, the United Kingdom and the US during 100 years of economic growth
دانلود فوری مقاله + سفارش ترجمه 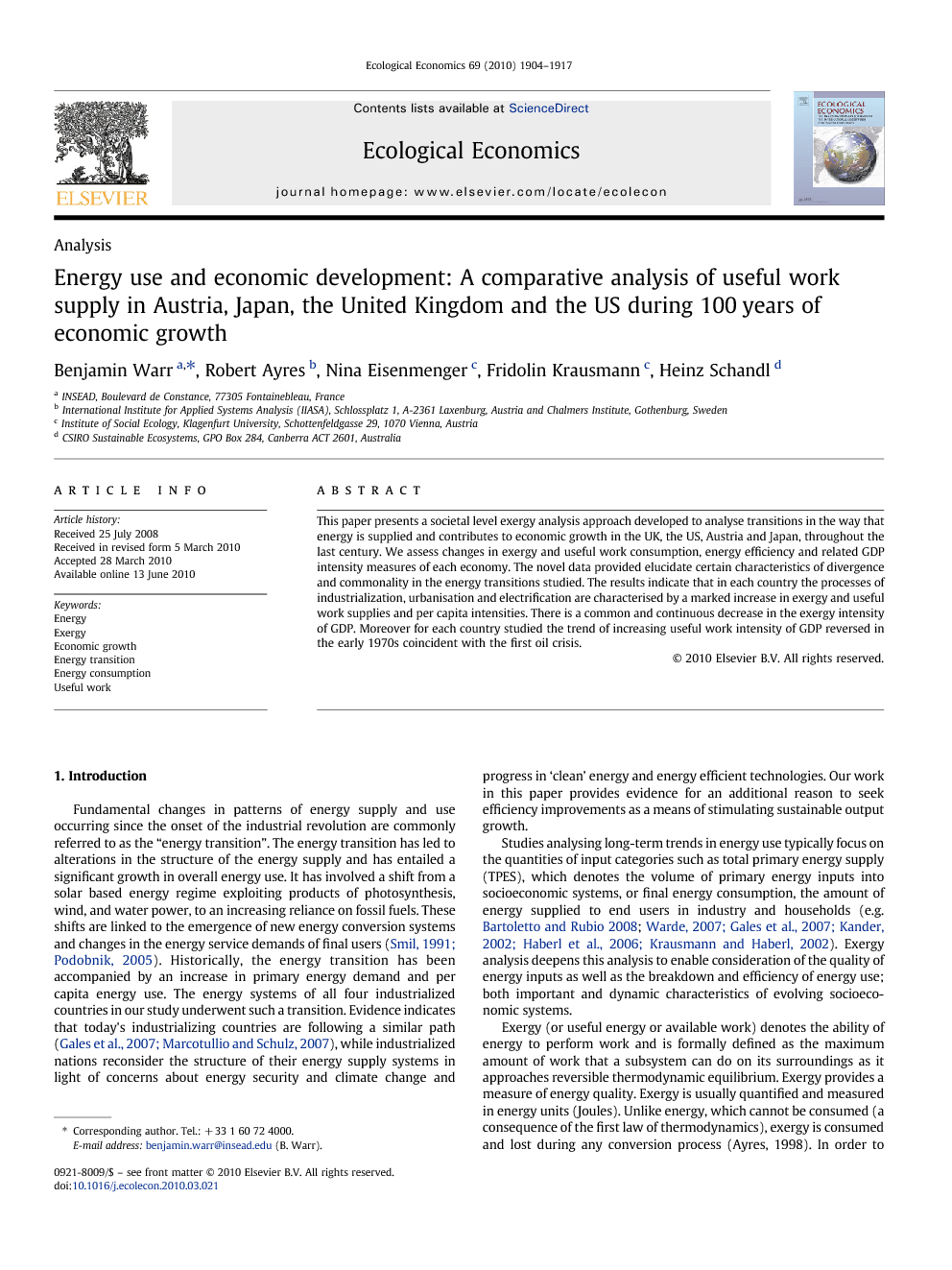 This paper presents a societal level exergy analysis approach developed to analyse transitions in the way that energy is supplied and contributes to economic growth in the UK, the US, Austria and Japan, throughout the last century. We assess changes in exergy and useful work consumption, energy efficiency and related GDP intensity measures of each economy. The novel data provided elucidate certain characteristics of divergence and commonality in the energy transitions studied. The results indicate that in each country the processes of industrialization, urbanisation and electrification are characterised by a marked increase in exergy and useful work supplies and per capita intensities. There is a common and continuous decrease in the exergy intensity of GDP. Moreover for each country studied the trend of increasing useful work intensity of GDP reversed in the early 1970s coincident with the first oil crisis.

We have presented a methodology for exergy analysis of national economies suitable for the estimation of long run trends in exergy and useful work consumption, and energy efficiency. The methodology is theoretically based on the principles of thermodynamics and specifically consideration of the 2nd law (the ‘entropy law’) and as such bears many similarities to those used by others for single year, single country assessments cited previously. Our analysis is arguably less exhaustive. This is a necessary compromise to ensure that a consistent approach is applied to source data that differs in detail and quality over time and between countries. Where historical statistics are consistent with our approach the analysis is relatively straightforward. Such is the case for electricity. However, more commonly the essential information (exergy input, useful work allocation or efficiency) was not available and needed to be estimated.23 The greatest uncertainty involves industrial uses of energy for heat which are multiple and complex. We present a means of assessing the energy efficiency of industrial use with a simple three category division of exergy use into high, medium and low temperature heat. The division is based on reported flows to industry, residential and commercial uses. The efficiency coefficients, required to estimate useful work output were obtained by standardised methods; in the case of high temperature heat, steel manufacture was used as a proxy; for mid and low temperature heat 2nd law efficiencies appropriate to the energy conversion device considered were approximated using the Carnot equation for the relevant temperature differentials. This last point highlights perhaps not only the major strength but also the limitation of the approach. The exergy efficiencies we estimate are specifically task related. Perhaps the clearest example of this is with regard mobility. A ‘complete’ assessment of the efficiency of the service provided must consider the distance and the speed of the voyage and the load of the vehicle. In practice as we discuss this is not feasible. We are restricted to providing estimates of the task efficiency specific to a given device or technology. By so doing we avoid issues of non-technical tradeoffs. For example, we do not consider the relative efficiency of wearing warm clothing over resistance domestic space heating of a room to a comfortable temperature. We are limited to consideration of the technical aspects of service delivery and do not consider qualitative preferences. The power of the exergy approach is that it enables us to compare general physical performance, by considering the actual device used in relation to the task, “such analysis delineates the limitations and inefficiencies of the devices we now have, and indicates where they should either be improved or replaced or integrated to form new systems which perform joint tasks more efficiently than either could separately accomplish”, (AIP, 1975). The concept of exergy allows us to define a theoretical maximum efficiency (or a minimum exergy requirement) to complete any given task. It follows from the definition of exergy that the actual amount of useful work delivered to all economic activities is less than the theoretical maximum or alternatively that the exergy input exceeds the minimum requirement. The ratio of the actual to the theoretical maximum can be described as the technical efficiency (as opposed to economic efficiency) with which the economy converts raw materials into finished materials. This, in turn, can be regarded as a reliable measure of the state of technology of energy conversion devices and systems. Given the prevalence and importance of such systems in industrialized economies, and the rigorous theoretical foundations of the energy-to-work framework 24 we propose in this paper that the change in efficiency, over time is a reasonable proxy measure of technical progress. The data presented has enabled us to compare the impacts of a century of unparalleled change on energy consumption. The energy transition experienced in each country has dramatically altered the structure of the energy system in each country. Common characteristics of the transition process include a rapid growth in exergy consumption accompanied by a shift from a biomass to a fossil fuel powered system. The former was constrained in size by our ability to capture energy from the sun and convert this into useful forms of energy, notably muscle work. The latter is limited only by our supplies of fossil fuels and the capacity for assimilation of wastes without catastrophic change. Useful work output shows a characteristic shift from muscle work and low temperature heat in the early phases of the energy transition, to a period of high and medium temperature heat dominating the energy system (coal-iron/steel-railroad technology regime), to a dominance of electricity-consuming services (by businesses and households) and petroleum-based transportation services. The drivers of change have been many and include industrialization, urbanisation and electrification, but specifically growth itself. The data we provide will permit examination of the relationship between these drivers of change and efficiency improvements in the way that energy is used and most importantly economic growth. We have qualitatively described a process whereby efficiency improvements provide more useful work per unit of energy purchased and hence drive down the costs of products and services (ceteris paribus). Subsequent research will seek to quantitatively assess the importance of energy efficiency improvements as a source of growth and the potential for decoupling of energy use from growth in the future.