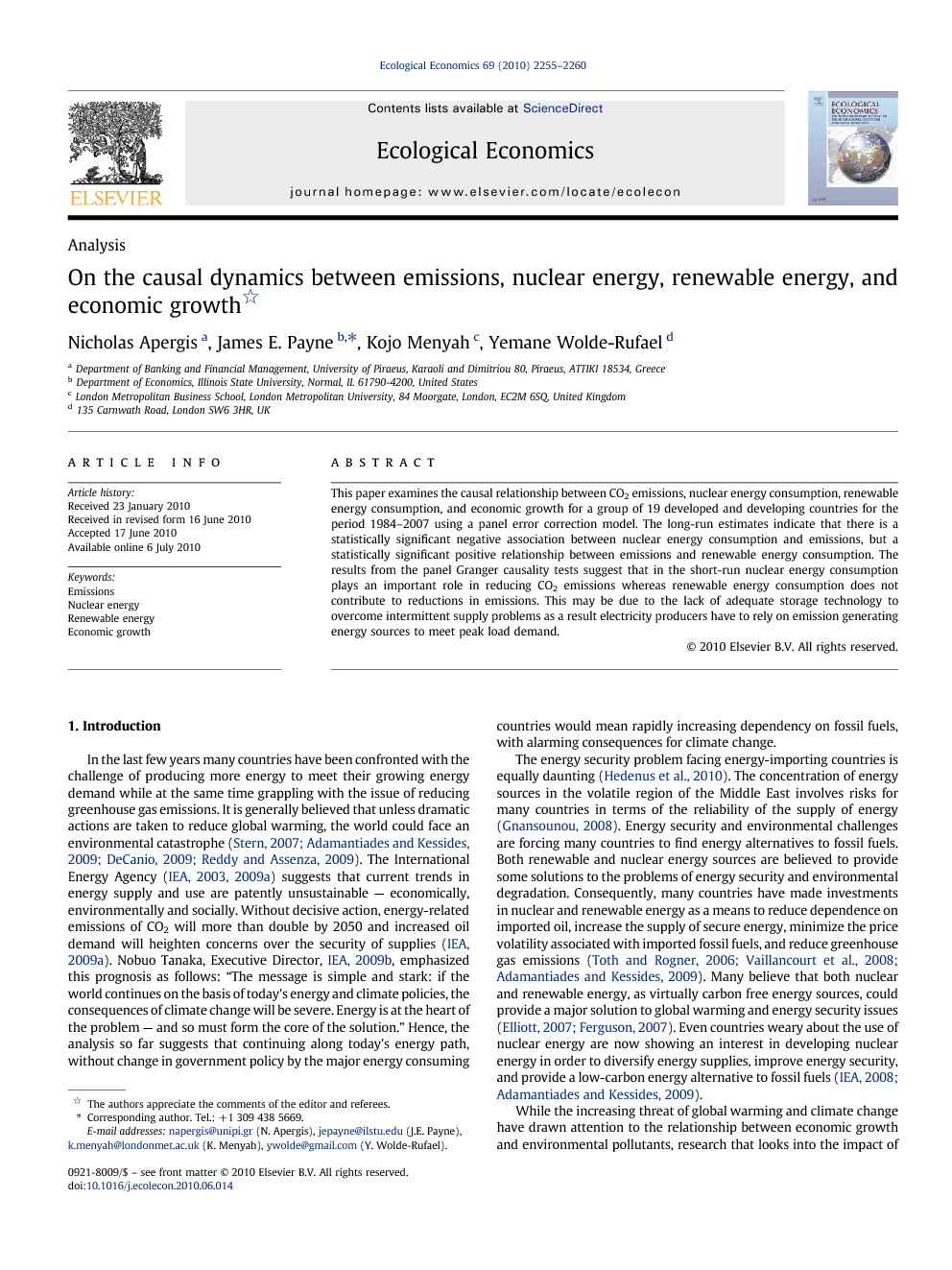 In the last few years many countries have been confronted with the challenge of producing more energy to meet their growing energy demand while at the same time grappling with the issue of reducing greenhouse gas emissions. It is generally believed that unless dramatic actions are taken to reduce global warming, the world could face an environmental catastrophe (Stern, 2007, Adamantiades and Kessides, 2009, DeCanio, 2009 and Reddy and Assenza, 2009). The International Energy Agency (International Energy Agency, 2003 and International Energy Agency, 2009a) suggests that current trends in energy supply and use are patently unsustainable — economically, environmentally and socially. Without decisive action, energy-related emissions of CO2 will more than double by 2050 and increased oil demand will heighten concerns over the security of supplies (IEA, 2009a). Nobuo Tanaka, Executive Director, IEA, 2009b, emphasized this prognosis as follows: “The message is simple and stark: if the world continues on the basis of today's energy and climate policies, the consequences of climate change will be severe. Energy is at the heart of the problem — and so must form the core of the solution.” Hence, the analysis so far suggests that continuing along today's energy path, without change in government policy by the major energy consuming countries would mean rapidly increasing dependency on fossil fuels, with alarming consequences for climate change. The energy security problem facing energy-importing countries is equally daunting (Hedenus et al., 2010). The concentration of energy sources in the volatile region of the Middle East involves risks for many countries in terms of the reliability of the supply of energy (Gnansounou, 2008). Energy security and environmental challenges are forcing many countries to find energy alternatives to fossil fuels. Both renewable and nuclear energy sources are believed to provide some solutions to the problems of energy security and environmental degradation. Consequently, many countries have made investments in nuclear and renewable energy as a means to reduce dependence on imported oil, increase the supply of secure energy, minimize the price volatility associated with imported fossil fuels, and reduce greenhouse gas emissions (Toth and Rogner, 2006, Vaillancourt et al., 2008 and Adamantiades and Kessides, 2009). Many believe that both nuclear and renewable energy, as virtually carbon free energy sources, could provide a major solution to global warming and energy security issues (Elliott, 2007 and Ferguson, 2007). Even countries weary about the use of nuclear energy are now showing an interest in developing nuclear energy in order to diversify energy supplies, improve energy security, and provide a low-carbon energy alternative to fossil fuels (International Energy Agency, 2008 and Adamantiades and Kessides, 2009). While the increasing threat of global warming and climate change have drawn attention to the relationship between economic growth and environmental pollutants, research that looks into the impact of nuclear and renewable energy as possible panacea for emission reductions has been conspicuous by its absence. To date, empirical research has focused on investigating the causal relationship between energy consumption and economic growth, on the one hand, and between energy consumption and pollutant emissions on the other (Coondoo and Dinda, 2002, Dinda, 2004, Soytas et al., 2007, Chontanawat et al., 2008, Aslanidis and Iranzo, 2009, Apergis and Payne, 2009 and Apergis and Payne, 2010a); Sadorsky, 2009a, Sari and Soytas, 2009, Soytas and Sari, 2009, Ozturk, 2010, Payne, 2009, Payne, 2010a and Payne, 2010b). There is a dearth of empirical research that looks into the causal relationship between nuclear energy consumption, renewable energy consumption, and CO2 emissions using modern advances in time series econometrics associated with causality testing. The purpose of this study is to fill this gap by investigating the causal link between nuclear energy consumption, renewable energy consumption, CO2 emissions, and economic growth for a group of 19 developed and developing countries for the period 1984–2007 within a panel error correction model framework. The main reason for studying the relationship between carbon emissions, nuclear energy and renewable energy is that both nuclear and renewable energy play an important role in the current debate on environmental protection and sustainable development. To our knowledge, this is the first study to use a heterogeneous panel error correction model to explore the causal relationships between nuclear and renewable energy consumption, CO2 emissions, and economic growth. This allows us to draw conclusions from the analysis which may be applicable to a broad range of countries. This is important in light of the fact that there is a global effort to find ways of reducing emissions and the role of various energy sources in helping to achieve such an objective. In the light of the discussion above, the rest of the study is organized as follows. Section 2 briefly discusses the potential role of nuclear and renewable energy in mitigating emissions. Section 3 describes the data and methodology along with the empirical evidence. Concluding remarks are presented in Section 4.