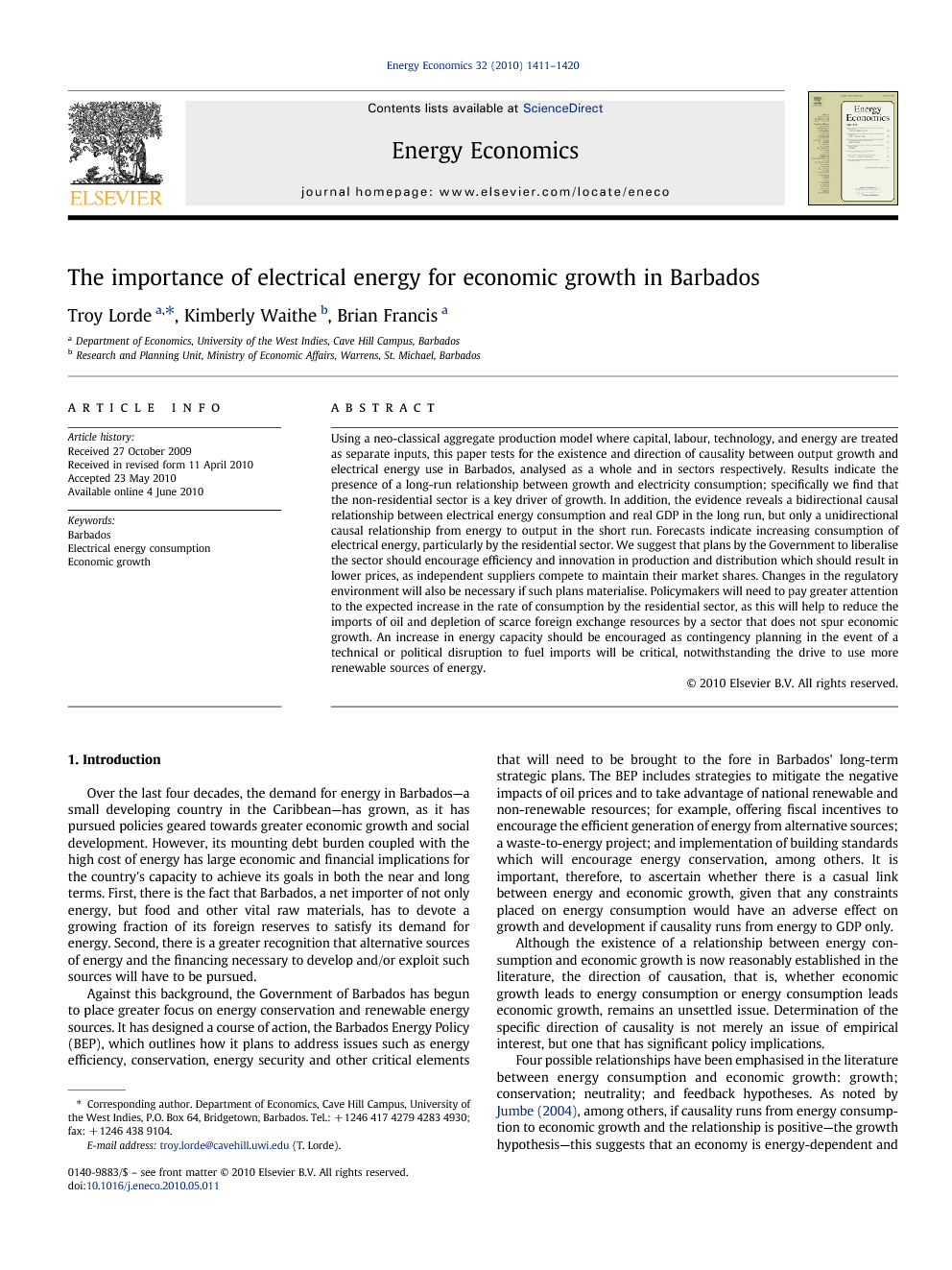 Using a neo-classical aggregate production model where capital, labour, technology, and energy are treated as separate inputs, this paper tests for the existence and direction of causality between output growth and electrical energy use in Barbados, analysed as a whole and in sectors respectively. Results indicate the presence of a long-run relationship between growth and electricity consumption; specifically we find that the non-residential sector is a key driver of growth. In addition, the evidence reveals a bidirectional causal relationship between electrical energy consumption and real GDP in the long run, but only a unidirectional causal relationship from energy to output in the short run. Forecasts indicate increasing consumption of electrical energy, particularly by the residential sector. We suggest that plans by the Government to liberalise the sector should encourage efficiency and innovation in production and distribution which should result in lower prices, as independent suppliers compete to maintain their market shares. Changes in the regulatory environment will also be necessary if such plans materialise. Policymakers will need to pay greater attention to the expected increase in the rate of consumption by the residential sector, as this will help to reduce the imports of oil and depletion of scarce foreign exchange resources by a sector that does not spur economic growth. An increase in energy capacity should be encouraged as contingency planning in the event of a technical or political disruption to fuel imports will be critical, notwithstanding the drive to use more renewable sources of energy.

Over the last four decades, the demand for energy in Barbados—a small developing country in the Caribbean—has grown, as it has pursued policies geared towards greater economic growth and social development. However, its mounting debt burden coupled with the high cost of energy has large economic and financial implications for the country's capacity to achieve its goals in both the near and long terms. First, there is the fact that Barbados, a net importer of not only energy, but food and other vital raw materials, has to devote a growing fraction of its foreign reserves to satisfy its demand for energy. Second, there is a greater recognition that alternative sources of energy and the financing necessary to develop and/or exploit such sources will have to be pursued. Against this background, the Government of Barbados has begun to place greater focus on energy conservation and renewable energy sources. It has designed a course of action, the Barbados Energy Policy (BEP), which outlines how it plans to address issues such as energy efficiency, conservation, energy security and other critical elements that will need to be brought to the fore in Barbados' long-term strategic plans. The BEP includes strategies to mitigate the negative impacts of oil prices and to take advantage of national renewable and non-renewable resources; for example, offering fiscal incentives to encourage the efficient generation of energy from alternative sources; a waste-to-energy project; and implementation of building standards which will encourage energy conservation, among others. It is important, therefore, to ascertain whether there is a casual link between energy and economic growth, given that any constraints placed on energy consumption would have an adverse effect on growth and development if causality runs from energy to GDP only. Although the existence of a relationship between energy consumption and economic growth is now reasonably established in the literature, the direction of causation, that is, whether economic growth leads to energy consumption or energy consumption leads economic growth, remains an unsettled issue. Determination of the specific direction of causality is not merely an issue of empirical interest, but one that has significant policy implications. Four possible relationships have been emphasised in the literature between energy consumption and economic growth: growth; conservation; neutrality; and feedback hypotheses. As noted by Jumbe (2004), among others, if causality runs from energy consumption to economic growth and the relationship is positive—the growth hypothesis—this suggests that an economy is energy-dependent and hence energy consumption leads to growth. On the other hand, a shortage of energy may negatively affect economic performance, leading to a fall in income and employment. If, instead, causality runs from economic growth to energy consumption and the relationship is positive, this implies that an economy is not energy-dependent and hence energy conservation policies may be implemented with no adverse effect on growth and employment (Masih and Masih, 1997). However, it is possible that a growing economy constrained by politics, weak infrastructure, or mismanagement of resources could generate inefficiencies and the reduction in the demand for goods and services, including energy consumption (Squalli, 2007). The feedback hypothesis suggests that energy consumption and real GDP are interrelated and may very well serve as complements to each other. Should this result hold, then shocks, positive or negative, to either one of these variables would have effects, possibly permanent, on the other. Finally, if there is no causality in either direction—the neutrality hypothesis—this implies that changes in energy consumption are not associated with changes in GDP, so that energy conservation policies may be pursued without adversely affecting the economy (Jumbe, 2004). While it would be perhaps ideal, to investigate the interaction between total energy consumption (and its components) and real GDP, the required series, except for the electrical component, are unavailable after 1997, which is insufficient for our empirical purposes. However, Mahadevan and Asafu-Adjaye (2007) suggest that the use of electricity consumption (see studies such as Jumbe, 2004, Shiu and Lam, 2004 and Yoo, 2006) may be appropriate for economies which are heavily reliant on electricity for their energy. Moreover, Ferguson et al. (2000) find that there is a stronger correlation between electricity use and wealth creation for the global economy as a whole than there is for total energy use and wealth creation. Further evidence on the importance of electricity for growth is provided by Enflo et al. (2009). The authors demonstrate that the electrification of Sweden has had a significant impact on long-run energy productivity, particularly in industries which employed electricity for multiple purposes (machinery and chemical industries). This paper thus aims to empirically investigate the causal association between electrical energy consumption and economic growth in Barbados. Electrical energy consumption will also be disaggregated into two sectors, residential and non-residential respectively, to assess their relationship with GDP. Our empirical work is largely derived from the seminal contribution to the energy literature by Stern (1993). Stern's approach examined the relationship between energy and growth by considering the possibility that the relationship may include more complex interactions with capital and labour. Within this context, we employ the techniques of multivariate cointegration, vector auto-regression (VAR), causality testing and innovation accounting. Finally, we forecast energy consumption within the framework of the VAR. The remainder of this paper is organised as follows. Section 2 provides a brief profile of energy consumption in Barbados, focusing on electrical energy consumption. Section 3 presents a select review of the pertinent empirical literature on electricity consumption and economic growth. Section 4 introduces the empirical model, econometric methodology and data sources used in this research paper. Section 5 presents the results and analysis. Section 6 discusses the policy implications. The final section summarises the main findings and provides some concluding remarks.

This paper investigates the relationship between electricity consumption and economic growth in the Barbados economy utilising a neo-classical one-sector aggregate production model. Electrical energy consumption was also disaggregated into two sectors, residential and non-residential respectively, to assess the relationship of consumption by these sectors with growth. Within this framework, we employed the techniques of multivariate cointegration and innovation accounting. The empirical results indicate that there exists a long-run relationship between energy consumption (in total and broken down in sectors) and economic growth in Barbados. More specifically, electrical energy consumption by the non-residential sector acts as a driver of economic growth in the long run. Technology is also a key determinant of economic growth. As it relates to the short-run dynamics, the evidence indicates that electricity consumption by the non-residential sector Granger causes real GDP. Based on the finding that electricity consumption in the non-residential sector is important for long-run economic growth, we propose that any plans to liberalise the electricity market should encourage efficiency and innovation in production and distribution which should result in lower prices, as independent suppliers compete to maintain their market shares. As prices in a liberalised marketplace would more realistically reflect market and cost conditions as a result of competition, there would also have to be changes in the existing regulatory environment to maintain Government's objective of customer protection. Increased liberalisation efforts should be supplemented with a renewed focus on utilising renewable sources in electricity generation.