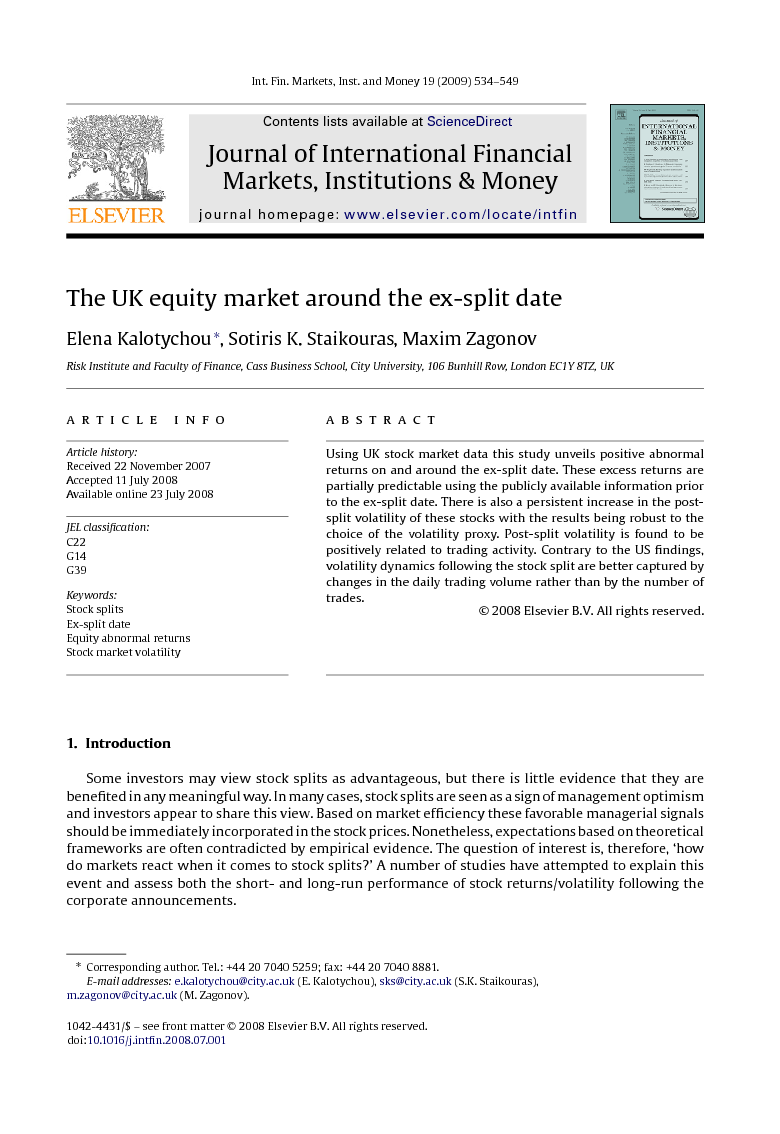 Using UK stock market data this study unveils positive abnormal returns on and around the ex-split date. These excess returns are partially predictable using the publicly available information prior to the ex-split date. There is also a persistent increase in the post-split volatility of these stocks with the results being robust to the choice of the volatility proxy. Post-split volatility is found to be positively related to trading activity. Contrary to the US findings, volatility dynamics following the stock split are better captured by changes in the daily trading volume rather than by the number of trades.

Stock splits have received great attention in the finance literature. Various studies have attempted to explain and examine the existence of the excess risk-adjusted returns and the increase in returns ‘volatility following the split. While most papers concentrate on the stock market behavior around the announcement date, the reality of increased risk-adjusted returns as well as returns’ volatility around the effective date has not been conclusively analyzed. The current work delves into these issues using a sample of stock splits in the UK market. The results suggest that the UK firms experience positive abnormal returns on and around the ex-split date. These abnormal returns may be explained on the basis of information publically available prior to the split ex-date. The model proposed in this paper is able to explain approximately 24% of the market abnormal reaction patterns registered on the ex-date. The analysis of the returns volatility behavior shows that even after controlling for microstructure/market biases, there is a statistically significant increase in the volatility figures following the event date. The latter is unaffected by the choice of the volatility proxies employed. Regression analysis suggests that there is a strong and positive relationship between the measures of trading activity and the returns’ volatility over the pre- and post- split horizons. However, when analyzing the changes in volatility behavior, following the split event, the post-split volatility changes appear to be better captured by the changes in the daily trading volume rather than the daily change in the number of trades. This observation provides evidence leading to a disagreement with the findings reported for the US market where the number of trades is found to be the key measure determining the volatility behavior.