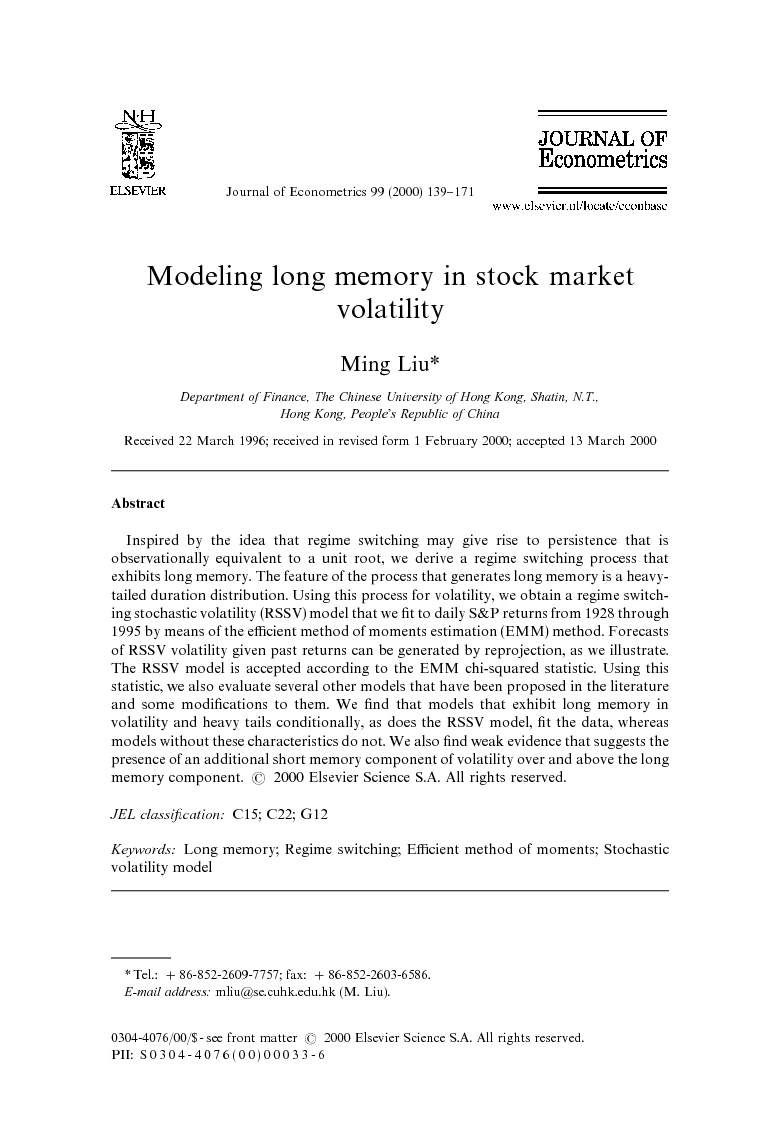 Inspired by the idea that regime switching may give rise to persistence that is observationally equivalent to a unit root, we derive a regime switching process that exhibits long memory. The feature of the process that generates long memory is a heavy-tailed duration distribution. Using this process for volatility, we obtain a regime switching stochastic volatility (RSSV) model that we fit to daily S&P returns from 1928 through 1995 by means of the efficient method of moments estimation (EMM) method. Forecasts of RSSV volatility given past returns can be generated by reprojection, as we illustrate. The RSSV model is accepted according to the EMM chi-squared statistic. Using this statistic, we also evaluate several other models that have been proposed in the literature and some modifications to them. We find that models that exhibit long memory in volatility and heavy tails conditionally, as does the RSSV model, fit the data, whereas models without these characteristics do not. We also find weak evidence that suggests the presence of an additional short memory component of volatility over and above the long memory component.

It is now more or less commonly understood that financial time series can exhibit significant persistence in volatility. To model this persistence, we have most notably a large family of ARCH models, starting from Engle (1982). Recently, people have begun to realize that the observed persistence can be better captured by long memory processes as shown by the studies of Ding et al. (1993), Harvey (1993), Baillie et al. (1996), Bollerslev and Mikkelsen (1996) and Breidt et al. (1998), among others. All of these studies suggest that the correlation of the volatility of the return series decays slowly in a hyperbolic way, instead of exponentially as implied by any traditional model in the ARCH family. The existence of long memory, especially in an economic time series, has been understood to arise from the aggregation of a cross section of time series. Granger (1980) proposed that the aggregation of a cross section of time series with different persistence levels would introduce long memory. His argument was used by Haubrich and Lo (1991) in explaining the long memory pattern in business cycles. Recently, the argument was used by Andersen and Bollerslev (1997) in studying the relationship between long memory in volatility and the aggregation of different information flows. The ingenuity of the Granger argument lies in the Beta distribution that he imposed on the distribution of the different persistence levels of the aggregated time series. As the number of aggregated series goes to infinity, Granger (1980) showed that the aggregation series exhibits the long memory pattern. In this paper, we propose regime switching as another explanation for the observed long memory. As the regime switches in a heavy-tail manner, that is, when the duration of the regimes has a heavy-tail distribution, the long memory pattern appears in the autocorrelation function of the time series. This idea is applied to the case of stock market volatility. We construct a model, which we call the regime switching stochastic volatility (RSSV) model, to model the long memory pattern in stock market volatility. We argue that the arrival of major news triggers volatility jumps or switches in stock market volatility. In particular, when different news arrive at the market in a heavy-tail fashion, we observe long memory in the stock market volatility. Diebold (1986) and Lamoureux and Lastrapes (1990), among others, pointed out that exogenous deterministic structural change could give rise to persistence observationally equivalent to that of the GARCH model. Hamilton and Susmel (1994) and Cai (1994) attach an endogenous regime switching component to the original ARCH models to study the potential impact of regime switching on the stock return dynamics. With both the ARCH component and the regime switching component in their model, their studies suggest that most of the observed persistence in the volatility process may actually come from the persistence of the regime. Our argument can be considered an extension of the above regime switching argument. The regime switching model we use, however, differs from the Hamilton regime switching model. Instead of modeling regime switching as a transition according to a Markov transition matrix, we model regime switching as a transition across i.i.d. regimes with the duration of each regime distributed according to a certain probability law. Under the assumption that the duration of a regime is distributed as any heavily tailed distribution,1 we show that we have long memory with a magnitude determined by the tail index of this distribution. As a result, RSSV model proposed in this paper generates the long memory behavior in volatility as observed in the stock market. Although algebraically quite maneuverable, the inference of the RSSV model is not simple. A simulation-based indirect inference method, specifically the EMM estimation, is employed to investigate the empirical relevance of the proposed model. The result of our estimation is quite positive. We find that the duration of a regime is considerably heavy-tail distributed and we cannot reject the hypothesis that the observed stock price dynamics actually arise from the RSSV model. The estimated heavy-tail index is also compared with the estimated long memory coefficient and we cannot reject the proposition that the observed long memory is a consequence of regime switching. The paper is organized as follows. In Section 1, based on a mathematical argument of Levy (1983), we present the basic assumptions and the mechanism by which a regime switching model can imply long memory. In Section 2 we propose the regime switching stochastic volatility model and derive the functional limit of its integrated series as the sample size goes to infinity. In Section 3 we go over the basics of the EMM estimation and show our empirical results. Section 4 concludes the paper.