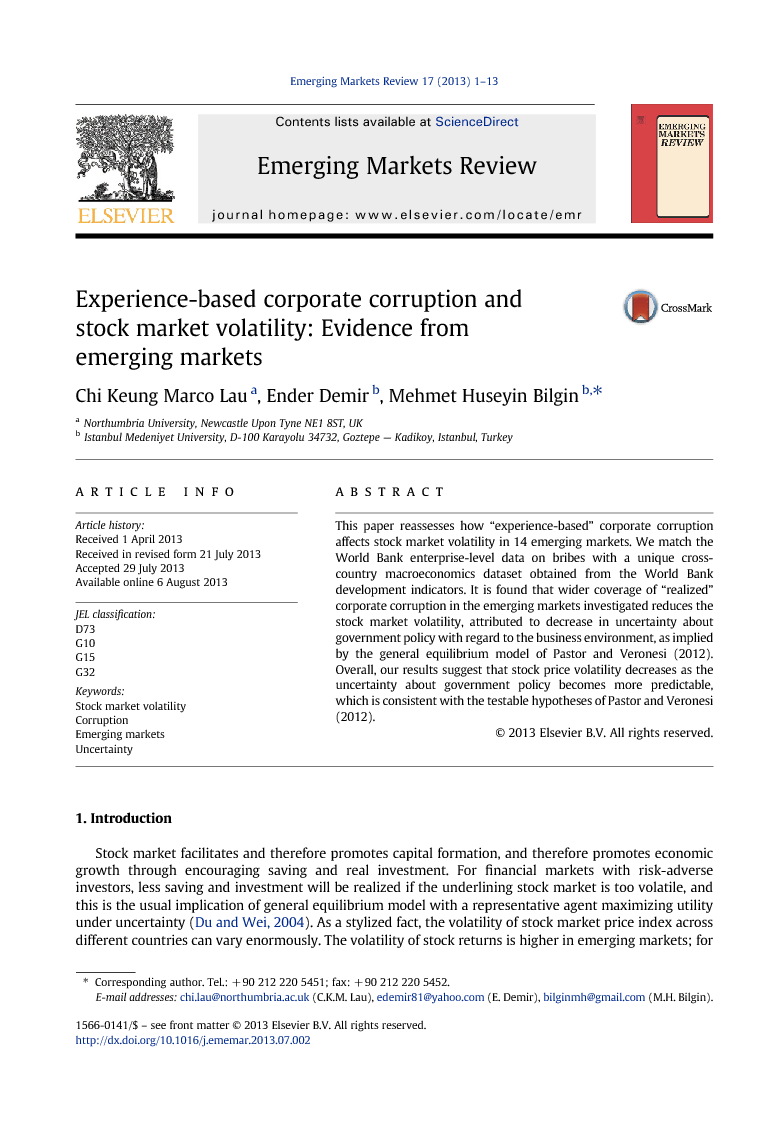 This paper reassesses how “experience-based” corporate corruption affects stock market volatility in 14 emerging markets. We match the World Bank enterprise-level data on bribes with a unique cross-country macroeconomics dataset obtained from the World Bank development indicators. It is found that wider coverage of “realized” corporate corruption in the emerging markets investigated reduces the stock market volatility, attributed to decrease in uncertainty about government policy with regard to the business environment, as implied by the general equilibrium model of Pastor and Veronesi (2012). Overall, our results suggest that stock price volatility decreases as the uncertainty about government policy becomes more predictable, which is consistent with the testable hypotheses of Pastor and Veronesi (2012).

This paper investigates the impact of corruption on stock market volatility in 14 emerging markets with a time period span of 2006 to 2012 along with other detrimental factors like the volatility of fundamentals and the maturity of the stock markets. In this study we extend the model of Zhang (2012) by adding additional control variables. The variable that we use for the corporate corruption measure is from Enterprise Survey of World Bank, which is the “percentage of informal payments to public officials”. Unlike other measures such as political events or elections, corporate corruption has continuous and substantial impact on the operations of firms. Corporate corruption is a natural candidate to be that variable to proxy the uncertainty of firms evolving in the business environment. Zhou and Peng (2012) discuss that bribery may either grease the wheel of commerce or sand the wheel of growth. The literature provides evidence in favor of both views. Nevertheless, our analysis was limited by the sample size of 14 countries; we can include more countries in the future when the World Bank updated their database, to enable researchers to use a longer panel dataset. Another extension could be adding more cultural and business ethical variables or non-state welfare supports such as families and religions, as suggested by Cheung et al. (2012), to moderate the effects of firms' bribery. Future researchers may also have to incorporate shareholders–manager relationship as a moderator for bribery into the model. By using the World Bank Enterprise Surveys of 2002–2005, Ramdani and Witteloostuijn (2012) show that firm bribery is more likely to happen if the principal-owner of the firm is male. Another fruitful extension could be the linkage between market volatility and firm's hedging decision (Lau and Bilgin, 2013). Our analysis provides insight into the literature of stock market volatility and asymmetric information of agents. We find that countries with higher corrupted business environment do have less volatile stock markets, even after controlling liquidity and maturity of the markets, firm characteristics, and economic variables. The investors consider bribery as a factor reducing the uncertainty that firms are facing. Therefore, when there is wider converge of corporate corruption, the stock market volatility decreases. The reason is that now it becomes easier to predict the outcome of the government policy change, and hence eliminate the uncertainty that it imposes on a firm's performance.