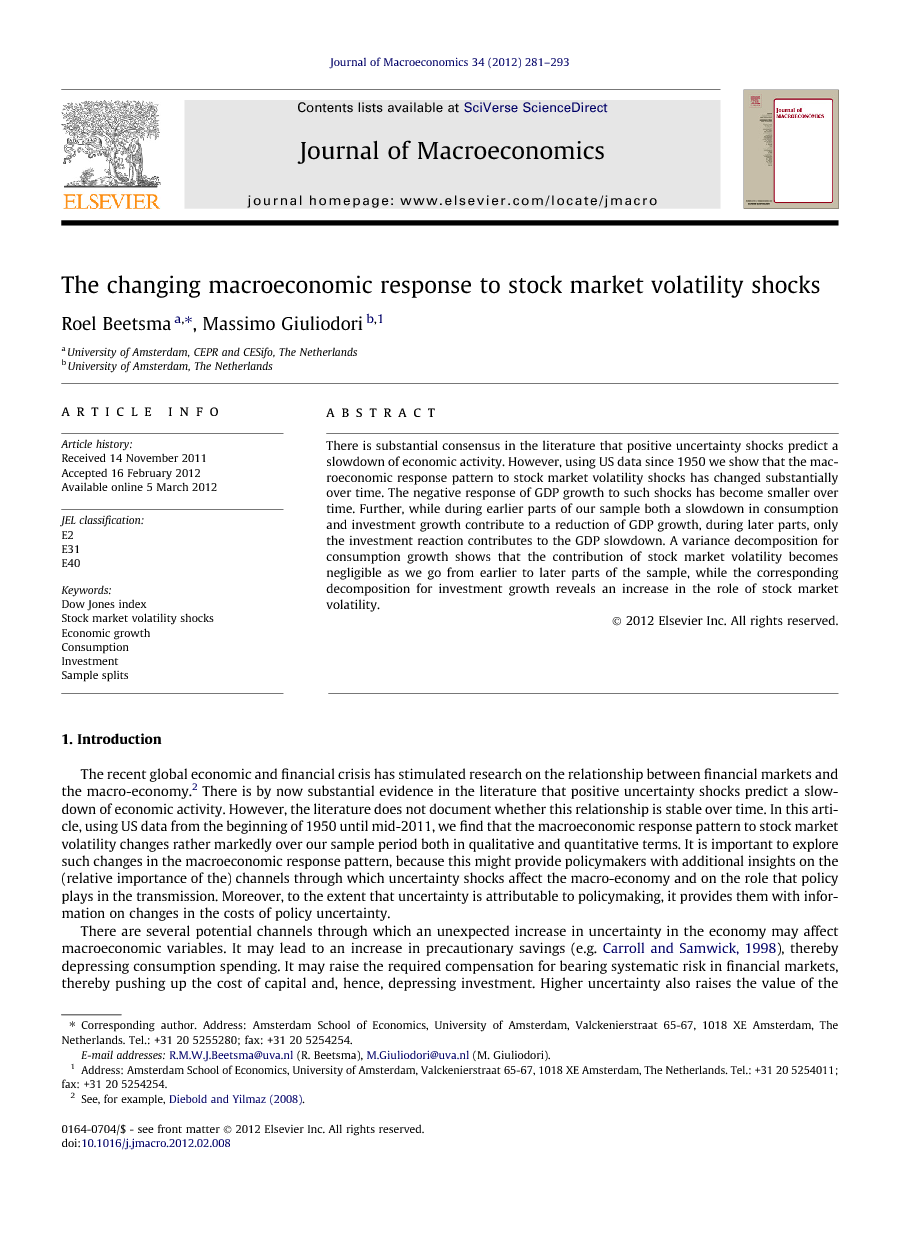 There is substantial consensus in the literature that positive uncertainty shocks predict a slowdown of economic activity. However, using US data since 1950 we show that the macroeconomic response pattern to stock market volatility shocks has changed substantially over time. The negative response of GDP growth to such shocks has become smaller over time. Further, while during earlier parts of our sample both a slowdown in consumption and investment growth contribute to a reduction of GDP growth, during later parts, only the investment reaction contributes to the GDP slowdown. A variance decomposition for consumption growth shows that the contribution of stock market volatility becomes negligible as we go from earlier to later parts of the sample, while the corresponding decomposition for investment growth reveals an increase in the role of stock market volatility.

The recent global economic and financial crisis has stimulated research on the relationship between financial markets and the macro-economy.2 There is by now substantial evidence in the literature that positive uncertainty shocks predict a slowdown of economic activity. However, the literature does not document whether this relationship is stable over time. In this article, using US data from the beginning of 1950 until mid-2011, we find that the macroeconomic response pattern to stock market volatility changes rather markedly over our sample period both in qualitative and quantitative terms. It is important to explore such changes in the macroeconomic response pattern, because this might provide policymakers with additional insights on the (relative importance of the) channels through which uncertainty shocks affect the macro-economy and on the role that policy plays in the transmission. Moreover, to the extent that uncertainty is attributable to policymaking, it provides them with information on changes in the costs of policy uncertainty. There are several potential channels through which an unexpected increase in uncertainty in the economy may affect macroeconomic variables. It may lead to an increase in precautionary savings (e.g. Carroll and Samwick, 1998), thereby depressing consumption spending. It may raise the required compensation for bearing systematic risk in financial markets, thereby pushing up the cost of capital and, hence, depressing investment. Higher uncertainty also raises the value of the option-to-wait in making irreversible investment decisions, thereby slowing down investment expenditures (e.g. Bernanke, 1983, Dixit and Pindyck, 1994 and Bloom et al., 2007). The same is true for durable consumption goods. Finally, it is sometimes argued that higher (stock) market volatility reflects enhanced uncertainty about future cash flows and discount rates that result from expected resource-consuming structural changes that depress GDP growth (see Campbell et al., 2001). Hence, in a regression of GDP growth on lagged stock market volatility, the latter variable is expected to enter with a negative coefficient. This paper draws on different strands in the literature. There is an earlier strand in the finance literature that explores the link between output growth and stock market volatility, see, in particular, the work by Campbell et al. (2001) and Guo (2002).3 In contrast to these works, we employ a multivariate vector auto-regression (VAR) methodology that also controls for monetary policy and inflation. This paper is closely related to the more recent contributions that explore the relationship between uncertainty and economic activity. These include Bloom, 2009 and Alexopoulos and Cohen, 2009 and Knotek and Khan (2011). While Bloom (2009) measures volatility on the basis of shocks to the stock market, the latter two articles use also a second measure based on the number of articles in the New York Times that contain simultaneous references to uncertainty and the economy. In our analysis we use stock market volatility as a measure of uncertainty as it is readily available over a long period of time.4 In addition, this measure of volatility leaves us with sufficient observations for our sub-sample analyses. The latter two articles also delve deeper into the transmission channel from volatility to growth by exploring the response of investment and different components of consumption to a change in volatility. In contrast to the aforementioned works, we thus explore how the transmission changes over time. To this end we use a longer sample period than recent articles studying this transmission. Our estimates over the entire sample period confirm that an increase in US stock market volatility is followed by a slowdown of US real GDP growth. The main channel responsible for this finding is a slowdown of investment growth, although also consumption growth deteriorates after a volatility shock. Further, we find that both inflation and the federal funds rate tend to fall after the shock. Finally, the stock market return reacts negatively to the volatility shock, which suggests that this may be the main channel through which stock market volatility affects output growth. However, a counterfactual experiment in which we shut off the feedback from volatility onto the return confirms that the volatility measure has an independent, although reduced, effect on output growth. These findings are robust to using alternative measures of the stock market index (e.g. dropping or using only the most extreme volatility observations) and altering the VAR ordering and specifications. If we split our sample, we find remarkably different results for the two sub-samples. Based on the literature we select as the breakpoint the first quarter of 1984. The negative response of GDP growth is substantially smaller during the second sub-period. Further, while during the first sub-period both a slowdown in consumption and investment growth contribute to a slowdown of GDP growth, during the second sub-period, only the investment reaction contributes to the GDP slowdown. These findings are also confirmed by rolling regressions. A variance decomposition shows that, going from the first to the second sub-period, the contribution of stock market volatility becomes negligible for consumption growth, while its contribution in the case of investment growth increases substantially. The role of the federal funds rate shrinks substantially for both variables. The remainder of this paper is structured as follows. In the next section, we present our empirical specification, discuss the impulse responses that it produces, and test the robustness of the volatility – growth relationship when estimated over the full sample period. Section 3 explores the stability of the estimated relationships over time. Section 4 delves deeper into the potential transmission channels of stock market volatility and how they change over time. Finally, Section 5 concludes this paper.

In this paper we have explored the changing role of stock market volatility for US GDP growth and its main components over the period going from the beginning of 1950 until mid-2011. Our baseline model is a VAR that includes a macroblock with GDP growth, inflation and the federal funds rate and a stock market block with the stock market return and its volatility. For our full sample we confirm the rather common finding that an increase in US stock market volatility leads to a slowdown of US real GDP growth. We also find such a slowdown for each of our sub-sample periods. However, the fall in output growth in the first sub-period is much larger than during the second sub-period. During the first sub-period both a drop in consumption and investment growth contribute to the slowdown in GDP growth although the drop in investment growth is much larger. During the second sub-period, only a reduction in investment growth contributes to the fall in GDP growth. Regressions with a rolling window over the entire sample period confirm this pattern. A variance decomposition for consumption growth shows that, going from the first to the second sub-period, the contribution of stock market volatility becomes negligible, while the corresponding decomposition for investment growth reveals an increase in the role of stock market volatility. Several directions for further research present themselves rather naturally. An obvious direction is to extend the empirical analysis of this paper to more countries to see whether the consequences of an increase in stock market volatility found for the US are also found for other countries and, in particular, whether the changing response pattern for the US is confirmed for other countries as well. Eventually, one would want to build a theory that can account for the most salient empirical findings.