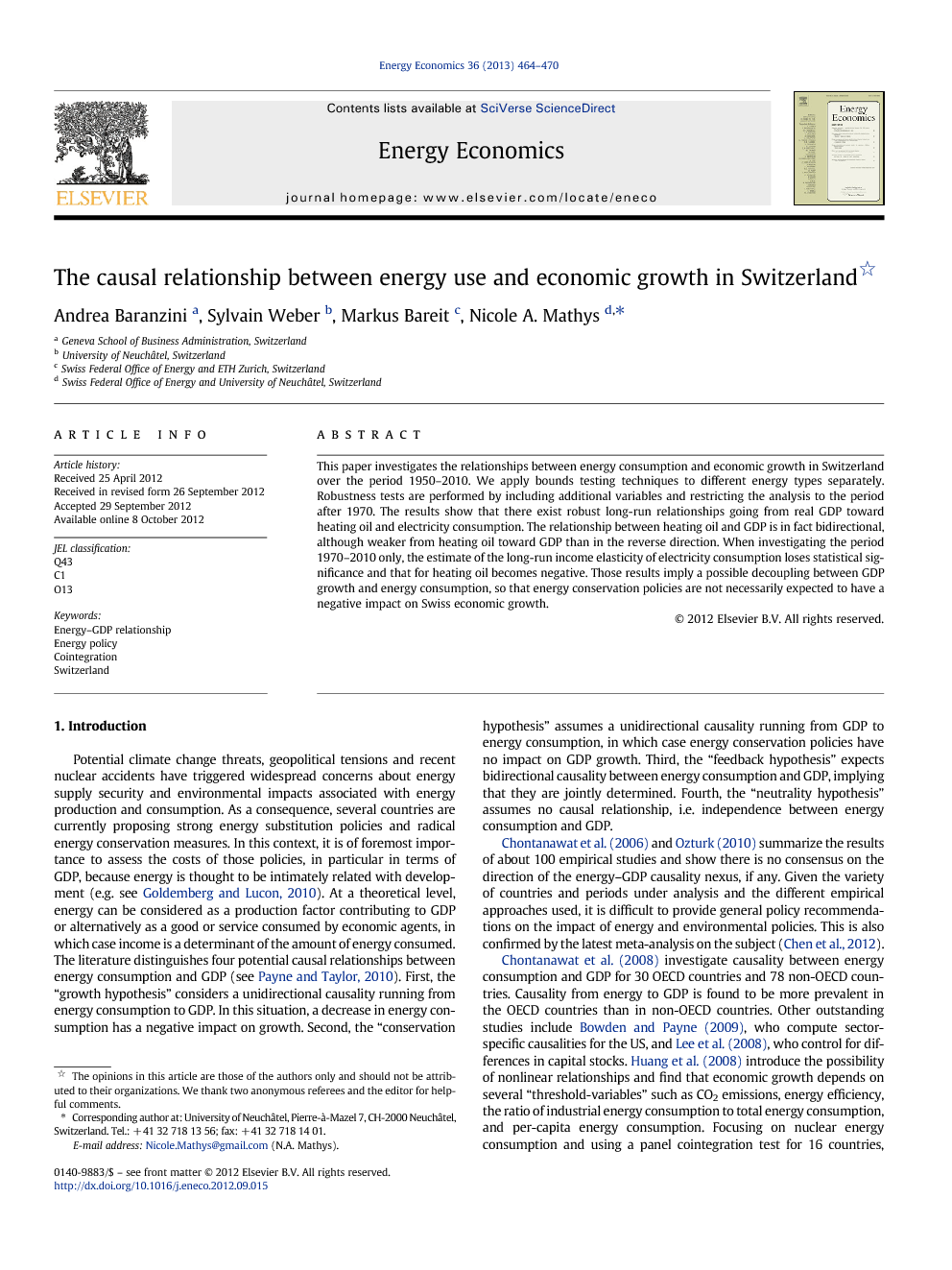 This paper investigates the relationships between energy consumption and economic growth in Switzerland over the period 1950–2010. We apply bounds testing techniques to different energy types separately. Robustness tests are performed by including additional variables and restricting the analysis to the period after 1970. The results show that there exist robust long-run relationships going from real GDP toward heating oil and electricity consumption. The relationship between heating oil and GDP is in fact bidirectional, although weaker from heating oil toward GDP than in the reverse direction. When investigating the period 1970–2010 only, the estimate of the long-run income elasticity of electricity consumption loses statistical significance and that for heating oil becomes negative. Those results imply a possible decoupling between GDP growth and energy consumption, so that energy conservation policies are not necessarily expected to have a negative impact on Swiss economic growth.

This paper investigates the relationships between energy consumption and real GDP per capita in Switzerland over the period 1950–2010. We find that there exist separate long-run relationships from GDP toward transport fuel, heating oil and electricity consumption. In the other direction, a relationship running from heating oil toward GDP is also established, but it is less robust. Hence, the empirical evidence points to a unidirectional causality from GDP toward the consumption of different energy types, mainly heating oil and electricity. Over the whole observation period 1950–2010, real GDP is found to boost electricity consumption. If analysis is limited to the period 1970–2010, this long-run elasticity is no longer statistically significant, while heating oil consumption is even decreasing as real GDP increases. This gives hope that energy consumption can be decoupled from economic growth. From our analysis, we therefore deduce that energy conservation policies would not necessarily impede economic growth. In the current context, where CO2 regulation is being largely discussed and nuclear power is going to be phased out, these findings appear encouraging. Further research should try to model specific energy demands (see for example Baranzini and Weber, 2012, for transport fuel demand). This should be done both for households and for industries by introducing additional determinants and specifically addressing energy substitution possibilities, energy efficiency measures and possible structural breaks.